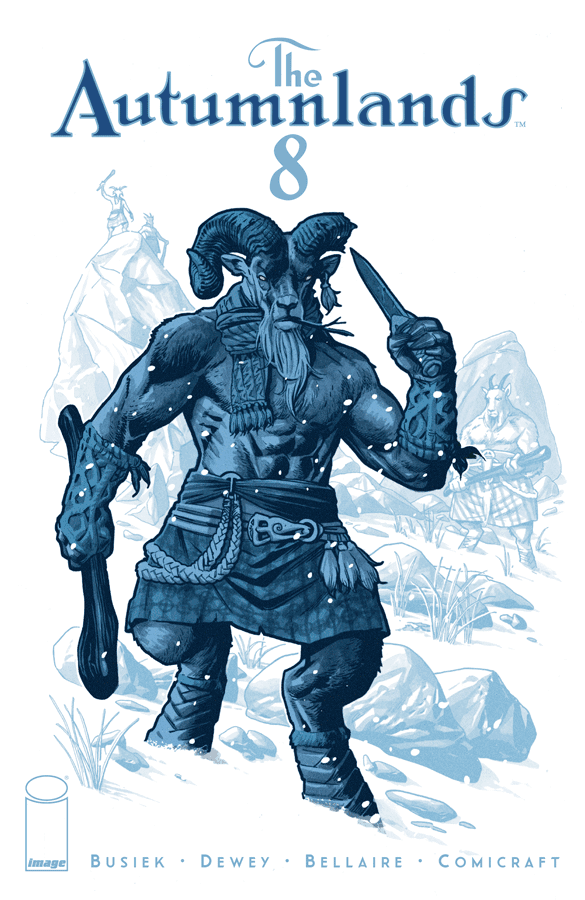 Last time, Learoyd and Dunstan were separated from the survivors of Keniel and fled into the mountains, away from the hostile Bison tribe. Now, they must find a way to reach the Floating Cities and recover Learoyd’s lost memories. Unfortunately for them, Bisons aren’t the only danger in the Autumnlands.

Benjamin Dewey and Jordie Bellaire make a glorious team. With Dewey’s detailed characters and settings, plus Bellaire’s lush, watercolor-like coloring, the art creates an engrossing world. There are so many examples that it’s hard to choose from.

The cover is interesting. Blue is associated with peace and tranquility, yet it’s used to color ram men armed to the teeth. Along with the snowy mountain, the scene becomes one of danger, suggesting grim times to come. Yet, there is also beauty. Pages 2-3 show a sunrise over the valley Learoyd and Dusty sleep in. The yellow ball of the light and the multi-shades of blue in the sky are breathtaking. As Learoyd explores the valley, the reader gets a view of the beautiful, detailed environment. Exploration is emphasized in this issue, and the art team creates a world readers could look at for days.

On pages 4-5, Learoyd discovers a golden canopy. A woman dressed like Dejah Thoris is served lunch by her robotic hornets. Turns out, she is the driver of the giant, robotic insect from last issue. What is so wonderful about this scene is not just how great the art looks, but also the classic sci-fi and fantasy that it pays homage to. Genre savvy readers can already tell the many influences that went into The Autumnlands, including Tolkien, Edgar Rice Burroughs, Robert E. Howard, and Philip K. Dick. Nudges like this to those influences make the art that much more enjoyable.

None of this art would matter without an equally great story, and Kurt Busiek delivers the goods. The above scene reveals some hints here and there about who Learoyd is. Also, it makes the reader question the Autumnlands’existence. So far, readers could guess that Learoyd was a soldier from a technological past brought to a magical future. That might not be the case anymore. The woman seems to be from the same past as Learoyd. One can say that she’s just a figment of his imagination, but she refers to the “Ramblelands” at some point, and there is no way that it could not be a play on the Autumnlands. Is Learoyd really from the past? Are the Autumnlands actually real? It’s a mystery, and one a real motivation to keep on reading.

Learoyd and Dunstan’s relationship continues to blossom. They share a lovely lunch, laughing and talking, and Learoyd also comforts Dusty when he is feeling sad. It never stops to amaze how the animal people feel so human and relatable. As said before, exploration is a key theme in this issue. Busiek gives Dewey plenty of space to show off the world while he tells the story through exposition and dialogue without slowing the pace down. The best scene by far is the fight between Learoyd and the ram men. It is face-paced and easy to follow. It is as visceral as any movie.

Before the fight, Dusty tries to solve the matter peacefully without conflict. This scene seems to lend to a powerful message that is evolving throughout the series run: the failure of civilized societies. Learoyd’s world was a technological society torn apart by conflict (as it seems), and the Autumnlands are experiencing the same situation. Both were civilized and advanced in their own ways, but have cracks in the surface. The Autumnlands is an oligarchy where classism is enforced to give as much power to the sorcerers in floating cities as possible. This led to the abuse of those that live on the ground still, not just the Bisons, but the Ram tribe as well. They hate sorcerers. They ignore Dusty’s peaceful greetings and attack him and Learoyd. There is a bit of wisdom from his father Dusty recalls:

“Be calm, wear a friendly face, and show that you threaten no one. Of any ten strangers, fully eight will do the same. But it’s the other two of ten…that a wise man is wary of.”

This seems to imply it only takes a few fanatics to spoil peace. But Dusty’s father was as much a part of the system that exploited the land dwellers as the other sorcerers, so his wisdom is suspect. The Rams aren’t just fanatics. Their exploitation at the hands of the sorcerers gives them a reason to hate Dusty and Learoyd, even though they aren’t bad guys. Like in real life, The Autumnlands’ morality is not black as coal or white as snow. It is the gray of clay and it smears everywhere.

With great art and complex storytelling, The Autumnlands continues to be one of the best sci-fi/fantasy books on the shelves. Even though it is only 8 issues in, big things are already on the horizon for the story that will make it an instant classic.