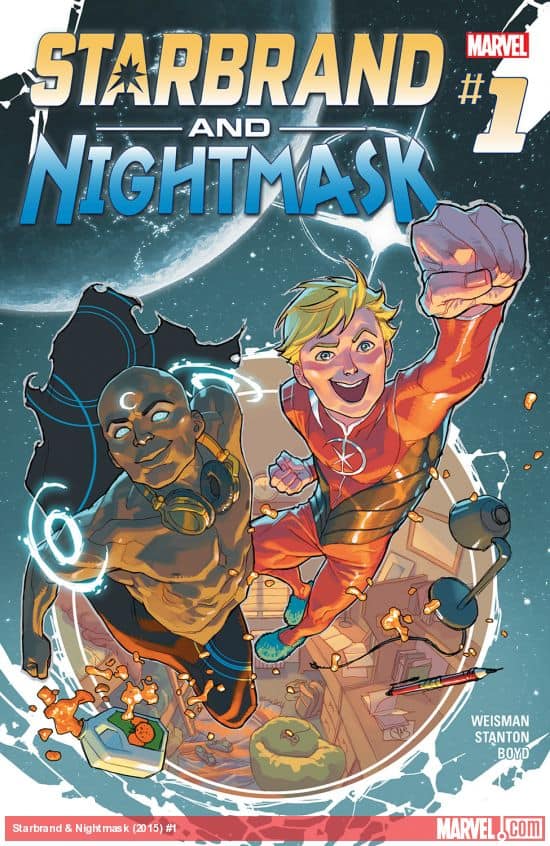 Starbrand and Nightmask are getting an all-new lease on life in their first series together that’s a departure from their roots as far as the New Universe and the previous Avengers run is concerned.

Being a college freshman myself this book has all the accessibility I could ask for. Both Kevin and Adam are juggling traversing the Superflow, (Defined as the “extra-dimensional dreamscape. A shortcut between any two points in space”) and trying to figure out how two people who have traveled all over the Multiverse can survive in a “motel-sized” college dorm. It’s all there to give the book its own identity in the Marvel Universe. Both heroes are given unique viewpoints, and Greg Weisman throws ideas out there we normally don’t see in the current crop of Marvel books. Early in the book, the duo has a chance to join a high-profile superhero team, but, of course, they decide college is the best choice and the reasoning works in favor of things we already know given Starbrand’s role in the universe. We normally don’t see Heroes of their caliber deny the chance to do more super-heroic acts in favor of furthering your education, but if Peter Parker and Squirrel Girl can, then it should be a cakewalk right?

Domo Stanton and Jordan Boyd bring variety and the right mix of both usual heroics when the cosmic duo fight crime in China as well as just regular college students exploring the hallways of the dorms. The cast looks and has the feel of actual college freshmen and carries a sense of joyfulness and realism even with Adam technically being three-years old. The villains are old favorites we haven’t seen in along while and bring a sense of familiarity and new wonderment given the history of the villainous duo. That’s where Starbrand & Nightmask shines, it’s a title that acknowledges its roots, yet isn’t defined by the choices of the previous events that transpired in Jonathan Hickman’s Avengers run.

See also  Television that Home Video Forgot: Do Over (2002)

Being at a college is a stepping stone for Kevin, and while his power isn’t downplayed by any means because of the more grounded threat it’s nice to see both himself and Adam combat each new situation differently. (Fun fact: They’re in dorms that are co-ed!) We see the supporting cast begin to take shape and it definitely holds to the statement you’ll meet all types of people in college. You can feel the type of stories the entire team can tell with both cosmic and realistic threats. Starbrand and Nightmask can hold its own as its own thing, but even with the guest stars you can feel the strings of connections to the wider Marvel Universe. It’ll be interesting going forward to see how the two heroes can combat both classes and villains all over campus in this new series.