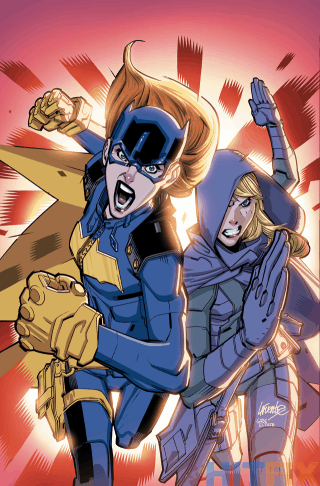 Like Barbara Gordon’s agile mind and dancer-like fighting form, writers Cameron Stewart and Brenden Fletcher tend to balance several plot threads in each Batgirl issue, and this one is no exception. The three main ones are real estate developers using teenagers in various street gangs to drive out tenants so they can gentrify Burnside, Stephanie Brown aka Spoiler getting a bounty put on her because she witnessed Eiko Hasigawa (Catwoman’s lover during Genevieve Valentine’s run on the book) executing mob leaders, and also her continued lapses of memory, which might have led to a scientific breakthrough. Although, Stewart and Fletcher’s plot has a lot of moving parts, it comes organically out of character relationships and the dark, lovely world they have crafted through thirteen issues with artist Babs Tarr, colorist Serge Lapointe, and other collaborators.

The main relationship that they focus on in Batgirl #46 is Barbara and Frankie’s as she discovers that Frankie has a special cybernetic implant on her neck that allows her the use of her legs to fight crime. Barbara is a little worried, but Frankie puts her at ease with a passionate about her love for Gotham and her desire to overcome her disability and fight crime. And Tarr’s art gets pretty cute with Frankie’s big damn hug of Barbara after she calls her “Partner”, and a dorky shot of Frankie flexing herself while taunting all would-be evil doers of Gotham. Batgirl does deal with serious real life issues, like teens from low income families getting involved in gangs, and has some pretty tough supervillains, but it never loses its humor or sense of fun. And Spoiler’s dry quips fit in its world as she takes on a little sister in crime fighting role to Barbara after meeting and sparring with her in Batgirl Annual #3. 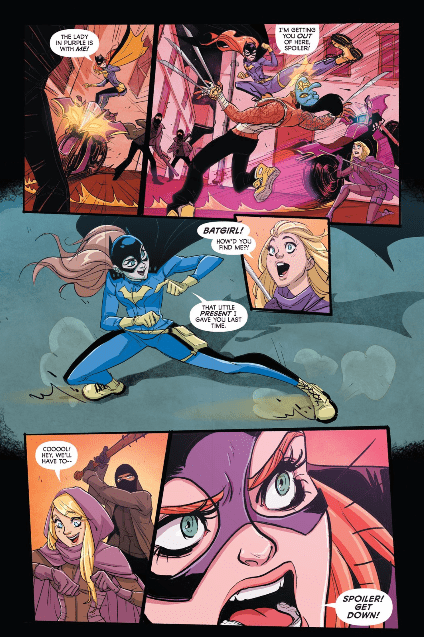 Babs Tarr a chance to have a kind of superhero artistic team-up with We Are Robin‘s layouts artist Rob Haynes for a dessert of a one on one duel. Serge Lapointe applies the base coating of red, blue (which mix into), purple and uses single background colors to punch things up. Tarr goes a little cartoonish and gives Mokugeki huge Wolverine style claws that he activates when Spoiler chooses the red card that he holds up. (He and Nuke and Morpheus probably have weekly red wine parties about their shared interest.) And Haynes does the rest with panels that cut and flip, introducing a little black between the gutters once the going gets tough, and Batgirl shows up with quips and fierce facial expressions courtesy of Stewart, Fletcher, and Tarr. It’s a fun fight to watch unfold, and Batgirl and Spoiler defeat the ninjas through their minds, not their martial arts skills with a future conflict with Hasigawa down the road once they realize her bluff. The action sequence also cements Barbara and Stephanie’s connection as sisters in arms even though Stephanie acts a little bratty around her like saying she didn’t need help. But she is genuinely happy to get the opportunity to crash in Luke Fox’s apartment aka safehouse. (But based on her actions in Batman Eternal and Batman and Robin Eternal.)

But the conflict with the Hasigawas and even the threat of gentrification are just small parts in a larger scheme that Cameron Stewart and Brenden Fletcher have been devising since the introduction of A.I. elements and gaps in Barbara’s eidetic memory in their first arc. In little snatches of conversation with her friend and fellow student Nadimah and boyfriend Luke Fox, Barbara talks about her nightmares and stressful feelings that go beyond her balancing graduate school, superheroics, and having a social life. Tarr’s art is more heavily rendered as she talks about something staring into her soul. Batgirl #46 has a fun friendship moments, adorable art from Babs Tarr, a kick-ass fight scene, and hints at mystery plot line and foe that could create a seismic shift in this title down the road.