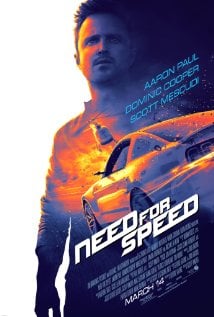 The new film Need for Speed does not deserve its lead actor, as he proves in a number of the dramatic moments. Even those audience members not familiar with Aaron Paul’s outstanding work on the AMC drama Breaking Bad would likely notice the straining-at-the-seams emotional style he brings to his character here, which is somewhat unexpected in a movie that essentially wants to kickstart its own The Fast and the Furious-esque franchise. Those movies, like Need for Speed, boast plenty of pedal-to-the-metal street racing, outrageous stunts, beautiful women, more racing, more stunts, and so on. Need for Speed, however, tries too hard to be a real, grounded story of revenge and hate, too often tippling over into melodrama.

Paul plays Tobey Marshall, a mechanic presented with a tantalizing offer by an old racing foe, Dino Brewster (Dominic Cooper), who’s reached stardom since leaving their quiet New York town: rebuild an historic Ford Mustang and collect a hefty fee. But Tobey and Dino’s longstanding rivalry leads them to take part in an illegal street race that ends with a third man dead, and Tobey framed for his murder. Once he leaves prison two years later, Tobey wants revenge in the form of a secretive race called the Deleon, created by an Internet radio-show host/rabble-rouser of sorts (Michael Keaton), so he can both beat Dino behind the wheel and hopefully clear his name. But really, all of this is a meager clothesline on which to hang a bevy of racing sequences. 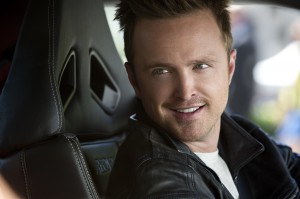 Thankfully, most of those setpieces are well-staged by director Scott Waugh. Also, Need for Speed doesn’t seem terribly beholden to its video-game roots, although there are a few first-person point-of-view shots behind the wheel in Tobey’s first race. It’s clear that many, if not all, of the stunts in this film were pulled off for real; when Tobey’s souped-up Mustang dives over an embankment and lands on the ground next to it, the camera attached to the hood lands with a thud. Though there’s likely some CGI trickery on display—Paul, Cooper, and the other actors couldn’t have been driving these vehicles through every stunt, no matter how many practical effects are employed and how often Waugh cuts to them inside the vehicles—it’s masked quite well. And considering how much of this film takes place when characters get into various and sundry cars, there’s no trace of chintzy rear-projection green-screen effects either. The one major technical demerit, however, is that Need for Speed’s postconversion into 3D, whether it took a purported six weeks or six months, is both useless and distracting. Though Tobey and his Mustang do most of the racing in the daylight, the first few big sequences take place at night, and the 3D only muddies the image. As it goes with just about every 3D postconversion these days, this one serves no purpose.

The script, by George Gatins, covers a vast number of familiar clichés: there is the stuffy bank employee who we see ready to pounce on Tobey’s body shop, once owned by his late father; and the younger brother (here in spirit, if not physically) who clearly idolizes Tobey and yet, will find a nasty end quickly enough; and the bitter rivalry that inevitably ends with somewhat less rancor than would be expected. The script’s laziness and inconsistency aside (though it’s difficult to balance the Tobey who is heartbroken at the accident he’s accused of committing due to reckless driving, and the Tobey who gleefully indulges in some…reckless driving even before the Deleon), the young cast tries desperately to rise above the familiarity. Even in the more would-be operatic moments, Paul acquits himself nicely; plus, he’s allowed much more levity here than he ever had on Breaking Bad, when working with Imogen Poots, as Tobey’s obvious love interest. And among his crew, there’s another talented up-and-comer, Rami Malek. Cooper glowers adequately, but Dino is a poorly written and underdeveloped baddie, separated from the rest of the pack primarily because, unlike Tobey and his white T-shirts, he wears black and appears damn proud of it. Finally, there’s Keaton, who manages to be charming in an almost Nicholsonian manner in a few moments (though his oversized sunglasses likely add to that aura); still, it’s a disappointment that he’s confined to literally one tiny office, mostly seen via webcam. An actor as wily and dexterous as Michael Keaton needs to roam a little freer. 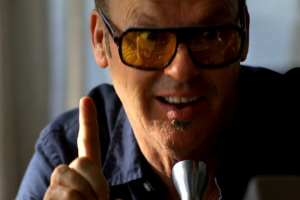 Need for Speed is either unwilling or unable to break free of convention, but as an ostensible knock-off of The Fast and the Furious, it’s arguably adequate. (That series, to its credit, has an identifiable theme of family, though it is to the same series’ demerit that said theme is vocalized roughly eight million times per film.) The action sequences, save one near the third act, are not as death-defying or insane as those in The Fast and the Furious franchise, but there is more of an attempt to tell a full story in Need for Speed. In the end, of course, what matters more is that the cars drive fast and the drivers present themselves with some modicum of personality. In the hands of another actor, this film would falter almost entirely, cool racing bits aside. And though Aaron Paul should be in better, bigger action movies, this is at least a start. 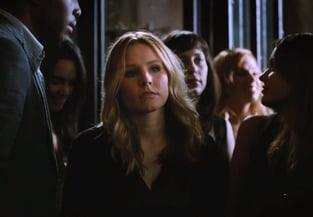 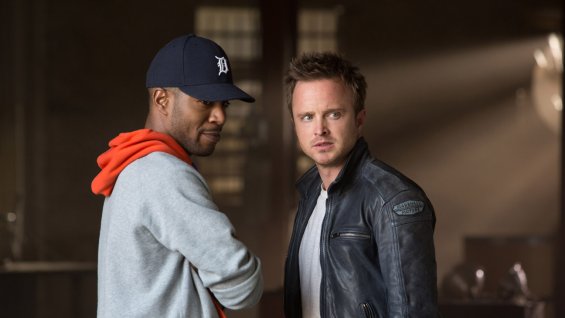