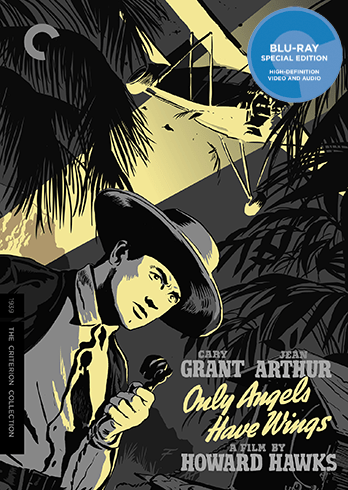 Only Angels Have Wings
Written by Jules Furthman
Directed by Howard Hawks
USA, 1939

The difficulty in picking a definitive Howard Hawks film is that there are so many strong contenders. From his westerns to his screwball comedies, Hawks repeatedly applied regular themes, characterizations, situations, and, less obviously (because his visual style was so unassuming), similar formal features. To the list of potential qualifiers add Only Angels Have Wings. Released a year after Hawks’ classic—though at the time generally panned—Bringing Up Baby, this 1939 film surely meets the checklist of Hawks requirements. But it also brings something new to the table. That distinction emerges in its unique categorization and a resulting unbounded organization. Broadly, the film is a drama, but it is both more and less than that, and it doesn’t fully adhere to any strict genre conventions. In many ways, there really isn’t anything in Hawks’ canon quite like Only Angels Have Wings, even with its defining auteurist attributes. 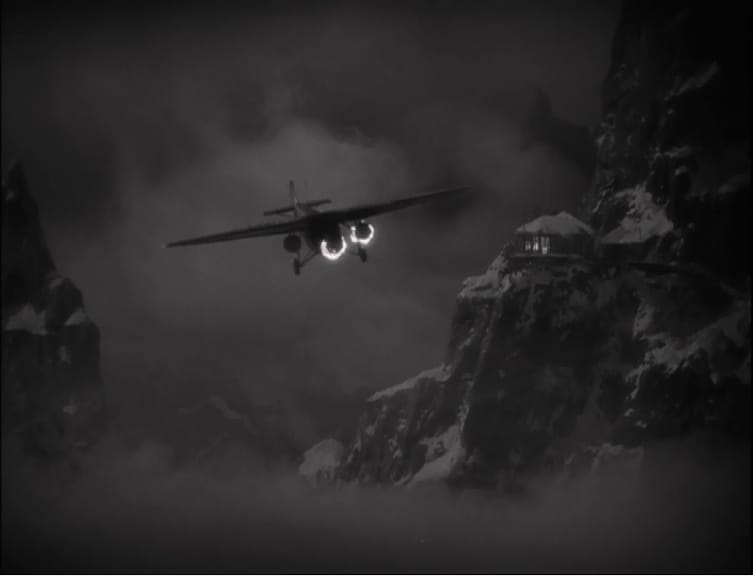 Part of this unique standing has to do with the film’s story, or its lack of one. Based on Anne Wigton’s seven-page synopsis, “Plane Number Four,” which was then fashioned into a five-page treatment by Hawks called “Plane Four from Baranca,” which was itself bolstered by anecdotes from Mexican bush pilots, the film ultimately bears the screenwriting credit of Jules Furthman, who would later write three other movies for Hawks, including Rio Bravo (1959), Furthman’s final work in Hollywood. (Eleanore Griffin and William Rankin provided uncredited work on the Only Angels Have Wings story as well.) Set in a romanticized South American port, the film follows a few days in the lives of a group of airmail aviators led by Geoff Carter (Cary Grant). The picture moves along not so much in a single straight story, but in a series of scenes built largely upon character interaction, a type of structure oftentimes preferred by Hawks over narratives assembled from related, clearly consequential actions. There are certainly some big moments in the film, occurrences that carry significant weight in terms of the film’s plot: the overriding attempt to secure a government contract, Joe’s (Noah Beery Jr.) death early in the movie, the developing romance between Geoff and Bonnie Lee (Jean Arthur), and Kid’s (Thomas Mitchell) devastation at not being able to fly when his eyesight is deemed too poor. But in general, Only Angels Have Wings unravels moment to moment, without one grand story to tell.

See also  Why You Should Start Watching: The Knick

More than anything, the film is a chronicle of the job at hand, and it is around that basic focus that even these aforementioned dramatic benchmarks gain their relevance. A World War I pilot and builder of airplanes, Hawks has a clear admiration and intricate knowledge of these men and their flying machines. Having recently directed another aviation feature, Ceiling Zero (1936), he was particularly attuned to the sounds of an aircraft, a reverberation that throughout Only Angels Have Wings signifies tense transitions of life and death as planes perilously take off or land safely. There is also a perceptive aural emphasis on the systems of aviation, the methodical processes of registering weather conditions, radio checks, relaying messages, and analyzing technical settings. 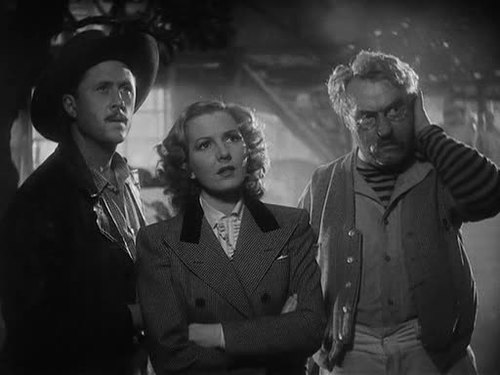 In Only Angels Have Wings, the men are an admirably professional lot (would they be anything else in a Hawks film?). They are good at what they do, and what they do defines them. The community of flyers, like the film, is primarily concerned with competence and camaraderie. Subsequently, when Kid is told he can no longer continue, the news is devastating. This is more than a job; this is his life. To be grounded is to die. At the same time, the job is nerve-wracking for those on land and death-defying for those in the air. When not performing their normal mail courier responsibilities, they are taking on side duties (delivering nitroglycerin into treacherous oil fields, for instance), adding further complications to an already harrowing liability. This enigmatic profession is something singular, something distinct from other lines of work. “It’s like being in love with a buzz saw,” says Bonnie, confounded by the love of the job even with its fundamental hazards. So what’s the appeal? Even the men say they don’t know.

After Joe dies, perhaps the scene where Only Angels Have Wings takes its sharpest dramatic turn and reveals the heartbreaking, horrific severity of the occupation, Geoff is confronted about the death. “That was his job,” says the matter-of-fact supervisor. “He just wasn’t good enough.” Dutchy (Sig Ruman), the resident bartender/restaurateur/shopkeeper/confidant, says Geoff is too hard. Which is true. When asked about the recently departed Joe, Geoff responds with, “Who’s Joe?” a blatant, unfeeling attempt to quickly forget the loss. He can be cold and callous, hardened by a life that has seen more than its fair share of despair. It is his unwavering toughness, however, that enables him to run a tight ship of proficient experts, which is why Joe’s suggested professional ineptitude is the only reasonable explanation for his death. 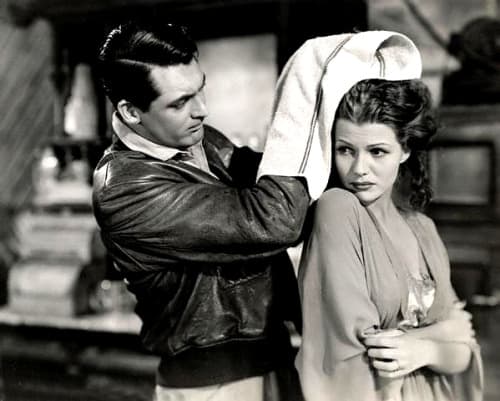 As such, Geoff is not as much fun as other Hawks leads, even if the director argues he is more sensitive than the characters played by Humphrey Bogart or John Wayne. A lot of that has to do with his jaundiced view of life and work, and that, in turn, is based on a seemingly unsympathetic practicality (why bother mourning when there’s nothing to be done), as well as a stubborn reluctance to give in to emotion. Furthermore, Geoff expresses an acerbic remoteness rare for Cary Grant, though he nevertheless excels in the role (by comparison, his one prior collaboration with Hawks, and the three to follow, were much lighter comedies). As odd as Geoff’s sentiments are to Bonnie and to the audience at first, it becomes evident that such is the way of the land and he is not alone in this cynical view of life. These bad things happen, and people carry on. A fatal plane crash occurs literally in their backyard, but within minutes, everyone is eating and drinking as if it were any other night out.

Geoff’s nature does more than illustrate his integrity and his corresponding expectations from others. It also sets up the somewhat antagonistic relationship between he and Bonnie, who is played to perfection by the beaming Arthur. (With more than 31 films to her credit in the 1930s alone, Arthur would only star in another 10 features after Only Angels Have Wings, her final screen appearance being in 1953’s Shane; she died in 1991.) Immediately upon landing for a brief stopover in Barranca (now spelled with two r’s in the film), Bonnie is seen as a spunky breath of fresh air, passing by a bar and joining in a song before she is even through the door. Referred to as a “strong character”—the Hawksian woman in a nutshell—she is initially vexed by Geoff and the others. Then, during a key transitional scene, she gets acclimated through another sing-a-long and begins to understand. In the Hawks tradition, the female outsider has been accepted into the predominantly male group, and when Bonnie greets Geoff one morning with a wave and cheery “hello,” even if he hasn’t fallen in love with her yet, we have. Curiously, though, this type of cordial effervescence was not what Hawks had in mind, and he and Arthur would frequently butt heads over their differing ideas for the character. In any event, the connection between Geoff and Bonnie is not a simple one. She intends to model her relationship with Geoff on his relationship with Kid: no questions, no orders, a mutual trust and understanding. Acknowledging the way she has changed during her short time in the area, Bonnie says, “I don’t know if this is me or another fella,” explicitly stating the gender mutability one commonly sees with Hawks’ women. 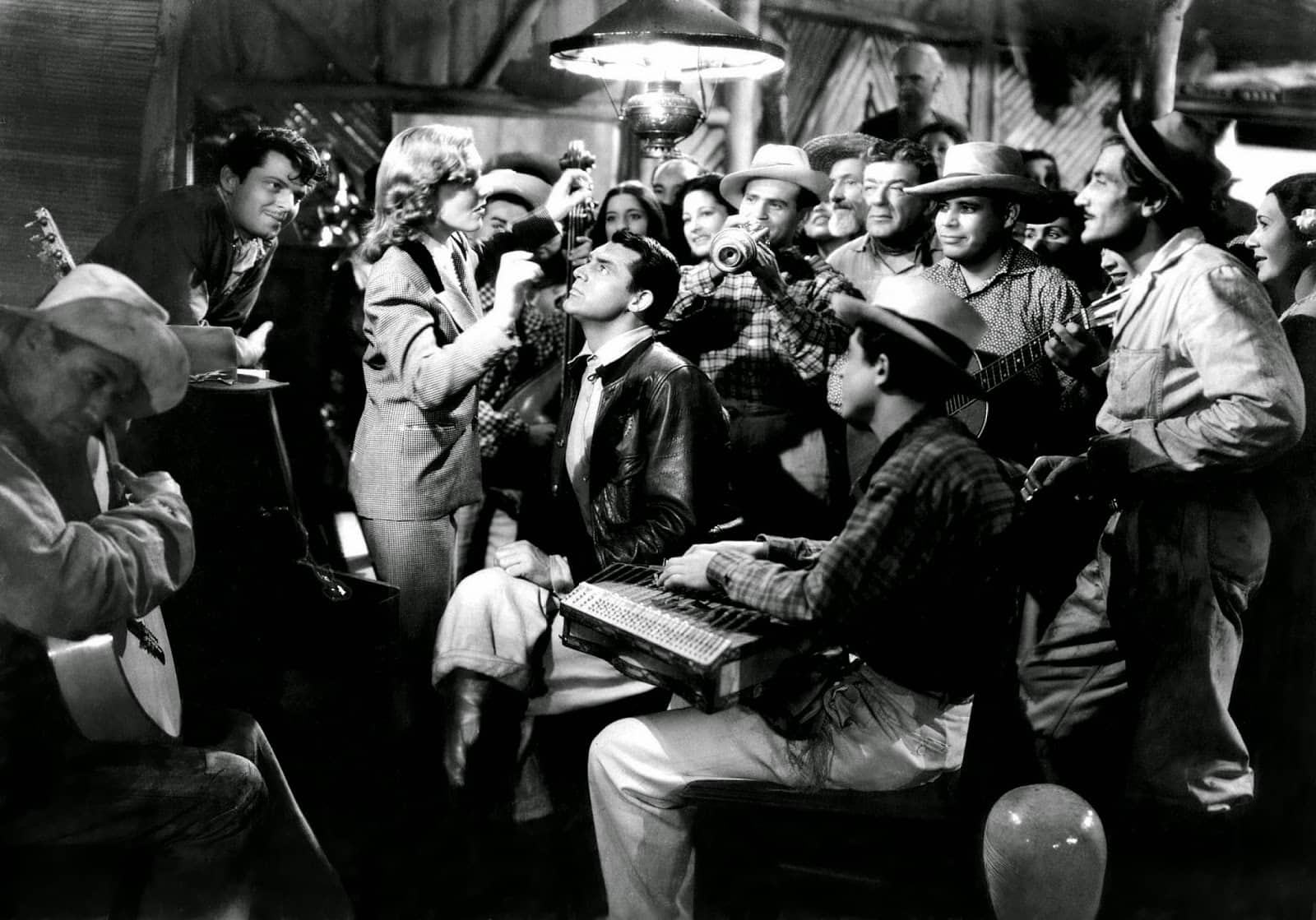 Together, Geoff and Bonnie are the perfect blend of hard and soft features. Geoff is continually surprised by her challenging inquiries and he doesn’t necessarily appreciate it. Yet somehow, as couples so often do with Hawks, they meet in the middle. She probes and provokes and is shocked by his apparent carelessness, but she’s not done with him yet. Grant and Arthur are spectacular together, and while there isn’t the same sort of sexual tension one sees with Bogart and Bacall, nor is there the playfulness of Grant and Hepburn, there is still a quirky, unconventional romance that stems from a chance encounter between two seemingly incongruent individuals. 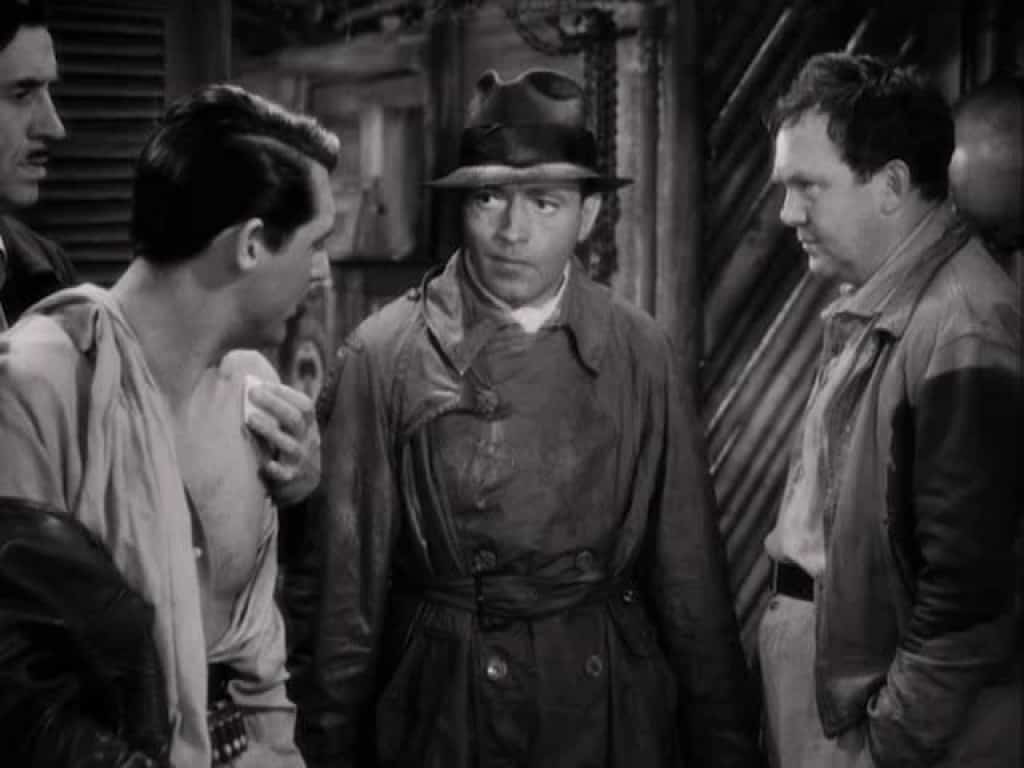 An additional subplot of importance concerns disgraced pilot Bat MacPherson, played by Richard Barthelmess, an actor perhaps still most widely known for his excellent performance as the now decidedly un-PC “Yellow Man” in D.W. Griffith’s Broken Blossoms (1919). MacPherson arrives in town with his wife – and Geoff’s ex -Judy (Rita Hayworth in one of her most prominent early roles). She isn’t aware of MacPherson’s notorious past – that he abandoned a plane leaving his mechanic, and Kid’s younger brother, to die alone- but based on the reactions of others, she knows enough to know there is something lurking in his shady backstory. More important than that, however, as befits another Hawks theme, is that MacPherson is still skilled, which leads to a characteristic second chance that sets up a gratifying redemption. Like Dude (Dean Martin) in Rio Bravo, for example, or Robert Mitchum’s Sheriff Harrah in the very similar El Dorado (1966), Hawks’ men are allowed a slip up, a regression in their stalwart character, as long as they regain their proficiency by film’s end.

Only Angels Have Wings received two Oscar nominations in 1940, one for Joseph Walker’s black and white cinematography and one for the special effects by Roy Davidson and Edwin C. Hahn, the first time such an achievement was recognized by the Academy. Benefiting from both of these technical accomplishments is the film’s extraordinary production design, headed by art director Lionel Banks. There is little to no camera movement in the film, but nearly every shot is active and vivid, with individual compositions teaming with life and ornate atmosphere. Constructed under a tent on the Columbia back-lot, the airfield set is an extraordinarily realized location: inimitable, isolated, exotic, and, as Peter Bogdanovich notes in an interview with Hawks on the recently released Criterion Collection Blu-ray, confined and claustrophobic.

Only Angels Have Wings, or, as the title card actually reads, “— only angels have wings,” suggesting its placement at the end of a sentence, the first part of which is never revealed, is one of Howard Hawks’ finest films, arguably his quintessential work. It is a touching ode to the bravery and passion of a particular group of men, capable men who revel in their chosen profession’s potential for danger; with gun belts leaving pistols at the ready, these pilots are like anarchic cowboys in the South America wilderness. The result of their exploits can be emotionally wrenching (the film includes an absolutely devastating death scene toward the end), but like Bonnie, who marvels as a plane takes off, commenting with awe, “It’s really a flying human being,” we also can’t help but appreciate their devotion to the occupation and to one another. The same could be said for several Hawks movies, but with Only Angels Have Wings, it really is the case that, as critic David Thomson states, “These are places where you just want to be … a team you want to be a part of.”