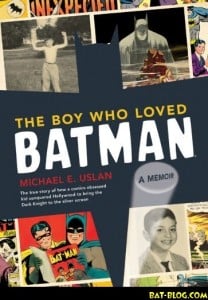 I remember attending a convention a couple of years ago that wasn’t a Comic-Con, but was a lot like it in its celebration of geekdom. There I attended a panel with some of my favorite Star Trek actors. It was one of the best panels I saw as far as entertainment value goes. Say what you will, Star Trek alums know how to handle a convention. It probably comprises half their careers. Still, something happened there that stuck with me.

One of the performers (and I’ll keep his name under wraps to avoid the inevitable backlash from hardcore devotees who might disagree with me) was asked a fairly innocuous question, and he gave a fairly innocuous and humorous answer. “As an actor, what did you appreciate most about your role in Star Trek?” the fan asked. “As an actor,” he answered, “I didn’t appreciate it much at all. As an employee, it meant the world to me.” I laughed along with everybody else, but it struck me later what he had actually said. Don’t get me wrong. He was generous and immensely grateful for his fans. But his role on such a beloved show was just a job to him. He didn’t love the show like we did. From that moment on, I developed a new criterion for judging speakers at convention, and ever since, my favorite panels have always been those lead by speakers who don’t just consider themselves the employees of a geeky franchise but who also identify as fellow geeks.

And that explains the ecstatic reaction I had listening to legendary producer Michael Uslan tell his story about how he became the man behind the Batman franchise. I didn’t know Michael Uslan by name or reputation when I read about the panel he was offering at New York Comic-Con 2012. His name had never registered with me when it zoomed past in the credits of every Batman production since 1989, but from the minute he stepped up to the podium and introduced himself as a “fanboy,” I knew I was going to like him.

Uslan credits comics for teaching him how to read. He started collecting them from a very young age. And when he was 13, he attended the first comic book convention ever held, which took place at the Broadway Central in 1964. Uslan describes it as a fleabag hotel. He and his father had to convince his skeptical mother to let him stay for the weekend after she saw the cockroaches crawling on the walls. On his way through the hotel bar, young Uslan chanced upon Otto Binder, a prolific writer for Marvel comics in those days whom Uslan had interviewed once for a fanzine. Otto then introduced Uslan to the only other patron at the bar, Bill Finger, one of the creators of the character Batman.

Uslan has a hundred stories like this, how he mingled with some of the legends that originated and shaped comics as we know them today. But his personal journey to become a major player in the industry made for the most fascinating and inspirational content of his presentation.

A turning point for Uslan occurred after his disappointed reaction to the premiere of the original Batman TV series. In his words, the show’s interpretation of the Batman character horrified him. He couldn’t imagine people laughing at Batman. He vowed then and there that he would create a real Batman movie with the character’s intrinsic darkness in tact.

Uslan took his first big step in college at the University of Indiana. Back then the college offered its students the opportunity to create a curriculum if they could convince a committee of its academic worth. Uslan pitched the idea of examining comics as an artform. Uslan’s strength as a storyteller and passion for his field really shined as he laid the scene for the first important pitch of his career. Imagine an austere collection of intellectual elites lined up along a mahogany conference table glaring at Uslan, whose love beads, Spider-Man t-shirt, and long hair did little to win their confidence.

Two minutes into his pitch, the dean of the Arts and Sciences department rejected Uslan’s idea out of hand. But backed the courage of his convictions and armed with a clever analogy linking Superman’s origins to the story of Moses, Uslan continued his argument and won his case. His course, the first of its kind to be accredited, made national headlines and Ripley’s Believe It or Not. Stan Lee even heard about him and gave Uslan a phone call to see how he could help. Uslan refers to this as his “burning bush” moment.

Uslan leveraged his newfound notoriety to garner a position at DC Comics. One fateful night, he pitched an impromptu story for The Shadow comic to a colleague and launched a writing career. Not long after that, he achieved a major goal and began writing for the Batman comics. Having fulfilled one dream, he turned his focus back to the vow he made as a 14-year-old boy and started looking for ways to make a Batman movie with the dignity and darkness in the way Bill Finger and Bob Kane had conceived it.

By his count, he sent out 372 resumes in an attempt to break into Hollywood. The only job offers he got out of it were for the mailroom and fetching coffee. So he reluctantly took a different approach and went to law school, taking every entertainment-based law course along the way. As an entertainment lawyer, he worked on renowned productions like Apocalypse Now, Rocky II, and Raging Bull. After gaining enough experience and funds, he started to make the moves to turn his dreams into reality, and against much advice to the contrary, he acquired the film rights to Batman.

It was a long battle of rejections and misunderstandings trying to bring a serious live-action Batman to the screen. Every major studio rejected his concept. Columbia Pictures gave him the most peculiar explanation for their pass. They wouldn’t buy a Batman picture, because their live-action version of Annie had flopped. When Uslan asked what one had to do with the other, he was told they both came from the funny papers. Even Uslan’s mentor, Sol Harrison, the one-time president of DC comics, told him, “Batman is dead as a dodo since the TV series went off the air.”

But Uslan never gave up and finally found his kindred spirit in Tim Burton. Burton shared Uslan’s vision for Batman. Both agreed that only Jack Nicholson should play The Joker, but it took a screening of the movie Clean and Sober and many reassurances from Burton for Uslan to accept Michael Keaton as Batman. In the end, he approved the choice. And in 1989, his wildest dream became a reality, and fans finally had the Batman movie they deserved

Uslan wisely glossed over his discussion of the Batman sequels in his hurry to talk about what he considers the definitive Batman movies. Those are of course the works of Christopher Nolan. Uslan effusively praised Nolan’s vision for Batman, which he describes as the most realistic version of the story. When asked about his favorite film of the franchise, this “fanboy” producer refused to choose between Burton’s Batman and the three Nolan films, which he insists must be interpreted as a single movie.

Just like the realistic portrait of an eccentric vigilante that Nolan created with his films, Uslan’s personal story of struggle and ultimate achievement gives fans something to believe in. One of the major attractions the character of Batman had for Uslan was that Bruce Wayne is a regular guy. He doesn’t have super powers. So Uslan really believed as a kid that if he studied diligently, worked on his muscles, and got the right car he could become the Dark Knight. A lot of people prowling the aisles at New York Comic-Con, dressed in cape and cowl, undoubtedly feel the same. Comic-Con promises opportunities to live out certain fantasies, and Mr. Uslan’s panel presented the ultimate dream-come-true scenario.

Michael Uslan worked hard and realized every last one of his ambitions. Recently, Monmouth University awarded him the first ever doctorate in Comic Book Studies. It’s also significant to keep in mind that he chose a Plan B. Law school was a circuitous way of getting at his goal, but when his 372 resumes were rejected, he never gave up. In almost every way, especially his perseverance and ingenuity, Uslan’s story reflects the origin stories of the superheroes he so admires. Uslan recounts a fuller version of his origin story in his autobiography, The Boy Who Loved Batman, which he plugged shamelessly throughout his talk with a self-promoting gusto he says he learned from Stan Lee.