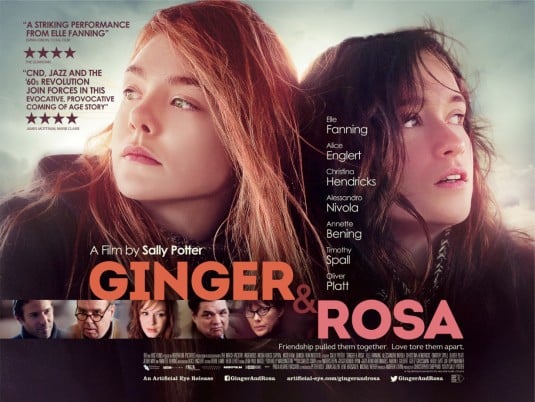 At the onset of the early ‘60s, London teenagers Ginger (Elle Fanning) and Rosa (Alice Englert) are closer to each other than anyone else. Together from birth, they are melded to each other as what is left of childhood quickly passes by. The dangerously exciting atmosphere of social revolution augments their attachment until Ginger’s father Roland (Alessandro Nivola) roguishly intercedes and commandeers everything she cares for. Roland’s sophisticated rebel persona draws immediate comparison to Peter Sarsgaard’s character of An Education– an empty shell of a man who charms girls on the edge of becoming women with the promise of opening their minds and bringing them into a world of their own making. The self empowerment that both men tease is blatantly insincere, a tried and tested deceit that lures in wide-eyed optimism but leaves only heartbreak. Nivola’s Roland is believable as a man who has never learned to act better or more responsibly because he has always gotten what he wants under the guise of living for the moment. Far in the background is Ginger’s mother Natalie (Mad Men’s Christina Hendricks) who warns her daughter against making the same adolescent mistakes which left her pregnant with Roland’s child at 16. The cold distance between mother and daughter makes both of them vulnerable to the continuing selfishness of Roland. Hendricks’ Natalie talks to Ginger with a hint of resentment implied in delivery although not explicit in the lines. If Hendricks conveyed a more subtle tenderness for Ginger than the quiet yet caustic events that Roland brings about could have possessed a more resonating echo at the film’s climax. Instead we are left with an empty relationship with no strong sympathies developed for a mother who doesn’t seem to have much affection for the offspring of her broken life. The frozen, unfulfilled lives of Ginger’s parents contaminate and destroy any illusions that Ginger has about adulthood.

Roland and Rosa take no notice of how absolutely isolated their actions make Ginger. Profoundly stirring is Ginger’s increasingly outspoken paranoia about the likelihood of a nuclear war erupting. Her thoughts about it become frantic, vivid and fearfully focused on it’s imminence as she is left alone to contemplate how terribly humanity can behave. She has no one to confide in or comfort her feelings of inadequacy and impermanence. The two strongest bonds in her life are immediately broken as they cut her off and focus on themselves. For Ginger, the secrets of others pile up and threaten to crush her. The transference of the torment her father has brought into her life onto the nuclear crisis is moving and telling of how much Ginger continues to care for others even though they hardly give her a second thought. For as much passionate depth as Ginger has, the other characters swirl around her with a measured hollowness that is the root of why the story languishes until Ginger is finally allowed to let loose with all her buried suffering.

In Potter’s most skillfully accomplished scene, all is divulged and what emotions have been muted are finally turned up to full volume. Ginger’s long stifled sobs pour forth from deep trauma, an ache that can’t be reversed. Fanning is strikingly luminous as an idealist damaged by the abandonment of others. Her wounds take a while for anyone to notice, so much of the film is spent watching them fester until the almost tangible pain has almost done her in. Prodded into the truth behind the fervor of her political protests, she palpably burns with suppression and then vents with a careful fury. Just 13 at the time of filming, Fanning impresses as an accomplished actress able to convincingly convey the burden of an adult’s conscience while interjecting the neediness of a little girl who simply just wants the love of her parents.

Ginger’s introspection halts the progress of the film when overly reticent and jettisons hope for cathartic confrontation when fiery. Ginger & Rosa thrives when it turns away from passive victimhood, stagnating underdeveloped characters and when Fanning’s volatile melancholy threatens to brings us close to the full extent of her misery. A misery that only comes to the surface for moments which are as entrancing as they are brief. 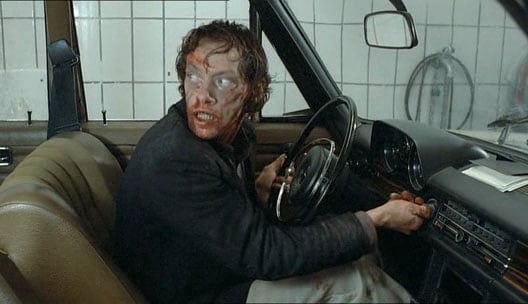 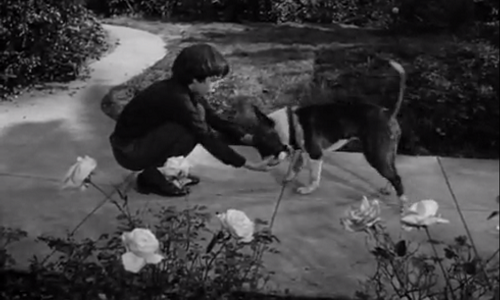