If the idea of racing obsessed aliens taking over the Earth and transforming it into a giant racing track sounds a tad bizarre, you can be sure of two things: firstly, you’ve never played Diddy Kong Racing, and secondly, you are well overdue for a couch co-op gaming session. Enter Obliteracers (formerly Space Dust Racers), the maiden intergalactic voyage from Melbourne based Space Dust Studios. Part brawl, part Crash Team Racing and completely entertaining, Obliteracers is not just a highly competitive romp around some of the finest futuristic race tracks you’ll lay your eyes upon, but the definitive multiplayer cartoon racer we’ve been yearning for.

Just a brief glance at the history of kart racing games reveals how far the genre has come since its 2D roots. Following the wildly successful Super Mario Kart, a gradual shift began to emerge in both kart racing mechanics and aesthetics, perhaps most notably the transition to streamlined 3D graphics. And even with the Mario Kart series largely dominating the market, games like Sonic & All Stars Racing Transformed and LittleBigPlanet Karting still made their mark, suggesting that players were thirsty for something new and unknown. Something out of this world. 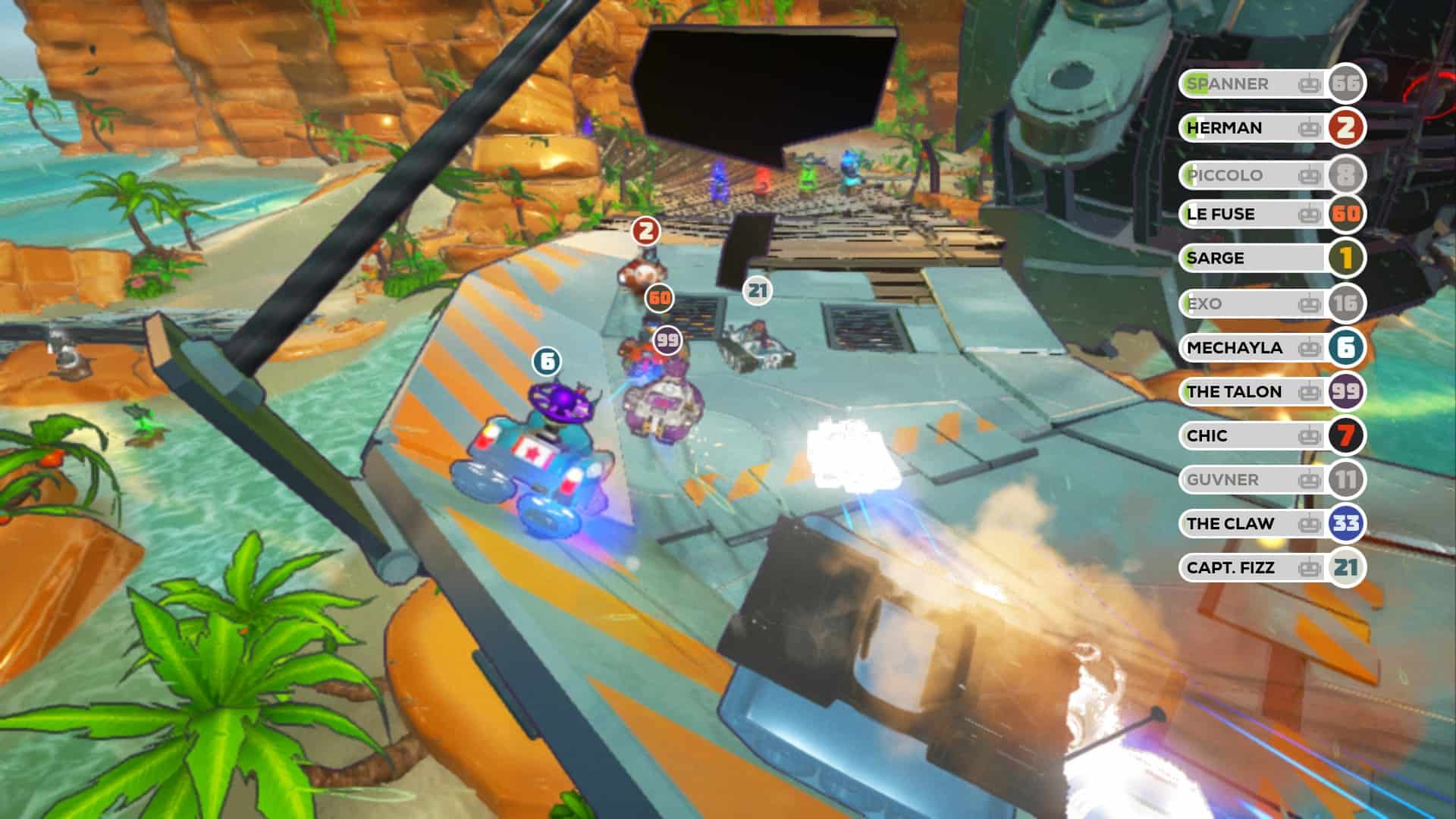 Set in the not too distant future of 3015 AD, Obliteracers rises from the ashes of the classics to take its place in go-karting history. As the camera pans in and out across beautiful vistas, brutal-cute aliens start their engines, and a familiar feeling of excitement sweeps through you. The crash course tutorial feeds you the basic controls before the lights turn green, but the greatest teacher is of course the racing itself. Something that becomes immediately apparent at this point is that Obliteracers is not a strict grand prix style experience, requiring players to complete three laps of a circuit. There is no timer ticking away in the background either. Instead, we are offered a new style of racing which emphasizes a special brand of hilarious, explosive mayhem that is split into career and versus options. Career comes loaded with several modes like knockout mode, where the objective is to score points by eliminating every other player in sight and coming first is the least of your worries. Throughout the course there are weapon powerups that you can use to strike your opponents with much like the stars and turtle shells in Mario Kart 64, but this time you have air grenades, fire exhausts, proximity mines and electric halos to unleash-the perfect recipe for utter pandemonium. Leader mode is by far the closest thing to purist racing, since it awards points to the player who stays at the front of the pack for the longest, but still avoids the traditional lap structure. Maintaining the lead is made more complex by all the other competing racers (which can go up to 15) who won’t hesitate to blast you to smithereens or ram against your vehicle so it goes spiraling off a nearby cliff. It’s a dog-eat-dog world. Fortunately, you have a shield which can not only deflect opponents’ attacks and environmental hazards like bombs, but also heal your racer if you drive through weapon powerups while it’s activated. It’s an incredibly fair system, with the only catch being that using your shield automatically dispels any stored powerup weapon. Endurance mode raises the bar by allowing knocked out racers to constantly respawn and continue the carnage, while survival mode offers some respite in that knocked out racers cannot respawn, resulting in a slower paced match overall. The Micro Machines influence is clearly tangible, Obliteracers’ battle heavy style gameplay feels so wonderfully fresh. 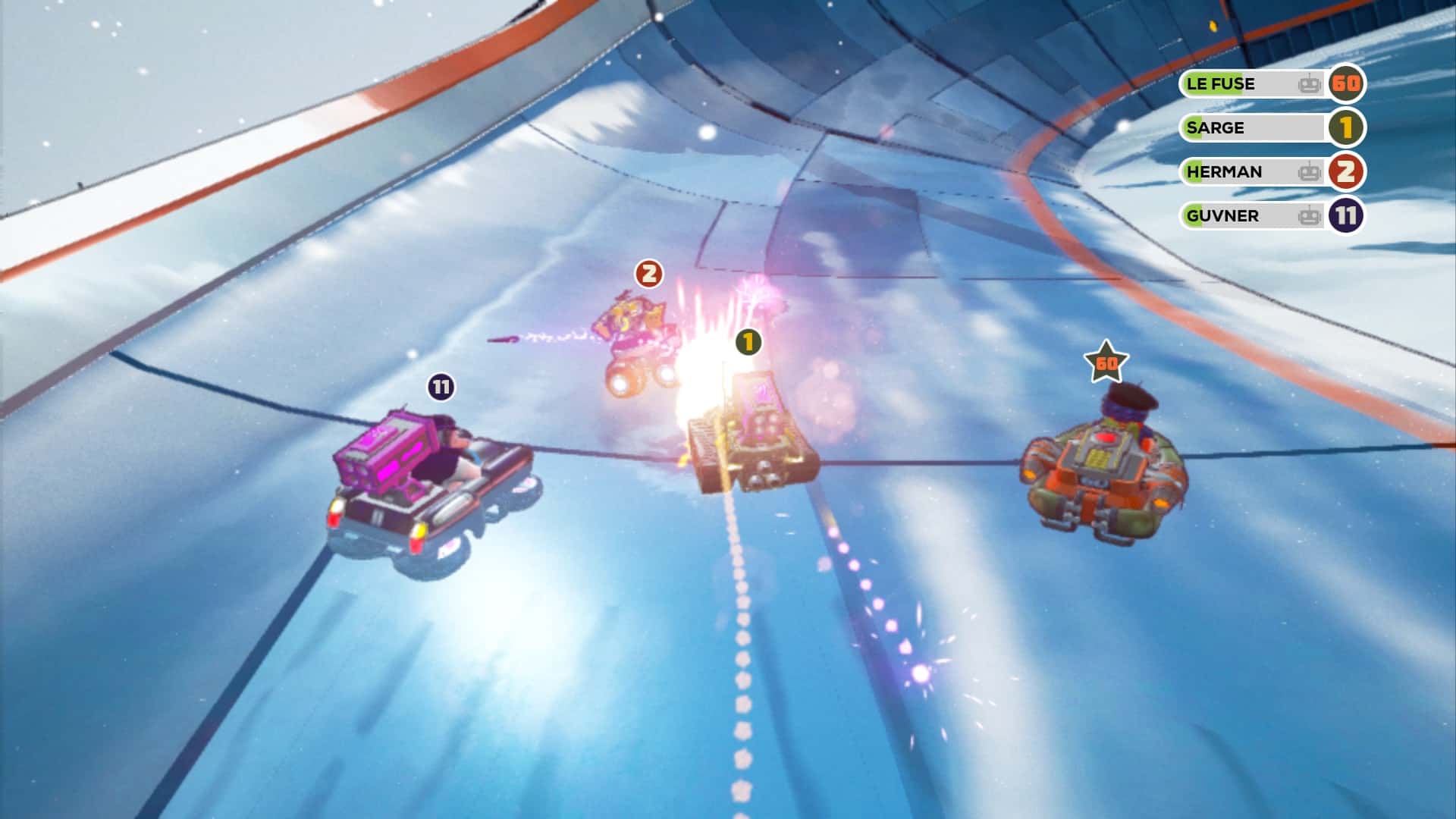 Another facet of Obliteracers that deserves high praise is the intelligent and flexible gameplay design, which lets players maneuver their character using the keyboard, controller or gamepad, and even their own smartphones. The keyboard offers precise movement typical of PC gaming, but for the classic feel of a console, you can’t go past a gamepad (I used an Xbox 360 controller). Movement is slightly more slippery compared to something like Mario Kart 7. It does take some getting used to and at times makes it rather easy to fall off the track very quickly-the learning curve is moderately high and that can translate to frustration. However, it is that same quality that makes Obliteracers a risk and reward centered game that is so much fun to play, on your own or in a team. The intersection of mobile and PC gaming meet through the smartphone, which by an incredible feat of technology, also functions as a controller with the only proviso that it’s much more difficult to operate than the other two methods at first. The intelligent gameplay design also extends to players who are knocked out for the round, and are given another chance to fire from the grave via a targeting system that locks down on a racer and fires bombs from above. It’s a highly inclusive mechanic that boosts the game’s enjoyment and shelf life for both career and versus options. And while any decent racing game demands a certain amount of concentration on steering the wheel, it’s difficult to ignore the sizzling landscapes that simply burst with life and colour, or the haphazard way in which strangely named cartoonish drivers storm down the racetracks. 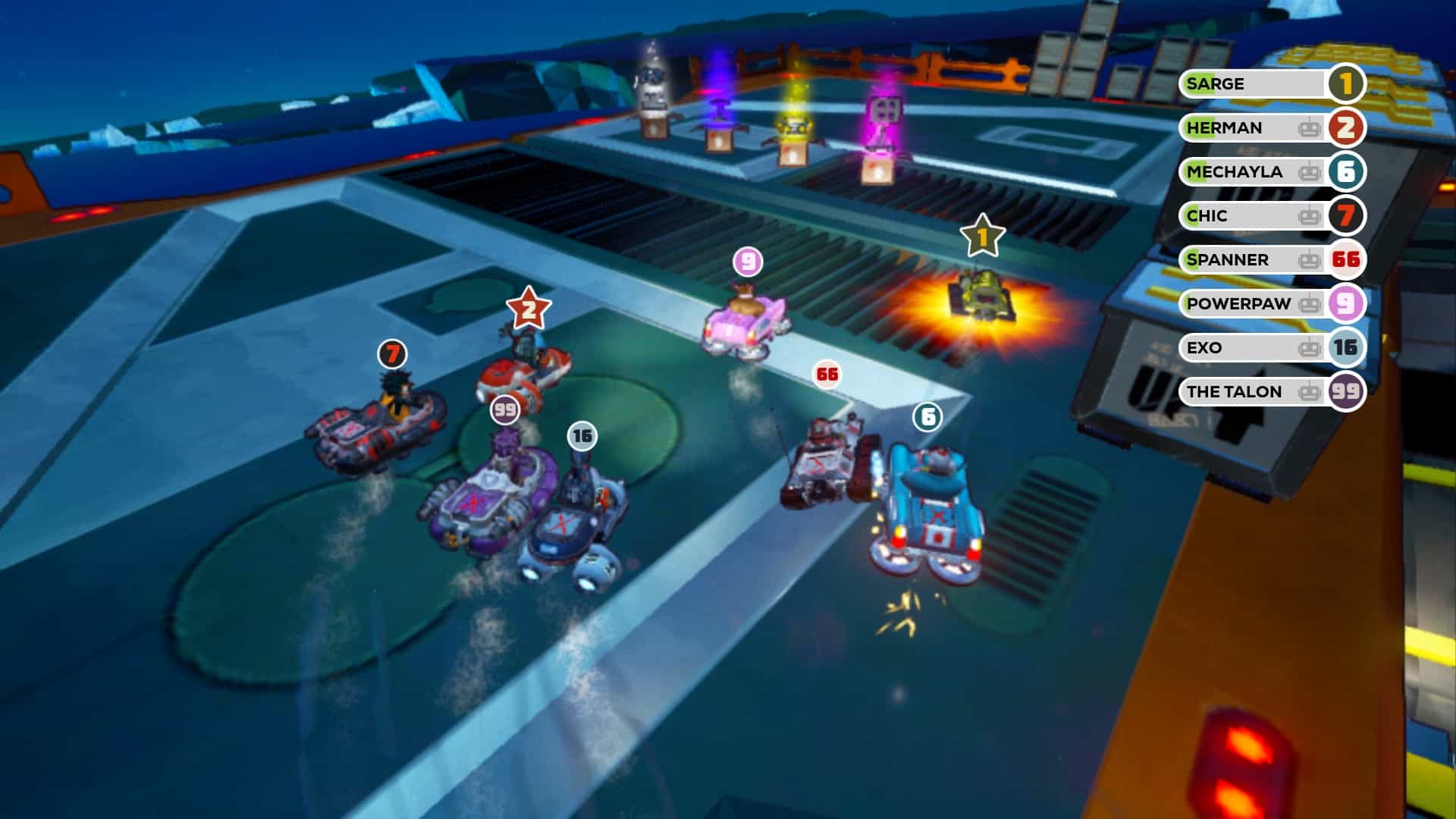 The quirky characters – which range from cyborg hermit crabs to guerrilla warfare birds – have a truly distinct personality about them. They like to randomly shout hilarious gibberish throughout the race and are testament to fantastic and solid character design. My only critique is that they don’t have individualised weapons in addition to the generic set, which could potentially make each character stand out more and add another layer of excitement to gameplay. Obliteracers‘ soundtrack, which is modelled on the Cantina theme from Star Wars, will appeal to fans of jazz and electro swing and feels like a funky circus troupe that’s randomly waltzed into a train and started performing with gusto, I exaggerate not. Compared to the original electro-rock style music, the Cantina perfectly encapsulates the feeling of ‘comic mischief’ that we see in many a Nintendo trailer, and suits the game’s brilliantly bizarre world as a whole. Obliteracers is one of the most innovative, wackiest kart racers to break through the market in recent years. Not only is it a complete treat for couch co-op sessions with family and friends, it may just result in you permanently borrowing the computer for yourself. 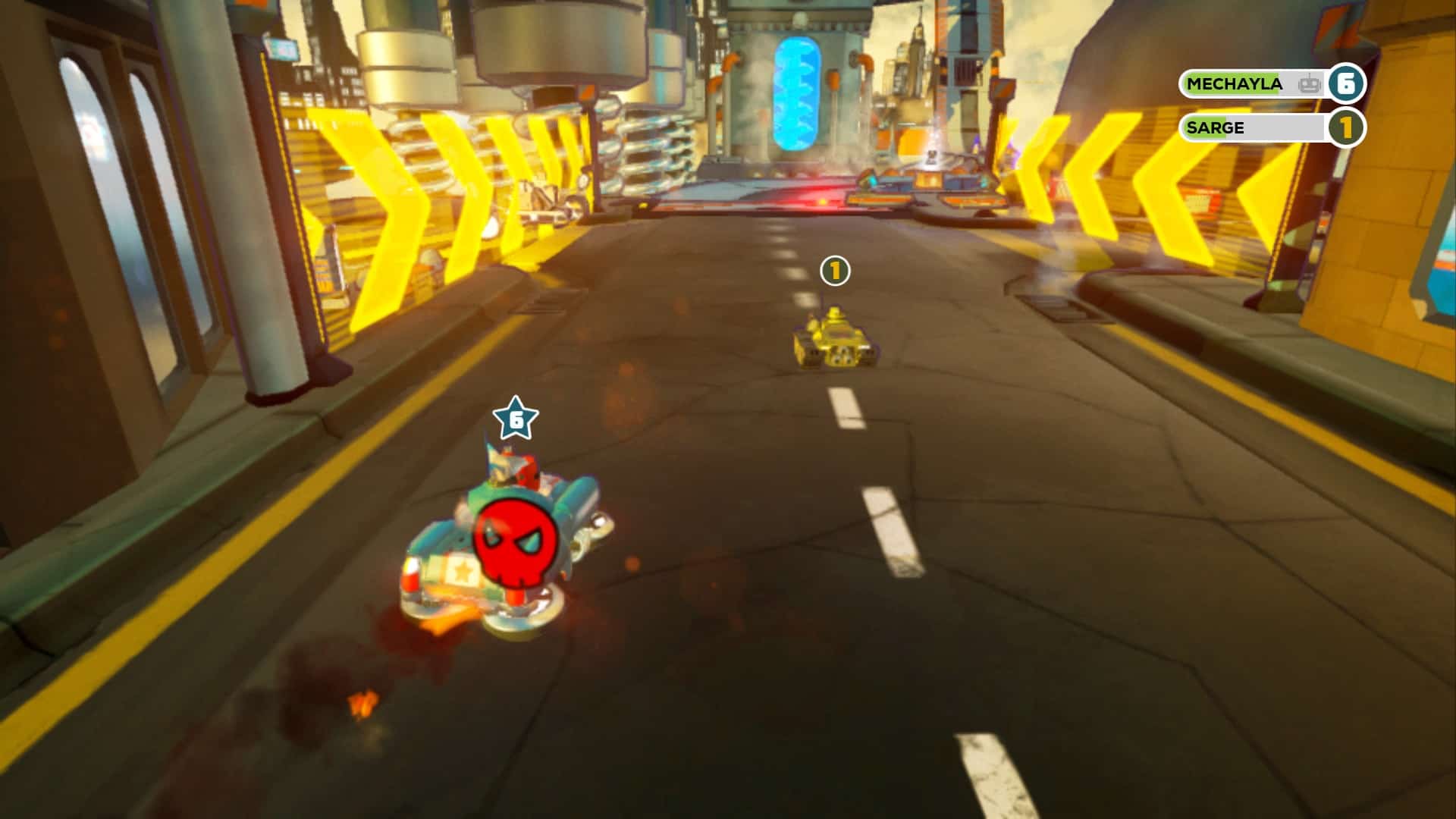 Obliteracers is currently on Steam for $13.49 USD and is also expected to release on Xbox One and PlayStation 4 in 2016. You can follow Obliteracers on Twitter for the latest game news and developments.