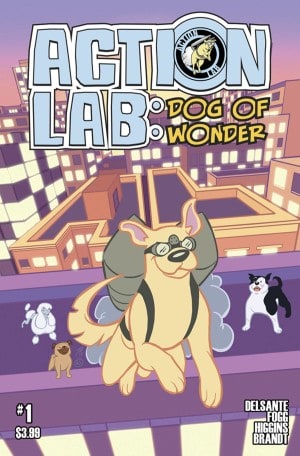 With bright, clean art from Rosy Higgins and Ted Brandt (Raven Pirate Princess), and a fun, fast moving script from Scott Fogg and Vito Delsante, Action Lab: Dog Wonder #1 acts a primer to the superhero genre for young readers while also acting as a pleasing diversion for even the most jaded comic book fans. It’s also a great callback to the days when a talking animal could front his or her own comic or at the very least be a major supporting player, such as the beloved Legion of Super-Pets, who appeared in Silver Age issues of the Superman titles and Legion of the Superheroes.

Action Lab (who is the mascot for the company that publishes the comic) has the gadgets and swagger of Batman without his parental issues and chronic brooding syndrome, and he is a true masked vigilante, who works outside the law, rescuing shelter dogs and finding homes for them before they have to be put down. His mission is like the ASPCA, but without the depressing, guilt inducing commercials and questionable use of funds and with more grinning and chase sequences. However, Action Lab #1 isn’t all easy breezy dogs doing cute things, but truly has a dark beginning as an innocent puppy named Lucky (Not Hawkguy’s dog unfortunately.), who is the runt of the litter becomes part of a dog fighting ring. To keep the book all ages, the comic relies on Higgins’ color palette of dark orange and greys compared to the rest of the book’s picket fence, suburban look along with just enough shadow to show how scared Lucky is. Poor guy! This opening sequence creates a lot of sympathy for Action Lab and his mission as he wants all dogs to have a good home, not just the cute, non-mutt-looking ones. Fogg and Delsante capture his good heart in one perfect, yet heartbreaking line of dialogue, “You are not defined by your scars”. Yes, there is more hope in one line of dialogue from an indie comic about a dog with a jetpack than many superhero comics currently on the stands.

See also  You're in the Minority: Top 10 Oscar-Winning Actresses of Color

Ted Brandt and Rosy Higgins’ art in Action Lab #1 is less complex than their work on Raven Pirate Princess, but 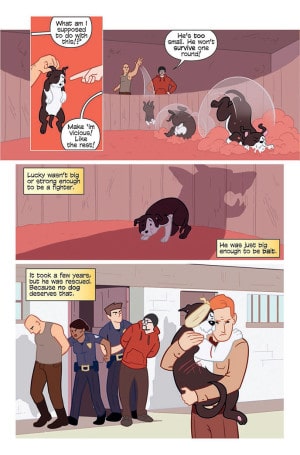 it fits the story as the dog characters have inviting faces that makes you want to rub them behind the ears from the dogs at the rescue shelter to Action Lab (Cats don’t fare as well, and there is a great in-joke about another Action Lab property that like ten people will get, but it’s quite clever.) There’s also a fun chase sequence, involving Action Lab’s unique “abilities” packed with some canine-related humor, pitfalls, and some great smirks from the hero himself. It’s nicely choreographed and pleasant to follow as well.

Action Lab: Dog of Wonder #1 is the feel good comic of the month. Read it to your younger sibling, your dog, or just read it yourself and find a ray of hope in the smile of Action Lab himself and his selfless pursuit of helping dogs, who have been neglected by their owners even if it goes against the letter of the law. And even if the comic looks like a straightforward superhero story with dogs instead of people, Vito Delsante and Scott Fogg add some shades of grey in the characters of Action Lab’s antagonist (for now), Clancy Jackson, who comes across as a jerk, but really cares about the dogs of Canaan City.