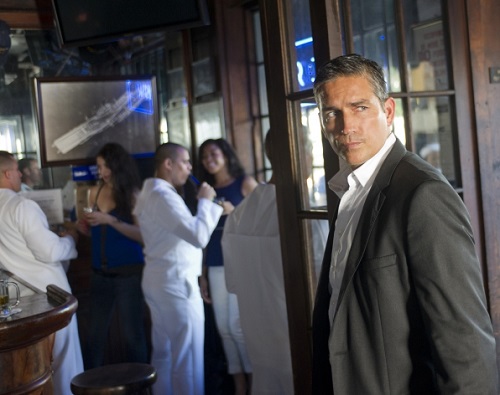 A brief recap on the first two seasons: there exists a machine made my the government that monitors the activities of everyone in the country (and abroad) for the purpose of predicting and preventing terrorist attacks. As a byproduct, “The Machine” also tracks the more mundane activities, i.e. premeditated murders. “The Machine” gives out a person’s number who will either be murdered or will be murdering someone else. Using “The Machine” to prevent these murders, former CIA operative John Reese (Jim Caviezel) and Harold Finch (Lost‘s Harold Finch), creator of “The Machine”, work to prevent these murders with the assistance of New York City Detectives Carter (Tarji P. Henson) and Fusco (Kevin Chapman).

“Liberty” picks up where Season 2’s “God mode” left off with “The Machine” having been “freed” but still delivering numbers, burned CIA operative Samantha Shaw (Fairly Legal‘s Sarah Shahi) is working with Finch and Reese sorting out the numbers in a slightly less subtle way than they’d prefer, Root (Cabin in the Woods’ Amy Acker) has been placed in a mental institution by Finch and continues to have an odd connection with “The Machine”, and Carter has been demoted to a police officer after preventing nefarious corrupt cop organization HR from killing crime kingpin Elias (Enrico Colantoni). In a week where New York is being bombarded by a flood of Navy Seals, the newest number is a Seal ( whose tracking conveniently requires Reese use his full roster of assets. 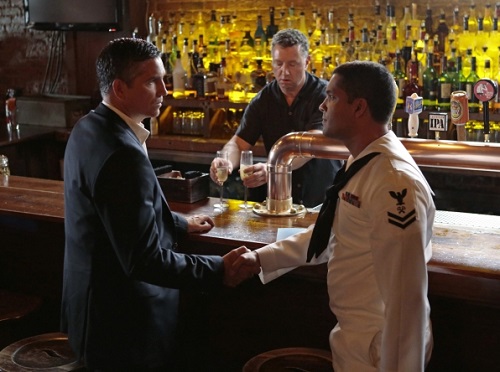 Person of Interest has never been a spectacular show. Every once in a while it would reach the point of compelling character drama, but these are largely far and in between. As is usually the case with this show, “Liberty” is an underwhelming episode that doesn’t bother to actually engage with the viewer. Anything interesting or substantial that does occur is almost by way of accident and even then is at the point of being subtextual. It’s a functional procedural and tries for little more than that. Little to no insight into the characters is given. The only intriguing moments of the premiere are scenes involving Root and her fascinating craziness, now coupled with the ear of “The Machine” One truly captivating moment (and it seems to almost be a happy accident) is when Root’s therapist is mentioning the recent revelations in the news that the NSA have been monitoring people for years, a revelation made even more disturbing in the context of “The Machine”. Sometimes art imitates life and this is a little too close for comfort. “The Machine” has always been a particularly creepy exposition device, but this pushes it over the edge into being downright uncomfortable. Another great moment was a quiet interaction between Carter and Elias, a chance for the audience to reflect on how far Carter has been forced to compromise her own sense of right and wrong since meeting Reese and Finch. Her own morality says that Elias should by all means be in prison, but that option is made particularly impossible by the involvement of HR and Elias’ deadly rivals, the Russians. Carter’s own morals forces her to choose between having Elias alive or having him in prison. She can’t have both and as a result has to pick the lesser of two evils.

Over the last two seasons, Reese and Finch have established a natural chemistry and it continues to be interesting how these two intensely private individuals attempt to learn more and more about the other, often times to no avail. Caviezel and Emerson make these interactions entirely organic and completely natural. Even if it’s not with each other, their dealings with other characters, such as Fusco, Carter, or Shaw, are always sparking with electricity, which is amazing on Caviezel’s monotone part. Speaking of Shaw, Shahi is a great addition and looks to liven things up a bit with her sociopathic love of violence. Shaw is a fun character to have around and Shahi does so much with her. It’ll be interesting going forward to see what directions the show goes with her character. Hanson and Chapman also have an interesting chemistry together being former partners and Chapman is enjoyable as a lovable oaf that continuously gets dragged into impossible situations by Reese. Carter might be the only truly captivating character on the show and Hanson plays her tough, straight edged, yet more and more of a dual personality. Amy Acker is nothing short of fascinating as everyone’s favorite psychopath Root. An intensity exists behind Root’s eyes that is solely Acker.

“Liberty” is a rough start for Person of Interest, but fans can only hope that it’ll rise from its procedural roots into something more.