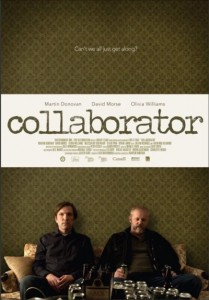 What is it about those hard to define films that can earn the admiration of movie goers everywhere or get completely lost in the endless sea of small, medium and big budget releases? Some movies are simply beyond categorization, no matter how hard those stubborn about plastering labels on films are. Is so and so film a comedy, a drama, a dramedy? Hold on a moment, for there are elements of suspense as well, not to mention a couple of out of place action scenes. Without the shadow of a doubt many readers can instantly point to a number of films which, for lack of a proper term, simply ‘are what they are.’ This may be to a movie’s benefit or detriment, for the unclassifiable film may venture too far off into a vast array of tones, thus preventing it from hitting enough chords with enough viewers. Martin Donovan, who has definitely acted in a wide host of films, brings what he has learned on those sets to the director’s chair for the first time with Collaborator.

Donovan’s directorial debut takes to the long way around to get to where the main thrust is of the plot is situated. The director wrote and stars in the picture as Robert Longfellow, a once highly touted playwright who has fallen on some hard times with audiences on critics in New York, arguably the holy grail of American and possibly world theatre, where careers can be made just as they can be broken. With his latest play lambasted by the press, Robert opts for some time away from the Big Apple, where he lives with his wife (Melissa Auf de Maur) and young children. He flies across the country to California where his mother (Katherine Helmond) still lives in the old family home. Mother is still a lively personality, although one of her curious traits, due in part to her ageing, is confusing Robert for his slightly older brother who met his demise while battling in the jungles of Vietnam, a war Robert, a vocal left-wing minded individual, has been known to criticize. Among other things which have not changed in his childhood stomping grounds are the front door neighbours, especially Gus (David Morse), who, in his early fifties, still lives with his own mother. Gus is a frequent prison inmate, formerly found guilty of murder, among other unsavoury acts. Nevertheless, his demeanour when noticing Robert is back for a visit is mostly jovial, practically insisting that the two old chums share beers one evening. On the same evening Robert planned to visit an old lover, actress Emma Stiles (Olivia Williams), Gus not only invites himself into the home for beers…but takes Robert hostage as the police stake outside! ‘In more ways than one, Collaborator is all over the map, both in terms of plotting and tone.’

The above plot synopsis is dense, something that should be avoided when writing for sites with large readership, so as to not reveal too much of the plot and story. There are, alas, exceptions to said rule of thumb, Collaborator being a clear one. Why so much given away for the simple task of setting up the current article? Because Martin Donovan, unquestionably a respected artist on the American independent film scene, demonstrates both his strengths and weaknesses in his debut behind the camera, wanting to tell a whole lot of story, not all of which ever fully pays off in meaningful ways. In more ways than one, Collaborator is all over the map, both in terms of plotting and tone. Oftentimes, such a comment is intended squarely as overtly negative criticism. Not so in this case, and yet at the same time this desire to cover an extremely wide canvas of emotions and tones drags the film away from its full potential.

For beginners, the eventual hostage takeover executed by Gus on the unsuspecting Robert occurs very deep into the film’s running time, so much so that it is a little difficult to claim Collaborator as a ‘hostage film’, for so much plot, not all of which even comes in to play during the crisis, is delivered prior to the eventful evening. There is the professional hardship experienced by the protagonist at his latest play is eviscerated by critics, his cute if increasingly difficult relationship with his mother, the deteriorating relationship with his wife, catching with the Gus (pre-hostage sequence) and then his visit to actress Emma Stiles, played with terrific class and a side serving of enigmatic emotions by Olivia Williams. Writer-director-actor Martin Donovan appears to want to invite viewers to experience a full on character study, from normalcy in his life, trials and tribulations notwithstanding, to suddenly exploring how this individual would react under circumstances of extreme duress and tension. Here is a character’s life, here is who is he as a person… now watch how he adapts, if at all, to a terrifying personal misadventure. On paper, the idea is compelling, and had the tone been more focused, had the emotional weight of the side plots been handled with greater delicacy, then Collaborator could have ended up as a neat little thriller or psychological drama. As it stands, the movie is at times a story about infidelity, at times about family drama, at times about theatre, at times a comedy and for a while a hostage movie, which itself is at times played for laughs and other times with dead seriousness. Whereas an experienced director might have juggled all of these with greater skill (perhaps even foregoing a few entirely, thus making the story more lean), Martin Donovan apparently wants all of these to be very, very important to the overall plot, hence a lot of time is spent on each. Collaborator is episodic in nature, but not in the best sense of the term because it is uncertain whether or not the director even intended it to feel so episodic in the first place. ‘The greatest irony is that, by the film’s end, it is difficult to call Donovan’s film outright bad.There is obviously some quality here.’

Also hurting the picture, at least occasionally, is how overly written some critical scenes are. Once the hostage sequence commences, the audience is unsure if Gus is willing to actually dispatch Robert if the going gets tough. They are, after all, old pals. This leads to some genuinely funny scenes wherein the kidnapper and victim reminisce about certain people they knew when growing up, on top of the fact that they are smoking weed and pounding down a few beers. Some viewers may find the attempts at comedy somewhat misplaced, but this does give this portion of the story a degree of charm. At one point Gus, evidently in inebriated sate, grows curious about Robert’s profession, that is, writing plays and theater in general, which encourages the two to improvise some scenes together, but the more they improvise, the more the scenes are supposed to speak about who each character is as an individual, what they believe in and where they may have fallen off the tracks in certain respects. It is clumsily directed and, surprisingly, clumsily written, just another example of the film trying a few things too many. Arguably the most frustrating part of the viewing experience is hoping to understand what the film wants to say. What is the main idea, or some of the main ideas? What does Collaborator want its audience to take away from the experience?

The greatest irony is that, by the film’s end, it is difficult to call Donovan’s film outright bad. There is obviously some quality here. The cast is really good, standouts being Donovan himself, Katherine Helmond as his mother and of course David Morse as the troubled Gus, and there are more than a handful of solid scenes, be they comedic or dramatic in tone. It is the equivalent of arguing ‘Scene A is good, scene B is good, as are scenes F, O and R, but the film as a whole is kind of a mess.’ Is the inconclusive verdict somehow Donovan’s intention in the sense that he hopes to lead the viewer astray or is Collaborator really, really, a mess? Probably the movie’s most clever decision is to end the film abruptly. Done. Finished. Story exhausted. No more to say. Like this review.