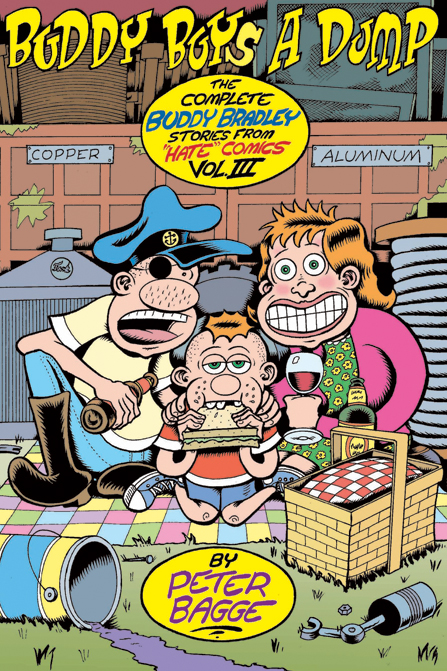 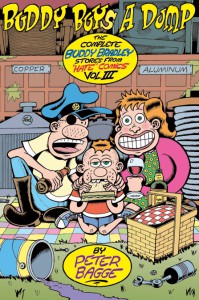 So Buddy buys a dump, eh? What else would you expect from an all-grown-up slacker like Buddy Bradley? You didn’t think he was ever going to get a real job, did you? Best case scenario, he might have been coaxed (read: nagged) by his wife Lisa into taking a few classes at DeVry or ITT, but that would have required a serious tweaking of the man’s worldview. Buddy Buys a Dump is the latest collection (the first in seven years!) of the complete Buddy Bradley stories that were compiled in issues 1-9 of Hate Annual published from 2001 to 2011. This collection also features a new, previously unpublished tale of Bradley family woe.

I must admit, I had lost track of Buddy and Hate in recent years and could only assume that Mr. Bagge was still cranking away at his drawing table, devising new ways to make Buddy suffer. (He has in fact been cranking away doing work for DC, Marvel and writing for Reason magazine). My own history with the Hate series goes back to about ’92 or ’93 when, after spacing off my el stop on my way home from the Loop in Chicago, I ended up at a shop called Haley’s Comics located underneath the Paulina Street el station. Having never cared much for comics of the superhero variety, I went in nevertheless and the very different style of the Alternative Comics section, and Hate comics in particular, caught my eye immediately. The series was already up to about eight or nine issues at that point, so I bought every one and was soon a devotee, eventually even sporting an “I scream, you scream, we all scream for heroin!” t-shirt—a drug I would otherwise not endorse in this fashion.

I’ve grown up and so has Buddy. Buddy’s life paralleled my own in some sense (crap jobs, weirdo roommates), but essentially I am not, nor will I ever be like Buddy Bradley. I certainly know the type, however, and therein lies the appeal of Buddy as a main character. The revolving cast of nut jobs that Buddy attracts to himself, and is attracted by, doesn’t hurt the appeal or comic potential either, nor does the sharp wit, great dialogue and Bagge’s unique style of rubbery, quavering limbs, popping eyes and massive pie holes shouting and swearing off the pages. Bagge developed this unique style many decades ago and he hasn’t toned it down much since his days drawing characters like Studs Kirby, Girly-Girl and Zoove Groover. Those squiggly lines of anger shooting from brows and spit firing off from teeth-bared mouths are his trademark.

There are eleven chapters in the continuing Bradley saga contained here. They involve the buying of a dump, of course, Buddy 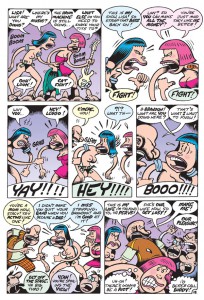 eventually going into business with Jay (again), the raising of Buddy and Lisa’s baby, Harold, with appearances by Buddy’s wing-nut brother, Butch, and other assorted neighborhood ne’er-do-wells. Even Buddy’s old high school chum Stinky makes a cameo. (Spoiler alert: he’s still a corpse.) Our hero does seem to have mellowed a bit with age. He doesn’t fly into a rage as easily as his younger self, Lisa seems to have a slightly firmer grip on him and although he does have his shocked and awed moments of disbelief (complete with the bulging eyes, gaping mouth and wavering lines of exclamation), life has kicked some of the old fight out of Buddy, but that was just the fight to be lazy and shiftless so that’s not such a bad thing. The new and final story, “Fuck It” created in 2013, sees the Hate storyline come full-circle as Buddy returns to Seattle, with kid in tow, on his way to meet Lisa who has been minding her sickly and aging family’s affairs. Who knows what new life and old characters await them there.

2015 will mark the 25th Anniversary of Hate and the Bradley family was introduced to the world at least five years before that in Bagge’s first series Neat Stuff. We’ve seen moves before, and deaths and breakups and births and we can only hope that Bagge has the time and inclination to keep humoring us aging Gen Xers by giving us a new taste of Hate every a year.