I’m not sure you’ll find a story more tailored to geek-kind than this. Today, a group of physicists at CERN, the European Organization for Nuclear Research, have released online for free, a feature length zombie movie they filmed at the Large Hadron Collider in Geneva Switzerland. Decay, a micro-budget horror film set among the underground tunnels of the Collider, has the advantage of being filmed in one of the coolest practical locations on earth. Micro-budget zombie movies nowadays are a dime a dozen (I should know, I made one too), but Decay has the intriguing promise of being written and directed by actual physicists who work at CERN. Unfortunately, the cast is also comprised of physicists, which could yield bad results.

The Large Hadron Collider (LHC) is the largest and highest energy particle accelerator on earth. Set in seventeen miles of underground tunnels over five-hundred feet below the Franco-Swiss border, the Collider is a Bond like super-lab of unmatched scope. The science of it all is truly beyond me, but the LHC exists to test the boundaries of particle and super-energy physics and answer questions about everything from antimatter to quantum chromodynamics. Scary sounding stuff. So scary in fact, that the creation of the LHC led to actual public fears of a doomsday event involving the creation of unstable micro-blackholes. It probably didn’t help matters that Dan Brown’s uber-popular novel “Angels & Demons,” the sequel to “The Da Vinci Code,” revolved around a plot where antimatter weapons created at the LHC were used against the Vatican. Ron Howard’s film version of Brown’s book actually filmed on location at the Collider.

Decay bases its cause for the zombie outbreak on the discovery of the Higgs boson; the “God particle.” The discovery of the Higgs boson is one of the reasons the Large Hadron Collider was conceived to begin with. This particle, which could help unravel the mysteries of the universe, earth’s composition and the Big Bang Theory is believed to have been detected this year. Its discovery, if proven, could have implications across boundaries both scientific and religious. 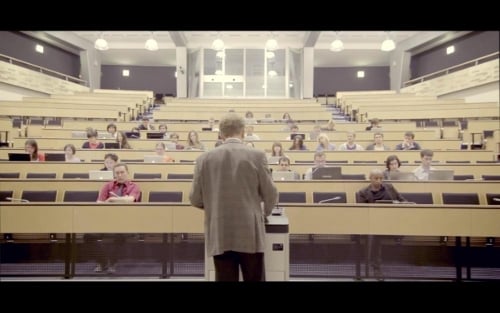 In a press release for Decay, it’s explained that the Higgs boson is discovered, causing a disastrous malfunction in the maintenance tunnels below CERN. A maintenance team is somehow turned into zombie like creatures that hunt a group of physics students also working in the facility. I have yet to see the movie, but I’m at least interested in the science behind it, both fictional and actual. Written and directed by Luke Thompson, the film sounds more like a passion project than anything else. Utilizing the 9 billion dollar facility at their disposal, this group of amateur filmmaking physicists actually went forward and made what looks to be a halfway decent horror movie. What’s not to love about a group of people sharing all that they’re passionate about in a fun and unique way?

I don’t expect heady and brilliant writing ala Shane Carruth’s incredible 2004 film Primer, but I do look forward to some good physics conversation. Something I’m certain won’t be in the film, but I would love to see done in another, are questions relating to the religious implications of discovering the “God particle.” Physicists at CERN adamantly dismiss this notion of a “God particle,” perhaps as a way of separating the science community from strong religious debate and persecution. CERN is not affiliated with Decay. In fact, there is a disclaimer that explains the film has not been authorized or endorsed by CERN. In a way I understand, but that’s why a premise like Decay’s is better suited in the hands of non-invested parties without a conflict of interest looming overhead.