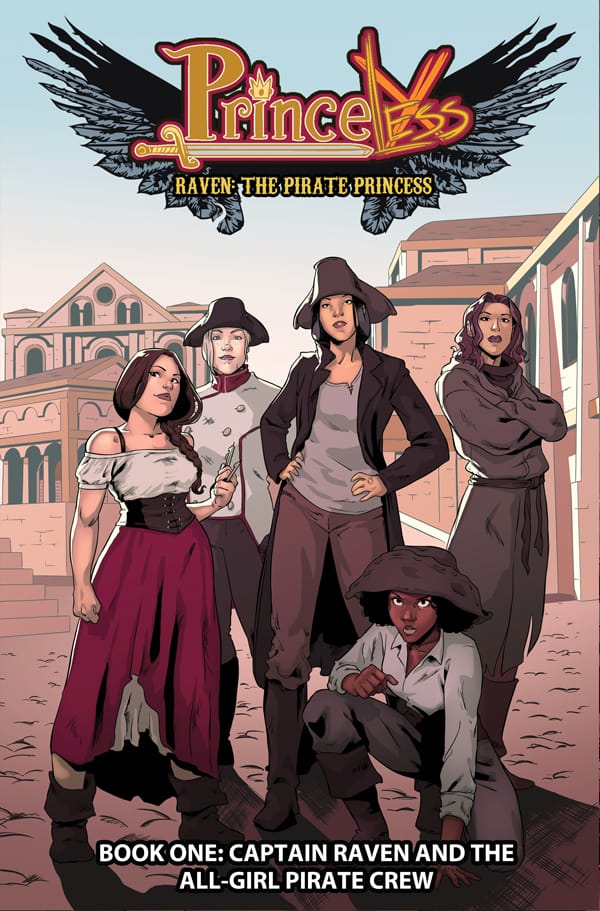 Jeremy Whitley’s Princeless has always been a massively enjoyable all ages book. Focused around a traditional fairy tale setting, it’s the story of headstrong girls making their own destiny. Well, with dragons, vampires, and a pirate that one time along the way.

In fact, that pirate is the main focus of this particular story. Spinning off of the third volume of Princeless titled “The Pirate Princess,” Raven, The Pirate Princess continues the story of Raven Xingtao, also known as The Black Arrow. After being rescued from a tower by Princess Adrienne and an attempt to steal her dragon Sparky, Raven successfully steals a ship and goes out to get revenge against her brothers!

Except that she has no crew, which is where this story picks up.

A lot of this first story is set up for Raven’s later adventures, and that’s perfectly alright because Whitley, Higgins and Brandt make the story of Raven finding a crew a hell of a lot of fun. Peppered with flashbacks to Raven’s youth, we get to know the charismatic Raven a bit more as she sets out to reclaim her destiny. She’s rough around the edges as any good pirate should be, but she also has a big heart and gives respect when it is justly due.

The Pirate Princess skews a little bit older than its counterpart, but not by much. Between Higgins and Brandt’s fluid and occasionally bloody fight scenes and smart humor that could go over the head of the youngest readers of Princeless, the book is probably more suitable for readers late elementary to middle school age. The fact that Raven’s sexuality isn’t a factor in why the book skews older is a breath of fresh air in a world where people treat anything but heterosexuality as “mature.” Yes, it is obvious that Raven is gay, and there’s even a deceitful kiss between ladies that opens the adventure, but it’s just a natural part of the story that it runs with and doesn’t sit to explain for five pages. More like this please!

See also  ‘The Tempest’ is simply a bad film 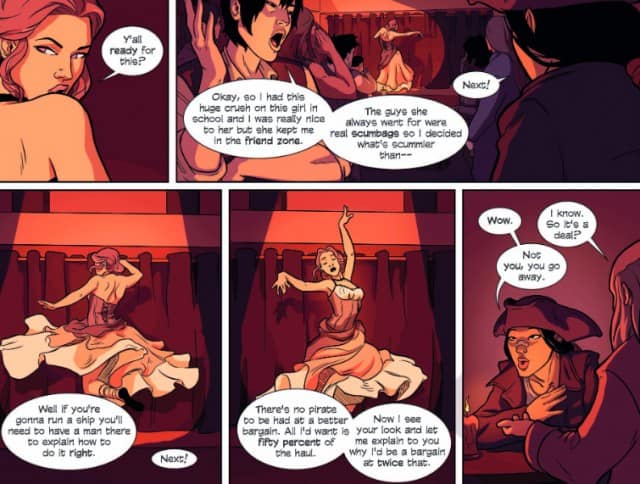 Mostly though, this book is just funny. There are a ton of clever jokes and set ups that range from simple Avatar: The Last Airbender references to a whole scene skewering everything men say on the internet in the guise of Raven interviewing sexist pirate men. The scene even ends with half-elf Sunshine throwing out one who declares “not all men.” It’s hilarious and weirdly cathartic to see it written out and actively rejected like that.

It isn’t just humor making fun of sexists though. So much of this book’s heart comes from Raven and her all girl crew. Diverse in backgrounds, appearances, and personality, every member of the crew is simply delightful from their first introductions to the final pages of the story where they finally set out on their mission. One of the best scenes comes from when tall and somewhat shy Katie speaks to her group of fencing and D&D playing friends, asking them which of them wants to forge their own paths and make their own adventures with her. It doesn’t hurt that this scene is accompanied by cameos from comic greats Kelly Sue DeConnick, G. Willow Wilson and Marjorie Liu, encouraging Katie to speak from her heart.

Even if you haven’t read Princeless, Raven, The Pirate Princess is a delightful comedy adventure story that doesn’t require knowledge of Princess Adrienne’s adventures to enjoy it. With expressive art and an introductory story that hits all the right notes, The Pirate Princess shows why pirates will always be cool. Especially when those pirates are girls looking for revenge and adventure.