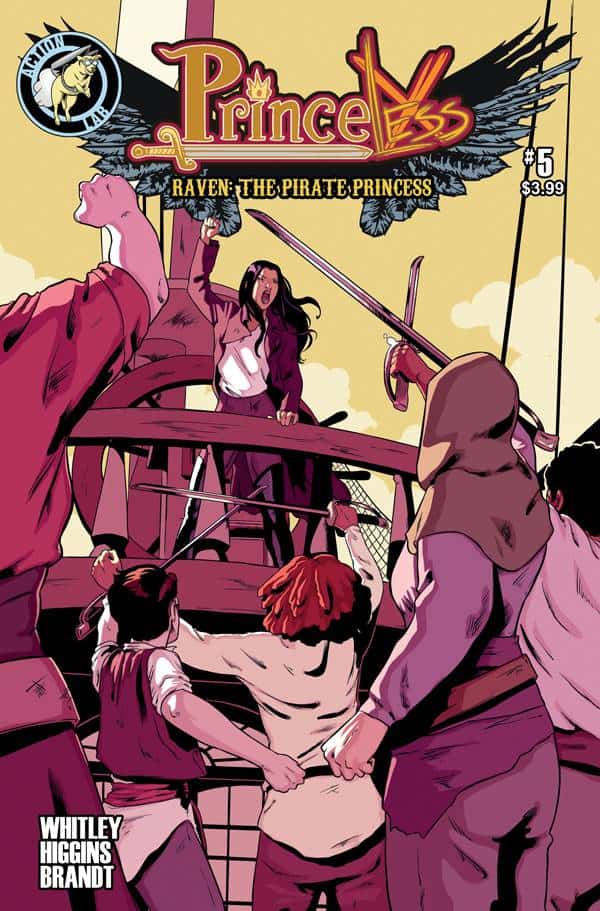 After a short hiatus, Raven Xingtao, her navigator and fellow princess Ximena, the elf Sunshine, the strong and stalwart Katie King, and loads and of  characters in the all-female pirate crew finally set sail to get revenge against her brothers, who stole her rightful title of Pirate King and left her in a castle to be rescued by a prince, in Raven Pirate Princess #5. Writer Jeremy Whitley’s plot doesn’t have much action, and there isn’t any of the usual external threats, like sea monsters, enemy ships, whirlpools, and insane storms, that have been haunting sea-faring adventurers since the Odyssey. Instead he focuses on the struggle of Raven to unite her extremely diverse crew into one unit while still letting them have their individual personalities.

Along the way, he and artists Rosy Higgins and Ted Brandt along with colorist William Blankenship  try to introduce the rest of the huge crew through little vignettes. Some work, like the “blond bombshell” Helena, showing her acrobatic skills by swinging from the ropes to the mast while others are not as effective. It’s excellent that there is a deaf crew member on the ship, Cid, but she is just there for Jayla to offend and then disappears. (She might appear in later group scenes, but her design isn’t very distinctive.) And Jayla keeps acting like a bratty little sister until being saved by the last minute by Sunshine to avoid being the Dawn Summers of the group.

Even if some the side characters don’t stand out beyond their weird names (Pirate the pirate. Really?) or a couple distinguishing features, like Dezzy, who likes to lay out on the deck and read, Whitley does nail the key relationship in Raven Pirate Princess #5, which is Raven and Ximena’s. They clash ideologically with Raven being a fighter, who isn’t afraid to use violence to get revenge on her brothers while Ximena is a pacifist and says that she will never carry arms. This leads to a big fight between them after Raven grabs Jayla’s throat when she puts a ginger sea sickness cure in Sunshine’s mouth. Whitley, Higgins, and Brandt aren’t afraid to show Raven’s leadership struggles warts and all using lots of small, skinny panels for argument scenes. Higgins and Brandt compose a beautiful panel showing the rift between them with an unnamed crew member steering the ship while Raven and Ximena turn away from each other with their arms crossed. Who knows what will happen once they run into real danger.

Even if Raven Pirate Princess #5 is more interested in establishing some of the side characters and general scenario of being on a pirate ship and just living together with lots of people, it’s still a fun read because Whitley’s script has a sense of humor and is relevant to real world issues while not taking you out of its early modern setting thanks to Higgins, Brandt, and Blankenship’s art. (A few great anachronisms aside like a Magic the Gathering type card game that creates some nice bonding between Melody and Pirate.) For example, there is a Muslim pirate on the ship, who wears a hijab, and educates Ximena about why she wears in a friendly way even if Ximena implies that it’s a kind of oppression. However, she alone makes the choice to wear it because there are no men on the ship. Sadly, this character doesn’t get a name.

Whitley takes some nice swings at the patriarchy, especially in Raven’s speech, where she talks about men pitting women against each other in conflict, but that her ship will be different and that they will choose the rules together unless their lives are in danger, which is when Raven calls the shots. Raven grew up on a pirate ship and understands the reality of battle on the sea so her sword training session isn’t just an homage to pirate duels in old movies, but a survival skill her crew needs to know. One thing that her crew decides to reject is the toxic name calling of most pirate ships, which Katie says won’t help in building a bond between crew members. It’s true that there are nicer ways to get someone to do than call them a “bilge rat”.

As far as the art and colors, Higgins and Brandt give each crew member a distinct sense of fashion, hairstyle, and skin color with the help of Blankenship. Some of the women are curvy, others are thin, and some are pretty muscular, like Katie, who takes to the ship’s wheel like a trout in the stream. Raven Pirate Princess is another example of how diversity in storytelling can be organic and not detract from telling a fun or compelling story. White men aren’t the people allowed to go on adventures on the high sea. And speaking of seas, Blankenship makes them a deep, beautiful blue while Higgins gives different characters reactions to its beauty from Raven’s serene face to Sunshine getting super sick because she’s an elf from a desert. Higgins and Brandt’s combination of highly expressive faces with detailed backgrounds for the ship and its various riggings makes it easier to connect with the characters emotionally while being immersed in their world.

The final page of Raven Pirate Princess #5 reveals its cheeky, meta title “On a Ship, Every Episode is a Bottle Episode”. Jeremy Whitley, Rosy Higgins, Ted Brandt, and William Blankenship keep the action confined to the ship and introduce wave after wave of character. Some stick and some don’t, but Whitley crafts some solid moments in his writing like Raven’s philosophy behind running the ship, or Sunshine backing up Jayla when Raven scolds her for putting ginger in Sunshine’s mouth. Because she is a scientist in a world relatively new to it, Jayla is afraid of putting her thoughts out there and isn’t used to being among people who consider her equals. Higgins and Brandt’s faces and character designs make the new additions memorable some of the time, and it will be interesting to see how the partially united, partially dysfunctional crew fares once they face their first internal threat.