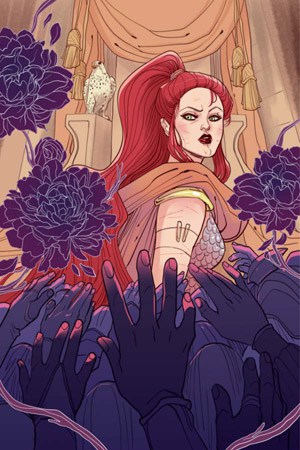 Even though there is a fair bit of sword fights and blood spilled from the opening sequence where Sonja protects a family fleeing Hyrkania from the Black Talons, Red Sonja #2 takes the “sorcery” out of sword and sorcery and substitutes it with evergreen political themes. This time, writer Marguerite Bennett looks at the power of propaganda, especially through things like ethnic stereotypes, to get people to continue to fight wars. In this case, Red Sonja crashes the Theater of the Blue Goat where its chief playwright Midyan no longer gets to write her own comedies, but is given jokes, subjects, and mostly stereotypes to perform by General Maerga, who is the real power in Hyrkania. Because the various ethnicities of Hyrkania haven’t really established so far in the story, some of the references in Midyan, Maerga, and later Sonja’s dialogue are hard to get, but “sheepshagger” is an insult to anyone. Also,

Aneke continues to give the double page spread a workout, especially during the more violent parts of Red Sonja #2. But she also uses it for war of words, like Midyan’s argument with her fellow playwright Leshko about the content of their plays as well as a romantic interlude that concludes the issue and throws a wrench into Red Sonja’s best laid plans. Aneke’s inset panels show action from a different POV or add details to the big picture, like the audience taunting Red Sonja holding their beloved General Maerga captive. Again, like in Red Sonja #1 where no one needed saving until the final page, she must adjust to the new rules of the game. And it’s quite the learning curve as Bennett writes some darkly humorous lines about Red Sonja attributing the people of Hyrkania’s racism to the propaganda plays being written with an evil, enchanted pen or something.

Even though some of her fight choreography is a little awkward, like pitchforks plunging out of nowhere in one sequence, Aneke really sells the power disparity between Maerga and Sonja as Maerga makes a face like a content cat as Sonja is ridiculed on stage. She’s not a one-note villain, who just wants to kill Red Sonja for some random reason, but a skilled schemer, who has earned her place as the real power in Hyrkania. Bennett creates suspense by having Sonja nowhere near to ousting her from power as the issue closes. She is a breath of fresh air from the stereotypical “magic is evil” villains that Sonja faces because her means of control are used by actual rulers today and in the past from Augustus Caesar commissioning Virgil to write an epic poem about the divine ancestry of Rome to the United States military giving access to their equipment for Michael Bay to make his not so thinly veiled propaganda films starring nostalgic robots and actual propaganda film 13 Hours or “Bayghazi” as I affectionately refer to it.

In Red Sonja #2, Marguerite Bennett continues to explore various political themes that she layers into the story of Red Sonja trying to adapt to a more complicated Hyrkania after a long absence. However, she, Aneke, and colorist Jorge Sutil, who heavily emphasizes red in his palette from the blood spurting from the Black Talons to the tomatoes thrown at Sonja and Midyan on stage, don’t skimp on action capturing the She Devil with a Sword at her fiercest in the early parts of the issue. And the twist at the end creates more obstacles for Red Sonja’s difficult task of freeing Hyrkania, who doesn’t really want to be freed, but laugh at crude racial caricatures and then kill the people the comedies were mocking. Shades of empires from the Athenian to American can be seen in the pages where the content of the plays are described and put on.