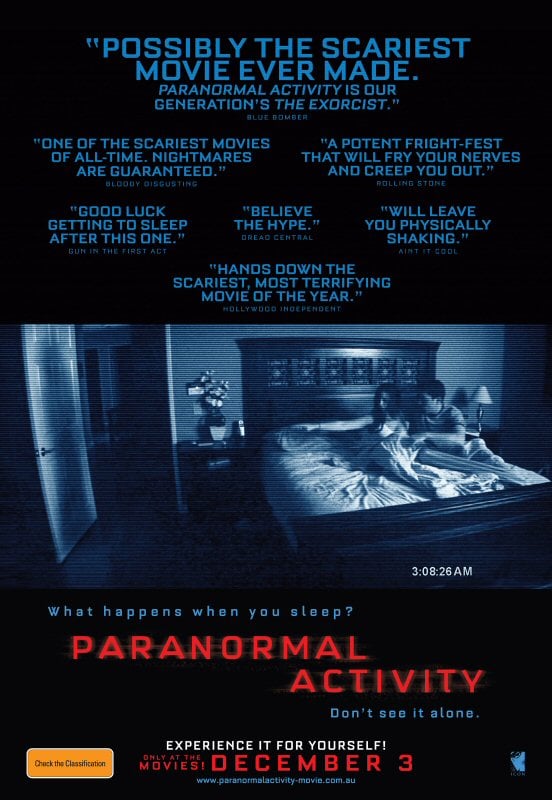 There’s nothing more terrifying than things that go bump in the night while we lay awake helpless under our bedsheets.  Writer-director Oren Peli obviously recognizes this, as he expertly exploits this fear to create the genuinely frightful paranormal thriller Paranormal Activity.

Adding to the fear factor, Paranormal Activity opens with no title or credit – just a sole note of thanks from Paramount to the families of Micah Sloat and Katie Featherston for contributing their story.  Are the events in the film based on “true” accounts, like famed horror classics The Amityville Horror or The Entity?  The filmmakers of Paranormal Activity want us to believe so.

Shortly after Katie moves into her boyfriend Micah’s townhouse, strange things begin to happen – mostly at night.  This prompts Katie to confess that the eerie events are the actions of a restless demon that has tormented her all her life.  Amused by her story and determined to prove her wrong, the cocky Micah purchases a digital camera to record their everyday activities around-the-clock.  Later, when the strange occurrences repeat themselves, Micah’s smugness quickly turns to shock after the camera’s playback exposes Katie’s bizarre nightmare.

Paranormal Activity successfully marks the return of the classic ghost story.  For a long while, horror films were limited to slasher-style gore fests or grisly torture porn, but Peli goes back to basics with his feature debut.  The frights in Paranormal Activity are subtle yet powerful because they’re very close to home.  Is that the house settling in the middle of the night, or someone (or something) walking up the stairs?  Many of us have had to contemplate this fearful question at least once (if not many times) in our lifetime.  Peli relies on our own anxieties to feed Paranormal Activity’s scares and that’s precisely what happens.

As in The Blair Witch Project, the entire film is shot on digital camera in a shaky POV perspective.  As such, the image is unpolished and the colour is dull, which is effective in heightening Paranormal Activity’s eerie and sombre mood.  In fact, some of the film’s creepiest moments occur when the camera is left alone on its tripod and the action is sped rapidly forward.  It’s unlikely that Peli could achieve the same disturbing atmosphere had he shot Paranormal Activity conventionally in pristine high-definition.

Paranormal Activity takes place completely in one location (the director’s own home).  Peli quickly introduces his amorous couple only to slowly escalate their suffering.  As with any ghost film, lights independently turn on and off and objects move on their own, but Peli’s script never veers towards the mundane, and his fresh perspective on the paranormal is engaging till the end. there’s no score, further reinforcing the film’s vérité style.  Peli’s only soundtrack is a low rumble used to alert viewers seconds before every creepy moment, which effortlessly elicits tension.

If you’re curious as to why this review is light on detail, it’s because revealing too much would be shameful.  Paranormal Activity’s brilliance should be experienced by viewers with little or no prior knowledge.

Thanks to the overwhelming internet buzz, Paranormal Activity is moving from its limited midnight run to a nationwide release on October 16th 2009.  Fortunately for the film, it will be getting the expanded audience it deserves.