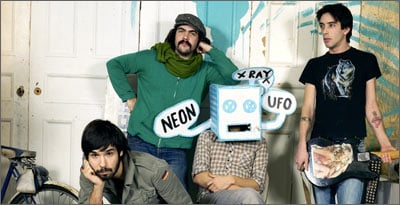 Montreal-Canadian indie rockers Wolf Parade are among my favorite artists working today. Listeners of Sound On Sight Radio will be familiar with the band since we often play many of their tracks on our show.

An article on the Subpop website states “the band sent rough mixes to eleven different video directors, all of whom varied in style, genre, and professional circle. Each director was given just one of the eleven songs on the album. However, upon receiving the various treatments back in response, the band was surprised to discover that, though every director was given a different song, each video contained a similar, if not identical scene.

The band was perplexed, and disappointed, really, and in the end abandoned their “music video for every song” idea. I am not sure if this video was included in that project but it is worth promiting. Watching it I can’t help but think of Danny Boyle’s sci-fi thriller Sunshine.

Their third is named Expo 86 after the World’s Fair of that year that took place in Vancouver (that each band member happened to attend). Read more about their music video project over at subpop.com.