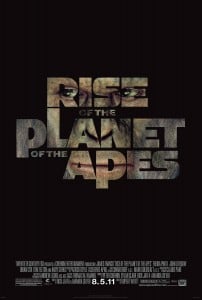 Written by Rick Jaffa (based on the novel by Pierre Boulle)

Rise of the Planet of the Apes is one of the most unexpected blockbuster successes’ in recent memory. Inspired by the 1968 science fiction classic which sees a non-Mexican Charlton Heston crash on a planet, filled with (you guessed it) hyper intelligent apes, a strange tale of role reversals was really a tragic distopian vision. Rise of the Planet of the Apes maintains enough scientific speculation to hold onto its sci-fi heritage, though the film leans heavily towards horror and action.

The film outclasses most of its blockbuster brethren based almost solely on the originality of the set-pieces and the sincerity of emotion it presents. Though not all relationships are carefully drawn (the “central” romance feels tacked on), the ones that work are extremely effective. John Lithgow especially becomes the human heart of the film. He plays Franco’s father, who is in the late stages of Alzheimer’s. He single-handily redeems humanity in the film and helps create a compelling and tragic emotional link between man and animal. Rise‘s effectiveness also rides on the complexity of our emotional response. The film paints a world where animal testing is a successful means of finding cures for horrible diseases but it also demonstrates the cruelty these animals are subjected to. The intelligence that the apes eventually gain is significant, but even before the animals exhibit a great deal of self-awareness which is what inspires their “revolution”. Not to mention the fact that the film is not guilty of excessive personification, and the apes, even at their most sincere and “human” are still shown to be fundamentally animal. An ape is not a human and never will be. We may empathize with their plight but we can’t help fearing them as well.

This leads to the strength of the film’s Golden Gate Bridge climax. Much like Alfred Hitchcock’s The Birds, the sequences

demonstrates humanity’s ineffectiveness when faced with the mighty strength of nature. The only reason humanity is not crushed in the hands of the Apes is merely because they choose to be merciful. A notably divisive epilogue further empathizes our race’s physical shortcomings, raising relevant and troubling contemporary anxiety about mortality.

In spite of the heavily exposition-laden dialogue in early parts of the film, Rise of the Planet of the Apes makes the right choice in sitting back and allowing the apes to communicate through behavior and physicality. Not only is nothing lost, but the audience gains a unique repartee with our future overlords, who consistently demonstrate more depth and understanding than any human characters in the film. All too rare in a studio backed summer release, Rise of the Planet of the Apes contains a handful of surprises, all of which are earned.