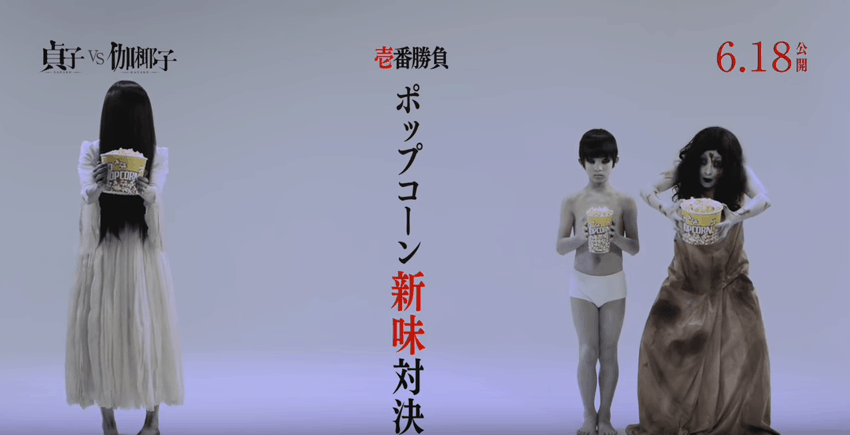 I didn’t post the last trailer for j-horror mashup Sadako vs Kayako, but those who watched it have probably noticed that this thing is starting to look pretty thoroughly silly. And I mean silly even for a film about two dead Japanese girls with wet hair making gurgling noises at eachother. The film, however, would appear to be playing everything with a kind of stone-faced seriousness and severity, and if anything that could just wind up making the film unintentionally hilarious. The reason Freddy vs Jason kinda sorta worked is that it at least had a degree of self-awareness. By the looks of things, Sadako vs Kayako will not, and that could be a problem.

I’d say that these new ads/psa are evidence that the marketing team at least has a sense of humor, but I think this is more just a case of Japanese marketing culture having a tradition of absurdism, and the characters of The Ring and The Grudge franchises shilling out popcorn and warning audience members to turn off their phones is nothing if not absurd. The ads star Sadako, Kayako and Toshio, the ghosts from the franchises, doing their darndest to act spooky in front of a light grey backdrop while selling popcorn, encouraging theatergoers to post photos of their snacks to Instagram, and turn off their cell phones when the movie starts. Given how close some theaters apparently still are to allowing patrons to use their phones during movies, the fact that we have a trio of spirits ready to drag that guy in the front row checking his facebook to the abyssal nether realms is fairly reassuring. I’m not entirely sure that I’d accept some popcorn from Sadako, though. She spends all her time in a well, you think he hands are clean?

Check out the ads below.