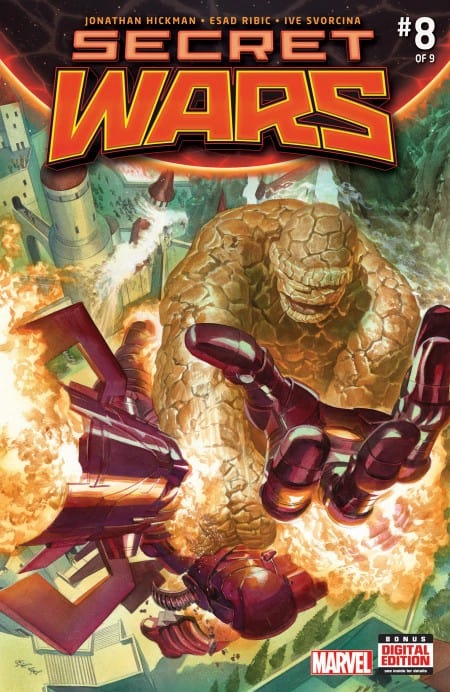 Here it is, the penultimate chapter of Marvel’s best crossover in almost a decade, and boy does it crank everything up to 11!  This is the final battle that reader’s have been waiting all summer and fall for, the multiverse altering climax of Jonathan Hickman’s run on both Fantastic Four and Avengers/New Avengers.  After slowly building to this moment over the previous five issues, readers are rewarded with one of the best issues of the miniseries, as this issue is filled with blockbuster moments, memorable characterizations, and, in typical Hickman fashion, insight into the divine.

Issue #8 does everything right, and yet readers who have been following Hickman since his Fantastic Four: Dark Reign miniseries will find extra hidden gems in this issue as well.  From the reiteration that Galactus, the devourer of worlds, is the servant of Franklin Richards, to Black Swan’s fanatical devotion to her god- Dr. Doom, it seems as though everything in this issue was meant as either a reward or a wink and a nod to loyal fans waiting patiently for months.  The Thing vs. Galactus fight was epic, but all too brief, and Maestro’s treacherous plans were put to a humorous end.  However, it’s clear that Groot and Starlord’s inculsion are only meant to capitalize on the success of Guardians of the Galaxy, and Cyclops’ murder seems conspicuously suspect as he’s the only known casualty not to make it out of Secret Wars so far.

The one who shines brightest however, is Dr. Doom, the one character who has actually seems shafted throughout this duration of Secret Wars.  In this issue however, God Doom turns up!  His confrontation with Thanos is easily catapulted to the top of the most memorable moments of the event, and it contains not only a great “Holy Shit!” moment, but also subtly brings up a theological contrast that really gets to the ideological core of the entire miniseries.  Dr. Doom is at his best, most terrifyingly regal, when written by Hickman, and this issue is a prime example of why.

As he did in the first issue of the series, Ribic is at his best when drawing massive and sprawling battles.  The Thing vs. Galactus fight is rendered incredibly emotional because of Ribic’s pencils, and even though faces have not been a strong suit of RIbic’s, his work with the Thing and especially Thanos, particularly their eyes says much more than words can ever convey.  Although, there is one scene where Franklin Richards looks like a zombie, and another where Susan Richards likes exactly like Suzanne Somers.  Besides these minor gripes, Esad Ribic brings his A-game to the table this time around.

With one chapter remaining of Marvel’s biggest event ever, Hickman and Ribic give readers their very best effort and provide the best issue of the series since the opening issues.  The most important aspect of this issue is that every single thing that occurs on these pages matter.  From Thanos’ confrontation of Doom, Galactus vs. Thing, and the cliffhanger, readers are equally rewarded with great moments, but left eagerly awaiting the final issue of this great event series.  Hickman and Ribic opened up this series with a bang, and by all indications, they aim to close with an even bigger bang.