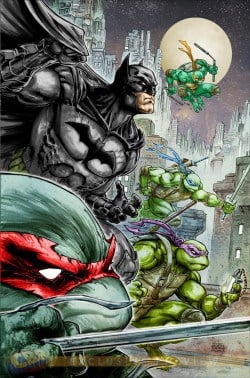 It seems like it’s been an eternity since the announcement.  Batman/Teenage Mutant Ninja Turtles. The title alone sounds like a strange fan fiction.  The fact that the book actually exists is stranger.  The characters seem so beyond the boundaries of each other that the book really shouldn’t work.  But the book works despite these boundaries.

This isn’t the first time that Batman has tangled with characters outside of the DC universe. Judge Dredd, Spawn, even the Predator have appeared on the comic book page with the Caped Crusader. What’s so different this time around is how jarring the juxtaposition he is to the Heroes in a Half Shell. James Tynion IV is helming the miniseries, which should come as a comfort to Batman fans.  Tynion knows how to write Batman, and he’s been doing so for well over four years starting with his backup stories in Scott Snyder’s Batman and more recently with the weeklies Batman Eternal and Batman and Robin Eternal.  It’s clear that he is a fan of the Turtles as well, capturing tiny bites of their personalities in each panel with the help of artist Freddie Williams II.

The story kicks off with a science lab heist. The Foot Clan and the Turtles have been transported to a different world. It’s clear that the plot of the story will revolve around how the misplaced heroes and villains will have to find their way home. Having the story take place in Gotham was a smart move. The setting of the story even led to a very Simpsons-esque moment when Michelangelo states that in their world, Gotham is just an empty field in the state of…

The heroes seem to stack up well against the villains of their counterparts. There is a nice scene in which Shredder threatens Gotham, and the Turtles dispatch of Killer Croc and his goons rather quickly. Splinter also makes a brief appearance right before Donatello geeks out over the Batmobile.  All in all, the book is fun. Williams’ art is amazing,  and every page pops.  The characters all look like they’ve been hand painted, and the style is so unique that you can’t quite place the story in either world. The plot is simple enough, but the character interactions and interesting art is why this book is a must read. There is enough in the book to sate both the Batman and TMNT fan in everyone.