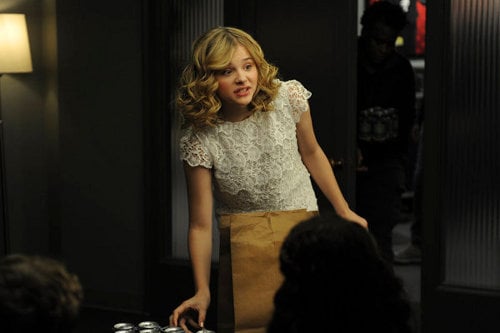 “Standards and Practices” continues 30 Rock’s rebound and features the welcome return of Chloe Moretz as Kaylie Hooper. Moretz was one of many factors that made last year’s “TGS Hates Women” one of the show’s best episodes and if anything she’s even better here. She does a fantastic job of selling Kaylie Hooper’s guile and convincing the audience she possesses the ability to concoct and execute nefarious schemes. One hopes this isn’t the last we’ve seen of her because it seems she may have ousted Will Arnett’s Devon Banks as Jack’s greatest nemesis, and it’s clear Alec Baldwin gets a boost from sparring with her.

Meanwhile, Kenneth’s departure from the Page Program is starting to pay off. Putting him in charge of TGS requires him to stand-up to the very people that have been taking him for granted all these years. It’s a plotline the show has tried a few times already (and once or twice already this season) but it’s the first time it feels like there’s something actually at stake. It’s not the highlight of the episode but for once it doesn’t feel like they’re treading water, as they so often seem to be with Kenneth.

Jenna’s plotline is probably the weak point this episode, considering how full of potential having her reconnect with six children she mothered through an egg donation program would seem. It never really goes anywhere, her beautiful children being just as vain and awful as she is and her eventual connection with the “ugly” one all feels very rote, although it does spawn an amusing Hugh Hefner joke. The episode in general is pretty heavy on running jokes, including one that begs the disturbing question that if Jenna learned the crying trick from Glenn Beck’s prostitute, where exactly did Kaylie get it from? “Lucky,” penned by none other than Ron Swanson himself, isn’t the best half-hour Parks has had this season. It still maintains the show’s trademark sweetness and charm, as the entire season has, but it’s yet another episode that is lacking the propulsive sense of purpose possessed by season three. The episode centers around Leslie’s nightmare interview with Buddy Wood, and while there’s nothing inherently deficient with the main plotline its media satire doesn’t feel significantly different than run-ins Leslie has had with Joan Callamezzo, or Perd Hapley, or Crazy Ira and the Douche. It gives the episode a sense of running in place, which unfortunately has been a theme throughout season four.

What’s helped maintain the show’s status as one of the very best comedies on television are the grace notes, and that is the case with tonight’s episode as well. From Andy’s interpretation of Laura Mulvey’s “Male Gaze” to Jerry’s unmitigated enthusiasm when he realizes the endless hours of envelope licking were all for naught, these moments cut to the core of what makes these characters, and the world of Pawnee, so irresistible. There’s also Ron Swanson silently outgaming Chris in a battle for Andy’s Women’s Studies professor’s company for the evening.

All in all, even the weaker episodes of Parks provide enough to appreciate that the prospect of a month away from Pawnee is a daunting one. The return of Community should make it easier to bear, but expect another review of Parks on April 19th. Let us stop for a moment and appreciate just what an insane show Archer is capable of being. This episode features, among other things, Archer’s dead girlfriend returning as a cyborg, a human-cyborg wedding, Woodhouse casually discussing the best way to clean a cyborg vagina, human-on-cyborg and cyborg-on-cyborg sex, the latter the climax of a bombastic cyborg fight. Until you think back on what exactly you just watched, Archer is the kind of show that is capable of making you take these kinds of things for granted, possibly even assuming they’re the kind of things international espionage agencies deal with on a day to day basis.

One has to give credit to Adam Reed for having created such a fully-realized world. An even more impressive feat considering the fact that the archaic style of the show’s animation is constantly reminding the viewer of its own artifice. The oft commented on running jokes go a long way towards lending the world a three dimensional aspect but it can also be attributed to the show’s determination, beginning with season 2, to develop backstory for these characters. Even if most of them can be reduced to one defining characteristic, the more time we spend with them the more we get the sense that this is a world that extends beyond the walls of ISIS.

It’s a cleverly plotted episode (as are most episodes of Archer) in that it begins as what looks to be a standalone, but once Bionic Barry shows up it connects itself back to last week’s episode. It should be fun to see how they wrap things up, as next week is the front end of a two-part finale featuring none other than Bryan Cranston.