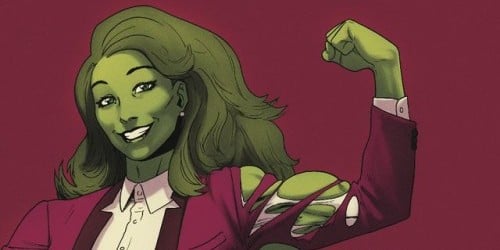 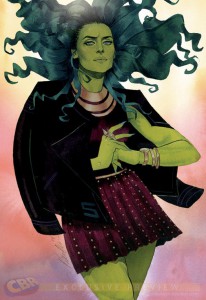 She-Hulk #12 ties up pretty much every loose end in Charles Soule’s run while also leaving the character open for more stories by he, Javier Pulido, and company or for another creator to jumpstart their run. This is really the best way a run on a superhero comic should end. The story follows She-Hulk, her surprisingly powerful paralegal Angie Huang (and monkey Hei Hei), and Patsy Walker aka Hellcat as they take down Nightwatch, who has been masterminding the weird and wacky happenings of the comic behind the scenes, with a mixture of brain and brawn. Soule’s writing goes beyond a simple (or convoluted) conspiracy plot to comment on the nature of heroism and villainy itself, and that the path of redemption is difficult and filled with struggle and temptation along the way.

From the get-go, Javier Pulido gets to cut loose with an flashback battle sequence featuring a mid-80s Avengers lineup, including then-Avengers leader Monica Rambeau as Captain Marvel, Tigra, and She-Hulk. Pulido’s retro stylings have been an integral part of this volume of She-Hulk, and he indulges them in these pages as the Avengers do battle with “Nighteater” using flourishes, like panels of pop art style punches, Ditko-esque magic and energy bursts, and perfect replications of those late Bronze Age costumes. Muntsa Vicente also uses an “old school” style color palette to take readers back to their childhoods (or before their childhoods). However, Pulido also uses more modern storytelling techniques, like framing an explosion in a jewel-like layout displaying characters’ reactions and the impact of the event while Vicente merges black, white, and blue to show the effect of Captain Marvel and Nighteater’s powers pretty much canceling each other out.

This scene (and many others in She-Hulk #12) are interesting on a purely formal level, but Soule makes this flashback important in solving the Blue File and all the various mysteries that team She-Hulk has been chasing down since the end of issue one. Even though it is a legal drama with a dash of the superhero and detective genres, She-Hulk is all about its characters. Even though Pulido’s faces are less detailed than other superhero artists, he imbues them with big emotions and uses several close-ups of She-Hulk’s big eyes for especially pivotal moments. (These eyes also play a surprisingly interesting role in the series’ end game.) And even though this issue has more traditional superhero action than most others in this series (except the one involving Doombots), Soule injects little bits of dialogue to reveal what a character thinks about their path in life or to reveal how they have grown closer together, especially in the case of She-Hulk and Angie.

Throughout its run, She-Hulk has been a fresh take on the superhero genre as practicing attorney Charles Soule combines realistic legal terms with the wacky side of the Marvel Universe. He and Javier Pulido put many obstacles in She-Hulk’s path including trying to extradite Doctor Doom’s son, defending Steve Rogers in wrongful death case against prosecuting attorney Matt Murdock, and just plain paying the bills. However, the book doesn’t stay in the dumps for long as She-Hulk and a mix of new, old, and unexpected friends fight to win cases or untangle the web of one really weird superhuman conspiracy. She-Hulk #12 epitomizes the series’ kinetic Silver Age revival art style, its nuanced characters, and plot twists and turns involving “D-list” Marvel characters and wraps up its big mystery while setting up more cases and adventures for everyone’s favorite big, green lawyer. (Also, Kevin Wada’s covers are the height of fashion-inspired superheroes and will be sorely missed.)