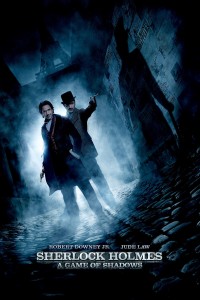 Guy Ritchie’s previous Sherlock Holmes film was marred, especially, by irritating aesthetic choices and an over-reliance on the banter between its leading men. Rather than charming, Robert Downey Jr. and Jude Law’s exchanges were instead annoyingly smug, and the film as a whole was a particularly tedious affair. Some of the problems survive the transition to this sequel, particularly in its first half. The film’s opening stretch contains some more of the dire slow motion sequences relating to Holmes plotting combat strategies, and the Holmes/Watson dynamic is initially as bothersome as before. But these aspects, and the film as a whole, slowly start to improve as the film progresses.

One major factor for this is the introduction of a sense of real physical danger for the characters in their encounters with Moriarty and his associates; to name one example, the use of Ritchie’s particular brand of slow and sped up motion is actually very effective in a woodland pursuit in which the devastating impact of a new weapon is displayed. The “combat plotting” technique also serves a single enjoyable and impactful use in the film’s climactic scenes with Moriarty. Downey and Law’s banter is similarly served well by the escalation of dread and apparent doom, though it must be noted that these cited improvements don’t really occur until roughly an hour in during a welcome move, on a visual level, to various parts of mainland Europe.

The generally reliable Jared Harris proves a terrific presence as Holmes’ greatest foe, and their interactions, as one would hope, provide the best scenes outside of the spectacle. Of the other new additions, Noomi Rapace’s new female lead is unfortunately a forgettable blank slate. Positive credit can be given to Paul Anderson as Moriarty’s menacing right hand man, while Stephen Fry provides the film’s best entertainment as the elder Holmes brother; additions like Mycroft Holmes and an eventual fine tuning of some of Ritchie’s visual quirks mean that although A Game of Shadows is not a good film as a whole, it is a considerable improvement over its predecessor. The potential quality of a second sequel, should there be one, may be interesting to see on the basis of this film, which was genuinely enthralling by the time of its final act. It is a welcome surprise, if a definitely inconsistent one.