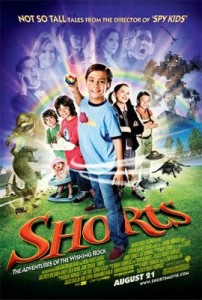 Breezy and entertaining while preserving its intelligence, Shorts is a rarity in this unexciting celluloid summer. The film revolves around a magical rock that allows wishes to become reality.  As one would expect, chaos slowly ensues as every character who gets ahold of the rock finds his wishes backfire into a chaotic mess, as their wishes come true. It is an old concept–you cannot give the power of God to us mere humans.  It got us cast out of the Garden of Eden.

An important element to the film’s success is that the two main child actors are very solid.  Narrator/protagonist Toe Thompson is ably played by Jimmy Bennett, who posesses terrific comic pacing.  Writer/director Robert Rodriguez also gets a funny yet darkly villainous performance from newcomer Jolie Vanier as Helvetica Black.  Her character was supposed to be hiding a crush on our protagonist Thompson.  She began by bullying Toe, while throughout the film her reluctance to do so gradually became more visible.

Rodriguez also packed the film with comedic veterans he knew he could rely on. Standouts included Jon Cryer (who shines in the TV series Two and a Half Men as the straight man to his brother Charlie, played by Charlie Sheen).  Cryer obviously had great fun as Dad Thompson.  Mom Thompson is played by Leslie Mann (an Apatow regular, who offered up a scene-stealing performance in 40 Year Old Virgin and was even better in Knocked Up.)

The city in which the film’s actions take place (Black Falls) is ground zero for the Black Box, a ridiculous multi-platform technological marvel that can do everything from shaving your face to sending a text message.  The consequence of this is that people use the device rather than communicate naturally with each other or the outside world.  In their world, boys look at multiple TV screens to see the weather rather than looking out a window.   There is a scene in which Mom and Dad Thompson are in the same room and are texting each other, rather than speaking.  Rodriguez knows this film is aimed at children, and kudos to him for addressing this issue as they will be the generation to decide how our rapidly evolving technology will be used. Will they use this power to improve the world or will it will be the noose they use to hang themselves? As someone who just purchased a BlackBerry, these subplots gave me pause to consider my own reliance on technology.

The film combines pure childlike fun with a little social commentary, and on those terms it is successful. The film’s approach to its morality is far from groundbreaking; villains are defeated by their own greed and everyone gets to learn a valuable lesson.  While there’s not much new here, it’s certainly more potent in subject matter than Rodriguez’s Spy Kids series.  If you are willing to throw cynicism to the wind for 90 minutes, it is a fun watch.