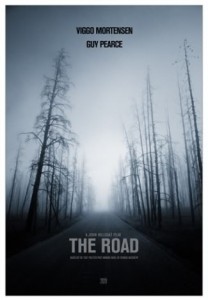 Dimension Films, The Weinstein Company, and 2929 Productions present The Road, a film by John Hillcoat. Based upon the acclaimed novel of the same name by Cormac McCarthy and adapted by Joe Penhall, The Road stars Viggo Mortensen and Kodi Smit-McPhee with notable names in supporting performances given by Robert Duvall, Guy Pearce, and Charlize Theron. This picture was filmed by Javier Aguirresarobe. The Road runs 119 minutes and has been rated “R” by the MPAA.

A father and his son travel south during the onset of the Apocalyptic Winter. Tied together by love like a nearly unbreakable rope and the commitment to remain “good guys” and to “carry the flame” of humanity, they face danger and fight to survive with each new approaching moment. The man and boy love each other as would be expected by father and son. It is a strong bond that can only be broken by death. It is a bond that guides both in their determination and behavior. Each influences the other to keep the moral high ground.

It is difficult to describe how very bleak this film presents the world in the near-future. The sky is gray and lifeless as if covered by an old dirty and musty bed sheet. The landscape seems as lifeless – the trees are all dead and there seems to be no other plant life. The earth shakes and trembles like some old animal dying of a terrible, terminal illness. Most of the people encountered have lost their humanity, giving it up for a singular desire to survive another day. Others, while not willing to do anything bad, have given up their dignity. And it seems more than not have just given up and committed suicide to avoid the inevitable – they chose their death instead of allowing it to come to them in an unknown and likely violent form. It is also difficult to describe how well the boy was played by Kodi Smit-McPhee. At first, one tires of his character saying “Papa” all the time. Then, as the two characters pull you in, you realize that each “Papa” is different just as in paint samples, so too is the tone of each “Papa” different and appropriate for the situation. The tones ring of naive questioning, panic, fear, disapproval, joy, begging for compassion, and many others. Much is said with the tone of voice or just a look on his face and he is very successful in this communication to the audience.

Viggo Mortensen was strong as the man. Dedicated to the safety and survival of his family and its humanity, he was willing to do whatever was needed to ensure that maintained a moral compass while surviving the gauntlet of dangers at every turn. He was not going to quit. He was not going to set a bad example for his son to see. He was determined to do the right thing in impossible scenarios. Often there were times when the love and compassion he gave to his son was reflected back to steady his course. A look at the supporting roles can only start one place. Robert Duvall delivers his character in glowing fashion. It is stunning how good he is in the short role he plays as the old man. Guy Pearce does a very nice job with his role as well, quickly convincing the audience that he is a stranger who may be trusted. That leaves us with Charlize Theron. Her role was greatly over cast. Many a lesser talented actress could have done as well with the role. There was just not enough to the role for her talents to really shine.

The picture is filmed very effectively, delivering the gloom and impending danger as well as the glimmering of hope for the future. Sets and locations and scenes deliver the reality that draws one into the story, making you believe the reality of the situation. The Road is a very good film and we should all sit in a theater and take it in – it tells what the future may hold, both the bad and the good.