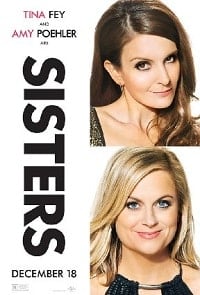 Sisters is juvenile, irretrievably vulgar, and has no redeeming social value whatsoever. It also delivers plenty of huge laughs and is required viewing for fans of slob comedies. Director Jason Moore lays down a simple premise and then lets his talented comedy troupe mine each gag to its tasteless extreme. Sure, it gets a bit too broad at times, but these broads are funny! Sisters is a great holiday movie for anyone who was too rowdy to sit at the adult’s table for Christmas dinner.

For people of a certain age, Sisters might push uncomfortably close to their real-life experience. It’s the story of two 40-something sisters; one an irrepressible free spirit and the other an uber-responsible den mother. Kate Ellis (Tina Fey) describes herself as “brassy,” but a better description might be “emotionally stalled.” She can’t hold a job, still parties like it’s 1999, and her relationship with her young daughter (Madison Davenport) is decidedly strained. Maura (Amy Poehler) is equally trapped, but by her own selflessness. She’s like Mother Teresa… only with more F bombs. While Kate was busy getting drunk and sleeping around in High School, Maura was taking blind kids to the Prom and making sure everyone got home safely. It’s a great polarity that feeds many of the film’s showcase gags.

Kate and Maura return to their childhood home in Florida to discover that their mom (Dianne Wiest) and dad (James Brolin) have sold the house out from under them. They have one weekend to clean out their bedroom, aptly described by mom as “a bottomless pit.” It’s basically where ‘80s nostalgia went to die. Unwilling to let their childhood memories be sold to complete strangers, Kate and Maura decide to throw one last party and invite all of their socially-stagnant High School chums. “Re-vamped Ellis Island” will be a party to end all parties, and cause enough property damage to discourage prospective buyers. It’s the kind of plan that only movie characters could concoct, but who wouldn’t want to party with Fey and Poehler?

The first act of Sisters is kind of a slog. Much of the humor is tired and broad, with Fey and Poehler functioning independently of each other. Both are talented actresses in their own right, but together it’s like a comedic feeding frenzy. Once party preparations finally begin, things kick into high gear. The one-liners and non-sequiturs fly furiously, with each one being more uncouth than the last. Fey and Poehler are true masters of profanity; artisanal vulgarians, if you will. Their brand of sexually-charged banter is enough to make your grandmother schedule an exorcism.

The Ellis party is a collection of High School archetypes that will ring plenty of bells. There’s the guy who is always “on” (Bobby Moynihan) but isn’t actually funny, the sad girl (Rachel Dratch), the overbearing Lothario (John Leguizamo), and the resentful girl that nobody likes (Maya Rudolph). That none of these 40-somethings have progressed past High School speaks to the film’s miniscule themes about letting go of past “glories” and finding a new path. There’s just enough substance here to hold things together and provide a couple of surprisingly-effective quiet moments. Otherwise, Sisters is an exercise in progressive debauchery that leaves good taste at the door with his 6-pack of stale beer.

Though screenwriter Paula Pell is to be credited for some inspired gags, it’s clear that Fey and Poehler have been given a long improvisational leash by director Moore. They make the most of their natural chemistry, inspiring each other to new depths while still operating within the confines of the story. The relationship between Maura and the hunky guy next door, James (Ike Barinholtz), is also handled remarkably well in the script. Normally a thankless role with very few laughs, Barinholtz actually carves out a worthwhile niche as the love interest. He’s likeable, down-to-earth, and has a good rapport with Poehler, even if he bears a striking resemblance to a lost Wahlberg brother. 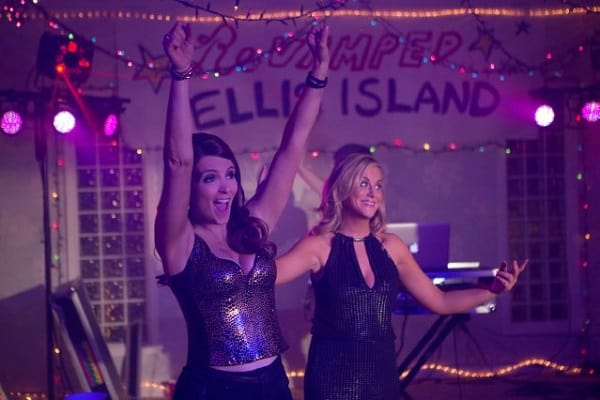 This terrific collection of comedic talent really shines during the party vignettes. Rudolph is at her unhinged best as a girl desperate to ruin everyone else’s good time. WWE superstar John Cena has a hilarious cameo as one of the most stoic and well-stocked drug dealers of all time. John Leguizamo continues to stockpile stellar supporting roles, making you wish someone would let him do more in their movie. Wiest and Brolin are clearly delighting in their chance to cut loose with obscenity, as well.

Christmas is a time of joy and celebration. It’s also a time of reflection and misery. What better way to endure your own pain than to revel in someone else’s misfortune? Sisters proves the old adage that no matter how crazy your family is, there’s always someone who has it worse. At least this family has two of the funniest women in film to take the edge off all that eggnog.