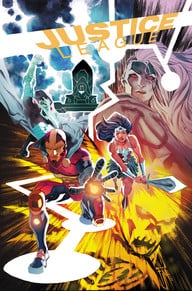 Being caught in the middle of a cosmic war between the two of the most powerful beings in all existence can be difficult to manage. Wonder Woman makes it look easy even with six of her team members finding themselves dealing with problems only Gods can handle. The Darkseid War is gearing up for Act 3 and it’s in this issue where we take a breather to catch up with other parties that the event isolated given recent events.

November spotlighted other members of the  Justice Gods in specific one-shots showcasing what each of the League went through given their new-found status of power. Johns mainly tells the issue through Wonder Woman, and Manapul definitely brings a sense of vibrant energy and gives his second issue in this epic the “legendary status” it needs to keep things going.  Manapul literally booms er…pings in a character that gives Wonder Woman and her companion Steve Trevor something to think about. There are few battles in this issue, and Justice League #46 has more dialogue focused on how war can bring old plot points back to the surface. It’s a case where slowing down on WTF sized shockers every issue is a good thing. Not all of the Justice Gods return to the forefront, and that’s okay. Act 3 of the “Darkseid War” is aiming for a ending that will rip the DC Universe at its seams, and all of the characters need a shining moment in this universe sized epic event.

The war is only going to get more grand and more amazing in scale. Johns’ plots and plans for certain characters go in directions that readers might not see coming, and the way he calls upon previous characters and story arcs proves there is clearly more story to tell in this grand sweeping comic. Francis Manapul handing everything concerning the artwork creates great moments to highlight with the emergence of a character that turns the tide rather quickly. Along with isolated panels with great colors and reference panels to keep us updated with the other characters at play, it all works.

Justice League #46 continues the latest chapter in The Darkseid War rather well especially considering we don’t make leaps this issue but, steps leading up to another fantastic Act opener in just two weeks! Justice League has been leading to this story and truly nothing will be the same after the Darkseid War concludes.