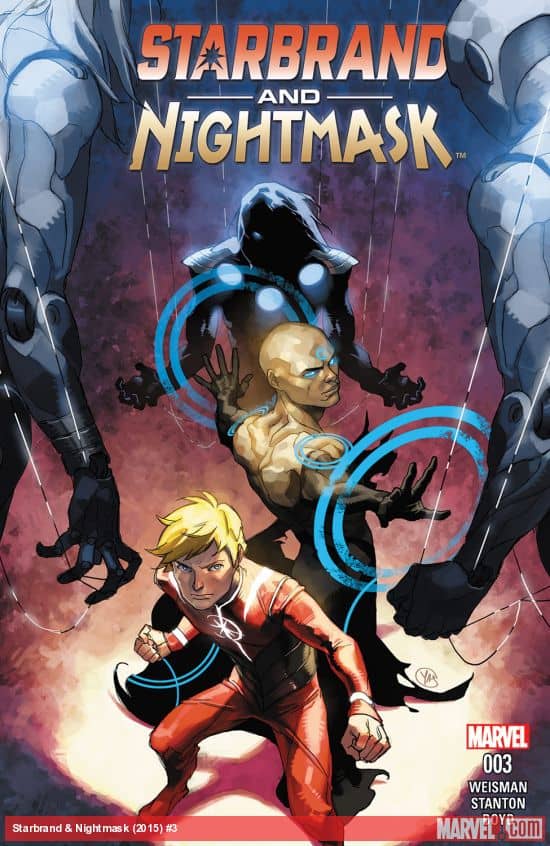 College is a tough time. This rings true for all of the students transitioning to a new point in their lives. While some have to deal with creating the perfect class schedule, others have to deal with three cosmically enhanced supervillains that are threatening both SHIELD missions and your average college campus. It’s no big deal for Starbrand and Nightmask  although, in this issue, things get more dangerous, and the stakes are raised significantly.

Writer Greg Weisman gives our two heroes conflicting, yet comparable thought processes to project the notion that these two work together both night and day. Kevin is our anchor to everything college related, including his budding relationship with Imani and actually buying supplies and bedding for their dorm room. Adam, on the other hand, continues to be the voice of reason and deepens the plot beyond the surface level of three enhanced bad guys causing havoc that can only say one word apiece. As mentioned above, Weisman and artist Domo STanton increase the cosmic scale of the book rather significantly in a way that could tie to other books in All-New, All-Different Marvel if need be. Another difference between the pair is spotlighted later in the issue when the proverbial gloves come off, and Stanton gets to draw the larger cosmos and even features a slew of characters that would fit (and have been seen in) right alongside Ultimates and Silver Surfer. The grandiose nature of Nightmask investigating the cosmic strings of the evil trio shows how he’s still very much in tune with his “upbringing” from his time in Hickman’s Avengers. Starbrand is very much the power house dynamo that is still wet behind the ears, but has enough strength and savvy to hold his own despite complications.

The revelations that round out Starbrand and Nightmask #3 should give the heroes worry given these aren’t enemies you can’t exactly punch and blast, but forces of the cosmos that have been alive since the beginning of existence. With the endgame being Earth’s destruction and college life slowly deteriorating, it’ll be quite the read to see how our college cosmic freshmen survive the experience!