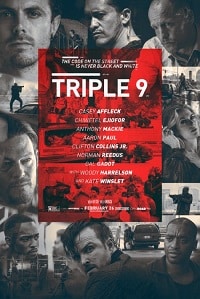 The new crime-thriller Triple 9 can’t quite decide what it wants to be when it grows up. Multiple storylines and characters compete for attention amidst a clutter of shifting sub-genres. While director John Hillcoat gets the look and tone right, the ultimate objective of this nihilistic affair remains elusive. The star-studded cast delivers plenty of compelling moments, but they never add up to much. Ultimately, Triple 9 is a frustrating near-miss that falters beneath the weight of its own ambitions.

The first (and superior) third of Triple 9 is a smart deconstruction of cops and robbers, reminiscent of Michael Mann’s classic Heat. An adept crew of criminals, comprised of ex-military burnouts and corrupt Atlanta cops, executes a near-flawless bank heist in broad daylight. Their leader, Michael (Chiwetel Ejiofor), operates with such ruthless efficiency that he nearly kills an opportunistic partner (Aaron Paul as the junky ‘Gabe’) for stealing a few stacks of random cash. His longtime partner, Russel (Norman Reedus), a hot-headed cop named Marcus (Anthony Mackie), and an amoral detective (Clifton Collins Jr. as ‘Jorge’) fill out the rest of the tightknit crew. They work at the behest of a Russian gangster’s wife, Irina (Kate Winslet), who will stop at nothing to free her imprisoned husband back in Russia. She’s got ‘one last job’ for the boys and she’s not particularly interested if they come back dead or alive.

This is gritty, compulsively-entertaining stuff. Hillcoat (The Road) and his screenwriter, Matt Cook, strike a perfect balance between character development and expertly-staged violence. It’s an exhilarating peek behind the curtain of a deeply-flawed crew of skilled mercenaries. The naturalistic dialogue is dotted with just enough ‘crime lingo’ to make it feel authentic, while Ejiofor and Reedus add an intangible element of chemistry that raises the tension in every scene. The masterstroke is making their chief rival, Sergeant Detective Jeffrey Allen (Woody Harrelson), almost as morally bankrupt as they are. Detective Allen is the kind of cop who arrests junkies and then snorts their stash while they sit in the police car. Harrelson is perfect for the role, using his inherent likeability to keep this scoundrel not only interesting, but a genuine rooting interest.

See also  Sons of Anarchy, Ep. 5.01: Back on the road of fast ridden pavement, with some of the usual bumps 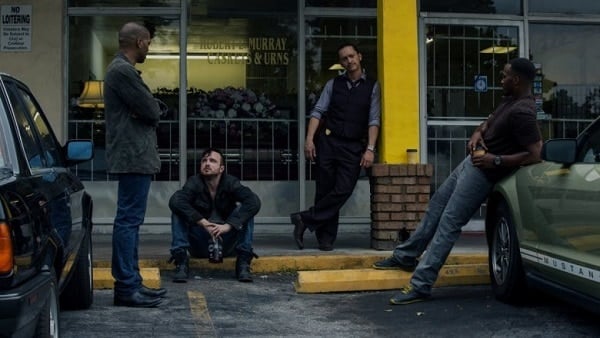 Sadly, Triple 9 quickly goes adrift after this promising start. The middle third is more concerned with ‘cop on the beat’ minutiae that we’ve seen a million times before, and owes an obvious stylistic debt to Hopper’s Colors. Most of the storytelling energy focuses on a new cop, Chris (Casey Affleck), who gets partnered with Marcus and quickly becomes the target of an assassination ploy. In order to secure enough time for their last heist, Michael’s crew will need to execute a Triple 9; police code for an injured officer. Part of the problem is that Chris never suspects Marcus of any wrongdoing; they simply go about the daily business of chasing perps and wrangling with shady informants. There is no tension or distrust between them, making their relationship feel flat and lifeless. More troubling is that Hillcoat never divulges the ultimate plan for Chris’s demise. We know that Marcus plans for the hit to happen at a housing project, but every scene takes place in a housing project. When Chris takes point at a daring drug raid, we aren’t sure if this is part of Marcus’s plan or just a random police event. The scene itself functions as a capable action set piece, but it feels disconnected from the film’s propulsive opening.

The final third comes completely unglued, descending into a haphazard series of double-crosses and “surprise” twists. It feels like the climactic pages from Scorsese’s The Departed got shuffled into Cook’s script. Not surprisingly, mixing the defining elements of successful films like Heat, Colors, and The Departed doesn’t work. While Hillcoat executes the story points from these sub-genres effectively, they simply don’t mesh into a cohesive film. It’s a case of too much of a good thing becoming a muddled mess. 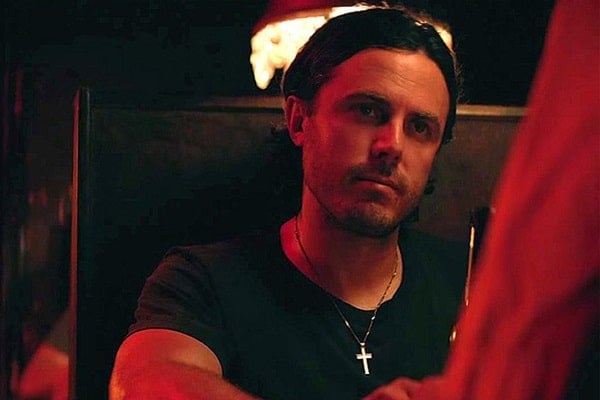 The acting choices are all delightful in their own way, even if they clash stylistically. Harrelson and Winslet are at their pulpy best (complete with Winslet’s outrageous accent and Harrelson’s goofy prosthetic teeth), while Affleck and Mackie gauge their performances for a more realistic cop drama. Ejiofor, Reedus, and Collins are all geeked up for a fight with the Russian mafia, while Paul seems rightfully confused by his sudden desire to grow a conscience. With this many genre conventions thrown against the wall, it was inevitable that the actors, no matter how gifted, were bound to get sticky.

There is probably an audience for a competently-crafted thriller like Triple 9, but most people will leave the theater frustrated by its kitchen sink approach. With each new crime-thriller that falls short, you gain a new appreciation for the successes. Heat is often praised for its style and visual flair, but Mann’s ability to deftly juggle multiple storylines and shadowy objectives is what made it work on multiple levels. Triple 9 has the same slick veneer but it lacks the focus to penetrate any deeper. Sadly, Triple 9 is just a flesh wound.