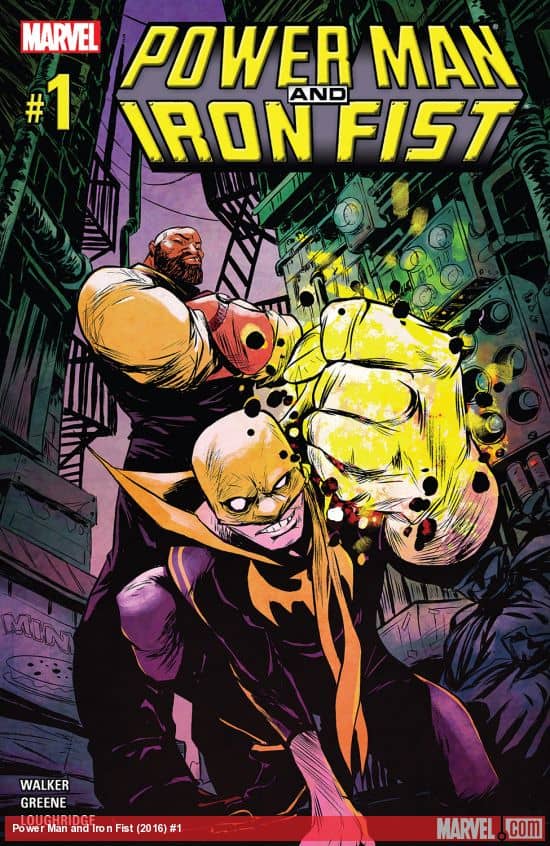 The boys are back and better than ever in Power Man and Iron Fist #1. Luke Cage (Power Man) and Danny Rand (Iron Fist) are coming out of Secret Wars in a return to form as the Heroes for Hire. The old saying goes, “The more things change, the more they stay the same.” and this has never been more true for the heroic duo. While Luke insists the band is not getting back together, Danny can’t stop talking about it and is clearly energetic about doing what needs to be done. The reason behind the two coming together are more personal and close to the chest than readers might think. Writer David Walker plays on the history of the pair, and that is when the emotional beats and plot progressions happen and set up later events in the first arc.

Throughout the entire issue, David Walker, Sanford Greene, and Lee Loughridge all work in unison to give this book its own flavor from start to finish. It has all of the vibrancy and energy of a 1980s buddy cop film, and it has its own frequency in the Marvel Universe. Luke has the outfit  of a businessman, and his personality is trying to be the one that claims that Heroes For Hire isn’t back together. He sees this as just owning up to a personal favor for an old friend and has some humility He’s a daunting figure in his own right and given the mindset of him not pursuing the hero life and trying to talk his way out of conversations with Tombstone is a nice change of pace. Danny, on the other hand, is absolutely giddy (in artwork and all) at the thought of the team getting back together, and it shows.

Greene and Loughridge show great control with their art and colors smoothing out the edges and seamlessly transitioning between locations. They even weave funnier bits into the background around Luke and Danny. It is 2016, and seeing a citizen with a selfie stick getting a picture of the dynamic pair fits perfectly because of the fact the two are either walking or driving to wherever they’re needed. Walker also give us a reminder or two of  how the two longtime friends are different when it comes to fighting styles in a scene that will hopefully be a part of the Marvel Cinematic Universe when the Defenders eventually assemble on Netflix. While Danny is more nimble and focused on breaking bones like a action film star, Luke crushes everyone and everything in his path with his frame. These different fighting styles  speaks to the two as a pair, and how both can move past their differences to strive toward helping their common friend…even if the friend  might be leading us toward a path of heartbreak for one hero and is also the first arc’s big bad villainess.

All in all, the defining Marvel duo of this side of New York received a great first issue in Power Man and Iron Fist #1, a new direction to keep them grounded with the little guys and gals of the city, and a style all their own to give this book the voice it needs to stand out. That itself is cause for a “Sweet Christmas”.