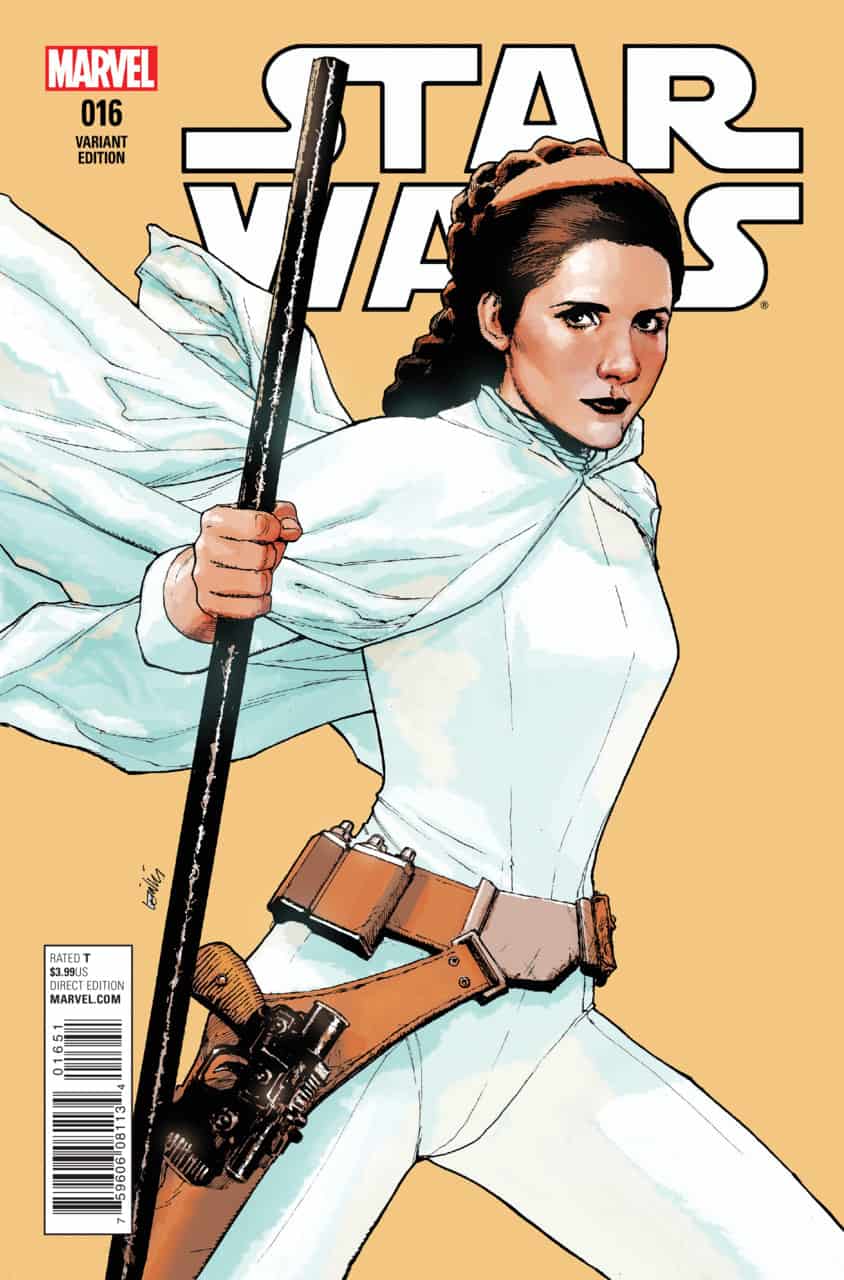 “Smugglers… I hate smugglers.” Such are the words of Dr. Aphra regarding Sana Starros after the mercenary declines good credits to jailbreak Vader’s former ally from an allegedly unassailable Alliance supermax. They are, much like Aphra herself, a clear reference to Harrison Ford’s second most famous role, Indiana Jones, and the good archaeologist’s signature phrase, “Snakes… I hate snakes!”

The brief interaction between Solo’s gender-swapped doppelgänger and his former partner-in-crime is a microcosm of everything good and bad, genius and cringe-worthy, since Marvel reclaimed the Star Wars license. Aphra is classic Star Wars: hardly original, obvious in her inspirations, but taking on a life all her own through sheer style and fitting effortlessly into the tapestry of tropes that is the Galaxy Far Far Away. Aphra is exactly the kind of character Kasdan, Arndt, and Abrams were trying to create in Rey and Finn.

But if Aphra is the Han to Vader’s Luke, Sana is the series’ Jar Jar or Jaxxor. She may not be the awkwardly unfunny comic relief, but she is reviled by fans, a disparate element simply shoehorned into the series. She adds nothing to Solo as his former compatriot in con artistry – already the Corellian has his bromance with the Wookie serving such story needs. She in no way works as a romantic rival for Leia – Ford and Fisher’s chemistry on screen was too strong for readers to regard any potential partner but the princess as perfect for the old pirate. Even the hint of a history between her and Aphra makes the otherwise scene-stealing archaeologist less likable – if having Aphra in this arc means having Sana as well, the book would be better without either. Commander Karbin would make a better inclusion – and he’s just the worst.

As for Han and Luke themselves, the promise of their partnership in illicit activities in this issue and the coming arc seems an unfortunate left turn from the series’ direction thus far. The one connecting thread has been Luke’s quest to learn the ways of the Force and become a true Jedi. While his progress down that path is limited by the timeline of the films, having him completely abandon enlightenment for criminal enterprises hardly seems true to the character.

Still, Sunspot Prison is one of the most intriguing locales added to the Star Wars universe since the new continuity wiped away the likes of Tython and Had Abaddon. Sunspot certainly seems inspired by Mass Effect, particularly Purgatory penitentiary (also an astrological Alcatraz) and Cronos Station (a hidden fortress in close proximity to a dying sun). Mass Effect itself obviously drew from Star Wars, but Marvel and Disney would do well to reciprocate the reverence; it at least be better than the narcissistic nostalgia that caused most of the criticism towards The Force Awakens. For some reason, the identity of the lead assailant on Sunspot Station is being kept a mystery, but the most likely candidate would be Dengar, given his prominent presence in the series thus far and his inclusion at the end of last week’s Darth Vader #16. 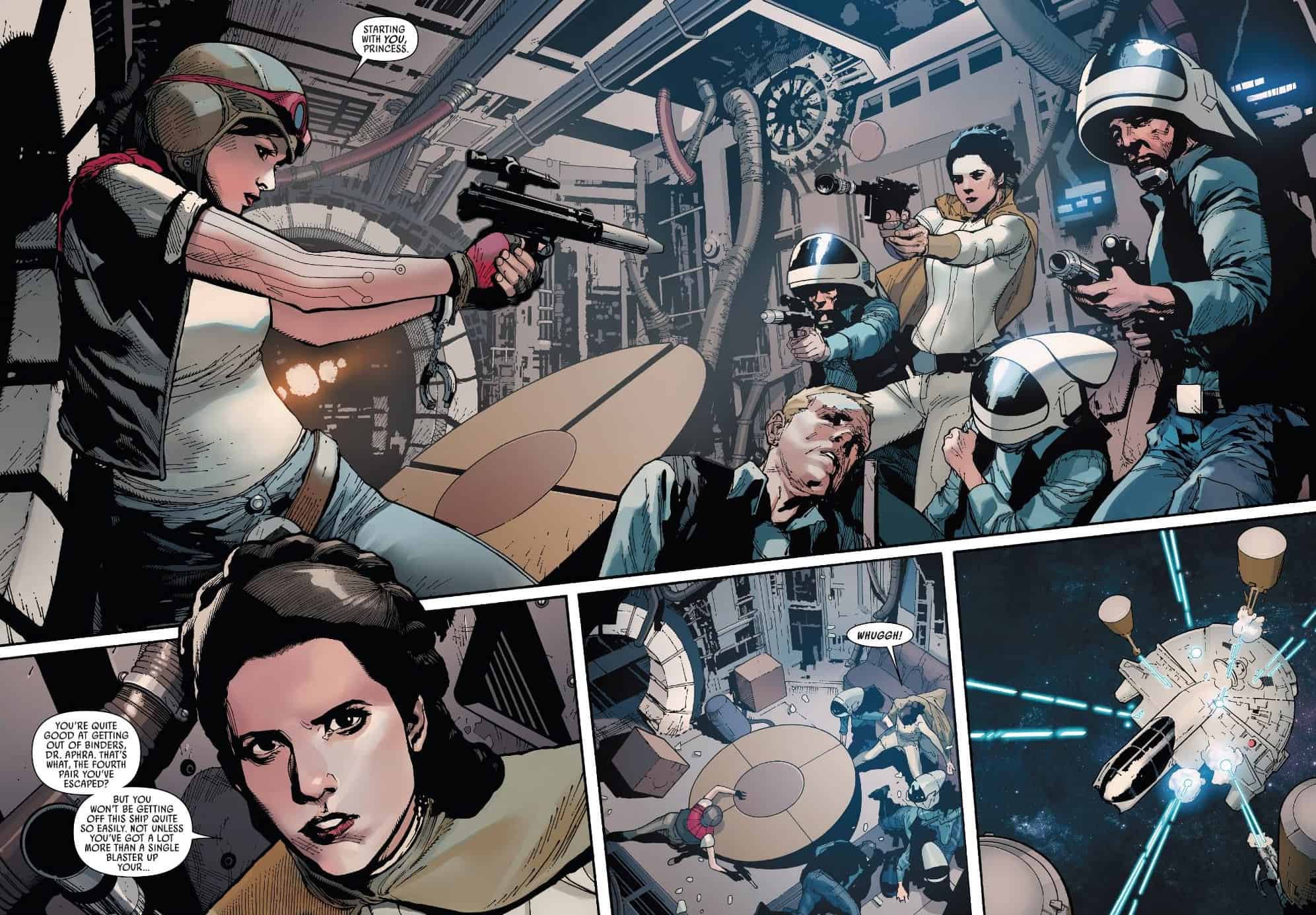 Leinil Yu returns to Star Wars after his fantastic debut in Darth Vader Annual #1. He here has the opportunity to illustrate many more familiar faces than merely the Sith Lord’s mask, and capturing so closely such likenesses surely speaks to his skill as an illustrator; Luke alone bears little resemblance to his live action equivalent. Yu’s Princess Leia is particularly pulchritudinous; he captures Carrie Fisher’s enchanting eyes – like shining stars set against the beautiful blackness of the night skies.

“Rebel Jail” is off to a less promising start than previous storylines such as “Skywalker Strikes”, “Showdown on the Smugglers’ Moon“, or “Vader Down“. But even mediocre Star Wars books are among the best offerings at Marvel at the moment, and Jason Aaron has accumulated enough good will with such an otherwise outstanding series that as single middling issue is by no means reason to miss even out on the adventures going forward.