The Nintendo 64 was in heavy demand upon its release in 1996. Time Magazine called it “that rare and glorious middle-class Cabbage Patch-doll frenzy.” Nintendo’s third home video game console (nicknamed N64) was launched with two games outside of Japan: Pilotwings 64, and Super Mario 64, arguably one of the greatest video games to date, and one which all platformers would be compared to henceforth. Super Mario Bros. defined the standards for side-scrolling platform games in 1985, and with Super Mario 64, Nintendo took the franchise to a whole new level.

Nintendo set itself a nearly impossible task when creating Super Mario 64. It was one of the earlier three-dimensional platform games, with degrees of freedom through all three axes in space, and featured relatively large areas which are composed primarily of true 3D polygons as opposed to only two-dimensional sprites. The game established a new archetype for the 3D genre and showed us what the future of video games would soon look like. From the moment players turned on Super Mario 64, the differences were apparent. Players heard for the first time, the now-iconic “It’s-a me, Mario!” (voiced by the delightful Charles Martinet) and watched Nintendo’s mascot emerge from a pipe to reveal a full view of the game’s 3D model. Mario sounded different, he looked different and he moved differently. And ever since, the game has left a lasting impression on 3D game design.

As for the difficulty, Super Mario 64 is a game that anyone can play, but not everyone can finish . The difficulty level is really up to the player and how many of the puzzles he or she wants to solve. The game consists of 15 massive courses in which Mario can attain seven stars per course, with numerous secret levels and bonuses. Reaching the final Bowser and freeing the princess won’t take long for most gamers to complete, but getting all 120 stars and meeting Yoshi at the end, can take weeks depending on the skillset of the player. In order to 100 percent complete Mario 64, players must explore everything, and I do mean everything. To reach the final battle with Bowser, 70 Power Stars are required – however, you need all 120 for 100% completion, some of which are nearly impossible to find without resorting to some sort of guide.

The castle itself serves as a great place to learn and experiment with all the moves at Mario’s disposal. Rather than the dull and time-consuming tutorials of many modern games, here the player learns as they go. The first course for example, Bob-Omb Battlefield, is laid out in a way so that players will slowly become adept with Mario’s abilities which are far more diverse than those of previous games. The player can make Mario punch, kick, kick jump, hip drop, triple jump, long jump, back flip, somersault, and even perform the wall kick like Ryu from Ninja Gaiden. Mario can also carry certain items in order to help solve various puzzles and help him cross certain obstacles, as well as swim underwater at various speeds. Surprisingly, the usual Super Mushroom and Fire Flower are absent in this game; Instead as the game progresses, Mario gains the power to wear new hats, in the form of colored Caps, with multiple abilities exclusive to each. The Wing Cap (red) allows Mario to fly, the Vanish Cap (blue) makes Mario invulnerable and invisible to attacks, and the Metal Cap (green) causes Mario to transform into Metal Mario, which allows Mario to walk through streams of fire without taking damage, avoid water currents, and easily walk under water.

Although the level themes are standard video game environments (water world, ice world, lava world, etc.), the variety of these levels and the scale of each course is simply breathtaking. There is just so much to explore and there’s never a dull moment to be found. And like previous Mario titles, secrets play a huge part of the experience and experimentation is integral to fully enjoy playing the game. Super Mario 64 features more puzzles than earlier Mario games and since it was developed simultaneously with The Legend of Zelda: Ocarina of Time, some puzzles were actually transferred over from that game in order to assist in having Mario 64 ready for launch. One of the best levels (Tick Tock Clock) has Mario running through the inner workings of a giant clock. Mario must deal with the clock’s moving gears, pendulums, and other obstacles that speed up, slow down, or stop moving altogether depending on what position the clock’s minute hand is in when he jumps into the level. Meanwhile, Cool Cool Mountain bucks the trend of having players scale a mountain and instead starts you at the very top. There are cannons, slides, broken bridges and secret areas that allow Mario to teleport. Mario begins at the summit (unlike Tall, Tall Mountain) and must progress down the icy slopes and avoid falling into a bottomless pit. Throughout the course you will find the Headless Snowman, a lost penguin searching for its mother and even a quick reference to Santa Claus. In another level (Jolly Roger Bay) Mario must dive down hundreds of feet into murky water and enter a sunken pirate ship half buried over the ocean’s floor. The fifteenth and last course in Super Mario 64 titled Rainbow Ride is often cited as the greatest level ever created for any Mario game. Set in the skies, Mario has to use several flying carpets to get from one platform to another. Rainbow Ride is also a level with very little backtracking and offers different ways to get around, which makes it possible for Mario to collect the stars in any order he desires.

This isn’t to say that Mario 64 is a perfect game. Not every course has replay value, but players are forced to play through each and every course several times. The swimming stages, for example, can feel like a chore. Underwater levels in any game are usually the least interesting if only because they eliminate the basic movements and special abilities from the character you play. The best stages in Super Mario 64 require you to use Mario’s various abilities and offer multiple ways to get around and unfortunately, the water levels do not. Still, even after all these years, the graphics are terrific and the animation is gorgeous. 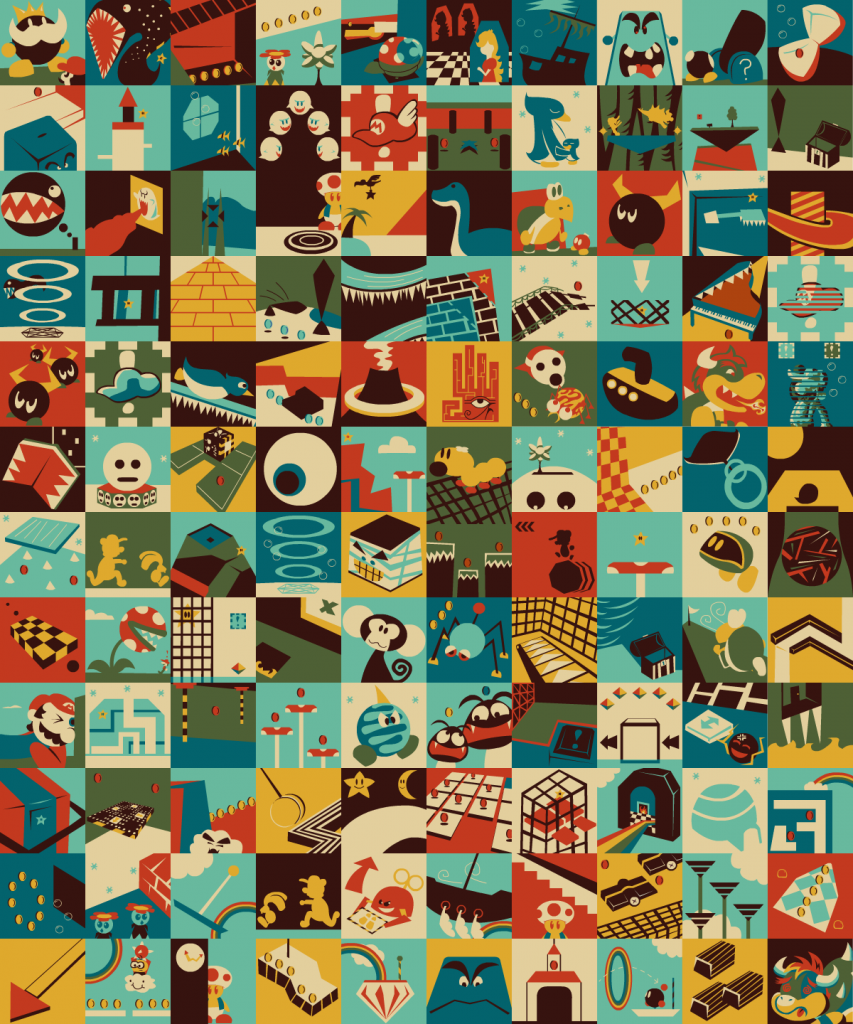 Rather than jumping head first and designing the levels for the game, Shigeru Miyamoto focused on Mario himself. One of the first things created for the game was the rabbit that Mario needs to chase around at one point. The idea was to make sure Mario’s move set was flawless first, before going ahead and producing the rest of the game. Making the transition to 3D was no easy feat and so Miyamoto wanted to make sure the controls felt right. If the simple task of chasing the rabbit worked, then he knew he could go ahead with the new control scheme. His attitude in creating Super Mario 64 is nothing short of genius. Since previous games used the directional pad and two buttons to control Mario, Miyamoto didn’t want to over-complicate things for players, and so despite the amount of new moves Mario can perform, Super Mario 64 uses only three buttons and the analog stick – which isn’t a great in increase from the Super NES days. Another important addition (and something we take for granted nowadays) is the circular shadow that sits below Mario at all times. The 3 dimensional rendering of Mario 64 is ultimately filtered down to a flat image on the screen and depending on the angle and the available scenery against which to judge Mario’s position, the human mind can have a hard time figuring out where exactly Mario should stand. The simple addition of a shadow located directly under Mario minimizes this problem and help players accomplish the simplest and toughest tasks.

Overall, the biggest obstacle in the game is finding the correct viewpoint and where Super Mario 64 disappoints is in the camera implementation. Yes, the player’s ability to fully control the camera was revolutionary at the time, but the problem is the camera occasionally blocks the player’s view completely, and can be extremely frustrating when you lose a life. Learning how to manipulate the various camera options becomes a chore in itself, and often you simply cannot see where you’re going. And since the default camera moves of its own accord, it leads to players accidentally falling to their death. Apart from the frustrating camera, the other major nitpick about Super Mario 64, is the lackluster end boss battle with Bowser which repeats the same scenario as the two previous fights, not to mention the stage bosses, like the Bob-Omb King, Wiggler, and Whomp King, are far too easy to beat. The other downside to Super Mario 64 is the soundtrack. The music was composed by veteran composer Koji Kondo, who created new interpretations of the familiar melodies from earlier games as well as some new material. The problem with the soundtrack is that is full of repeat tracks noticeably towards the end of the game. One track sounds like the theme from Seinfeld and the track that plays during the battle with Bowser sounds like it came from some cheesy old 80’s cult film.

There is no doubt that Super Mario 64 was nothing short of revolutionary. The title is acclaimed by many critics and fans as one of the greatest and most revolutionary video games of all time. The flaws, although few, are overshadowed by the awe-inspiring level design, sophisticated 3D graphics, brain-busting puzzles and sheer imagination. Super Mario 64 is tough to beat – and one of the few games in the series that rewards curious, brave, determined and stubborn gamers. The sheer scale of the achievement is something to admire. Not only does Super Mario 64 stand the test of time — the game is a masterpiece in the truest sense of the word.