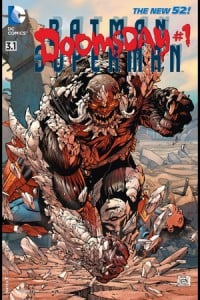 
Superman Doomed, a DC Comics One-Shot that will be continued in Action Comics #31, has all the ingredients of a great comic. Cosmically powerful monster bent on destroying the earth? Check. A Man of Steel who is wrestling with the consequences of the choices he may have to make to defeat said monster? Check. Cameo appearances by other members of the Justice League? Check. Artwork that conveys the epic scope expected of a comic featuring Superman and Doomsday? Check. All of the ingredients are there. Somehow, though, it doesn’t quite come together.

The story begins with some high-tech fighter jets flying in to attack a Doomsday who is already on the rampage in the Bahamas. The first panel of Doomsday in action is glorious. He looks powerful and deadly – like a modern incarnation of one of Greek mythology’s Titans. His mere presence is causing every living thing around him to burn. The jets fly too close as they attempt to drop bombs on him and they suffer massive malfunctions and begin to fall from the sky. Superman flies in and rescues the pilots in another dramatically drawn panel that captures the Man of Steel at his best. He saves the pilots, but is far too late to save anyone else on the island. Doomsday leaves before Superman can confront him, leaving the Man of Steel with a lot of questions. Doctor Shay Veritas gives him some answers. She says, “When this Doomsday emerged from the ocean the water boiled around him. The sand turned to onyx beneath its feet. People within a hundred yards spontaneously burst into flame. Even the brick and stone of the buildings on the island couldn’t maintain molecular cohesion. They simply fell apart.” This leads to the fact that not even Superman can survive more than ten minutes in Doomsday’s presence. This won’t be an easy win for the Man of Steel.

Doomsday teleports to various points around the globe causing vast amounts of damage; meanwhile, Superman contemplates how dealing with the monster may impact his psyche. While Superman is busy brooding, Steel and Wonder Woman confront Doomsday in Africa and don’t fare too badly despite the earlier assertion that only the Man of Steel could stand even a fraction of a chance against it. This is wherein the problem lies. Yes, Steel gets beaten up a little and so does Wonder Woman, but her wounds are even less than Steel’s. Yes, Superman shows up to save their bacon, but Doomsday teleports away without facing the enemy he desperately wants to destroy. Each almost-confrontation is drawn beautifully in panels that convey the action on a grand scale. However, Doomsday just doesn’t live up to the hype. Neither does Superman, for that matter. He spends a lot of time brooding over what he should do while taking advice from characters ranging from Batman to Lex Luthor. Artist Ken Lashley draws a final fight seen that is both action-packed and of epic proportions, but the final twist of the plot doesn’t live up to the excitement promised in the early stages of the book.

The bottom line on this comic is that it has plenty of excitement, a lot of high quality artwork, and a story that continues in Action Comics. That makes it well worth the money. However, if you’re expecting a massive, five-page, slug-fest between Superman and Doomsday, you will likely be at least a bit disappointed.