Warning: May contain minor spoilers on class stories and on Shadow of Revan and Fallen Empire stories.

I’ve been playing SWTOR for several years now and I’ve always had backstories for my characters in the world of role-play. I’ve never actually sat down to write them down however, so I’m glad to have a good opportunity to do so now.

Rosiet is the first character I ever created. I actually played through all the classes as female characters before creating any male characters, so Alagos and Brenum came later. There was no backstory at first. I was not as much into RP and don’t often role-play with other players. However, as a writer, and one who enjoys writing fan-fiction, I enjoy creating a story for my characters. So today I shall present you three who form a family and also reveal a bit more behind the creation of these characters.

For those who have gamed with me a while all call me Rosie, due to the character Rosiet. The ‘’T’’ was not to be fancy, but simply because ‘’Rosie’’ was already taken. But the real Rosie is actually my cuddly pink plush hippo. Even adults have their little stuffed animals. The plushy Rosie, sometimes ‘’chills’’ with me. We can go on to saying that she is one of my alter egos as she has a personality which is an extension of my own, like my other alter egos. When I was creating the character Rosiet, I looked about for inspiration with the name, saw the plushy Rosie, and voilà.

Okay, so Rosiet is a Zabrak. She was born strong in the Force and became a powerful DPS Jedi Sage, the Barsen’thor of the Jedi Order. While on a mission that involved only Jedi Consulars, since it required their special affinity with the Force and their long ranged Force abilities, she met Alagos. Alagos is actually Sindarin (Lord of the Rings Elvish) for ‘’storm’’. Alagos was also a Jedi Sage at the time. They eventually married and had a son, Brenum. Now, Alagos is a Miraluka, which is a species who is blind of sight and sees with the Force. Brenum inherited a lot from both his parents, but was not blind from sight. He might look human, but under that well kept blue hair hide his Zabrak horns.

Brenum is actually the name of a character I created in a fan-fiction story I wrote. The relation between the two would be that having liked the name, his parents named him thus, but Brenum was quite fascinated by the original Brenum Jedi. The original Brenum Jedi wielded two lightsabers, one yellow and one blue. The SWTOR character Brenum wields a double bladed saber, the crystal’s core is yellow and the exterior is blue. He is very inspired by the story of the other Brenum and holds the person in high regard. It is not clear if the other Brenum existed during the same time as the character Brenum.

Brenum is a Jedi Shadow, so also a Consular, proficient in stealth and in severing the Force from another being. His father was required to leave on a dangerous mission to infiltrate the Sith and his goal was to infiltrate the Dark Council. For this to work without failure, Alagos deemed it would be best to sever his Light Side powers so that he could pass more believably as a Sith. Brenum was the one who aided him in severing those powers from him, leaving enough of the Force for his father to learn anew. Alagos thus infiltrated the Sith and became a Sith Sorcerer, which in the world of SWTOR, is the equivalent of a Jedi Sage. Alagos is the exact same as Rosiet, except in Sith version, damage sorc versus damage sage. Since Alagos had already begun learning some lightning abilities prior to having his Light Side powers removed, it caused a slight backlash during the process and created his facial scars.

Alagos eventually managed to become a member of the Dark Council and acts as a relay between the Jedi and Sith. There are those who are willing to work together for a main cause, such as against the Revanites. There are other on the Dark Council who know Alagos’s true nature (such as Shadiesse, which I will touch on more in another backstory blog) and who are working with the Jedi in order to reshape the galaxy. However, Darth Marr who is the head of the Dark Council, is unaware of Alagos’s true allegiance.

In SWTOR, there is only one way someone on the Empire faction can end up on a planet that is made for only the Republic faction, such as Coruscant, and that is through Strongholds. ‘’Rosiet’s Temple of Light’’ is on Coruscant, and Rosiet and Alagos have their room and Brenum has his own room. They share the stronghold with others from the Republic, such as Havoc Squad and other Jedi. Throughout the time that Alagos was still on trial as a Sith and it was tricky for him and Rosiet to meet, they had friends (a smuggler and in Imperial Intelligence officer) who were able to smuggle Alagos with a Gonk Droid disguise, for secret meetings. 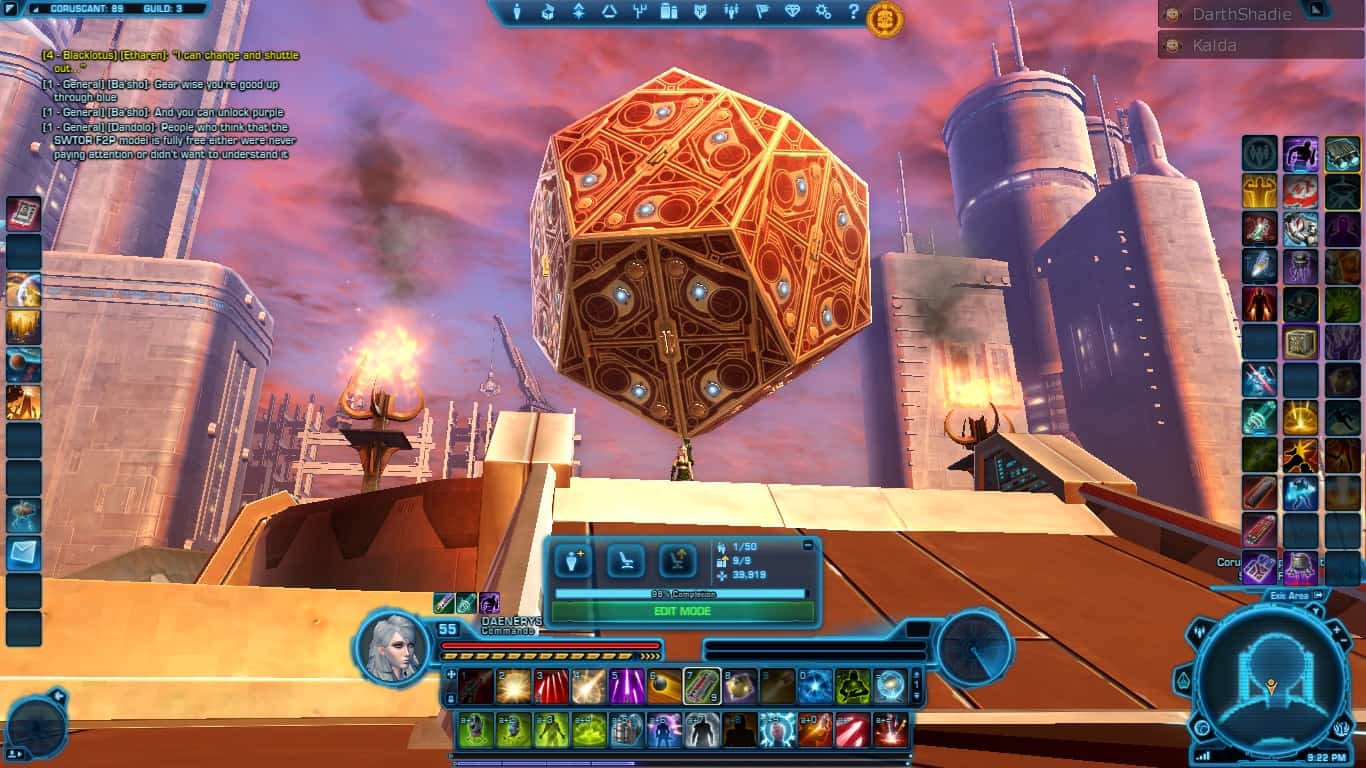 Today they still live in Rosiet’s Temple of Light, however, they are scarcely there as Coruscant has been all but invaded by the Eternal Empire. Brenum is the new Barsen’thor, keeping watch at home, while his mother and father build an alliance with some of their most trusted friends to fight this new threat. Brenum relays to his parents whenever he can, everything going on in the Core Worlds, while his parents ensure he is safe, despite him being in the heart of the new Eternal Empire thrall on the galaxy.

Although he misses his parents greatly, he is not alone. He has a long lost half brother. Long before Alagos met Rosiet, he had a brief relationship with a non Jedi whom he parted with on good terms but she moved to a more remote area of the galaxy and he hasn’t heard from her since. She did not know it at the time, but from their one night together, she got pregnant. This young man is older than Brenum, and not a Force user, but a genius. He has been able to maintain his young good looks through cybernetic implants and it’s only when Brenum’s missions brought him to work with this dashing genius, that they discovered they must be related due to how alike they look. Who is this half-brother? None other than Tharan Cedrax. This backstory was created because it just so happens that there is a customization for Tharan Cedrax that is the SAME face as Brenum’s. And we all know, where Tharan Cedrax is, Holliday follows, and they’re always a bunch of fun. So Brenum can never be bored, even if he’s not saving the galaxy from Arcann. To make the resemblance even more apparent, they are both wearing the Canderous Ordo armor set.

And that covers it for Rosiet, Alagos and Brenum, at least for now. Thanks for reading. Feel free to make any suggestions in the comments on SWTOR topics you’d like me to cover in future blogs (tips and tricks, opinions, anecdotes, reviews, content, trivia, etc.).