“Enter The Void explores the contours of reality and screen representation, seemingly probing the very nature of existence. Its final, transcendent moments summate a unique experience and achievement, albeit one not for the faint-hearted or easily offended.” 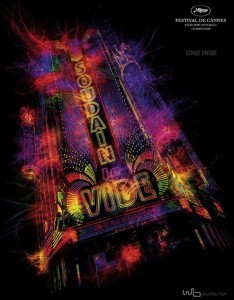 Ever since the notorious Irreversible prompted the dubious honor of causing the largest walkout in Cannes history back in 2002, Gallic maverick Gasper Noé appears to have been paying the rent with a couple of music videos, an advert for (appropriately enough) condoms, and a contributing entry to the pornography themed collection of short films Destricted whilst he struggled to secure the funding for his cherished follow-up, which screened at the London Film Festival this week. Enter The Void is less a film than an experience, more an immersion into a deranged mind, a delirious hallucination that is operating on the very cusp of the cinematic medium. Connoisseurs of extreme and outré cinema rather arrogantly adopt a posture of being unshockable, of having seen it all before these days, a gauntlet that Noé’ has passionately grasped with this psychedelic fever dream, an almost distressing viewing experience both in terms of its grievous subject matter and nausea-inducing visual construction. Make no mistake, this film is harder than a diamond dildo.

The experience is embroidered within a reasonably conventional plot – in contemporary Tokyo, specifically the hyper-real, neon cloaked playground of Shinjuku, young drug dealer Oscar is living with his sister Linda, a stripper, both Americans abroad in a sleazy megalopolis of hazy narcotics, tawdry sex and degenerate urbanity. After an ecstasy deal in a sordid Gaijin bar is exposed as a sting by the police Oscar is shot dead, his drug distressed mind not entirely sure if the terrifying experience is real or imagined. Through first person POV, a style which is employed from the opening to final frame of the film, Oscar’s disembodied avatar careens through the aftermath of his killing, viewing his sister’s life and subsequent hardships as a benign, incorporeal spirit whose flashbacks to both his and Linda’s earlier life slowly weave together a narrative that illustrates the painful nature of their lives that led to this traumatic present.

From the strobed opening titles that inexorably grow to dominate the screen the viewer is submerged into an alternate reality Gehenna, a woozy, drifting, narcoleptic texture that takes the gimmicky premise of the 1947 noir The Lady In The Lake, wherein the entire film was also mediated through the first person view of the central protagonist, Noé wielding this technique to phantasmal effect. The camera tracks, rolls and arcs from scene to scene, delving into various mise-en-scene paraphernalia to camouflage edits that evoke the stylization of Hitchcock’s Rope. As usual, the visuals are only half the story, Thomas Bangalter of Daft Punk reprises his musical duties from Irreversible to provide a complementary aural displacement with his seething, eerie soundscapes  reverberating throughout the three hour experience.

Enter The Void is a fusion of the experimental formalism of Stan Brakhage and his fascination with movement, that exploration of space within the frame, a concern with using the formalist structure of cinema to develop an abstract cadence as in the Stargate sequence of 2001: A Space Odyssey, the fractal geometries of Oscar’s serene and prismatic visions echoing the forty year pedigree of Kubrick’s journey beyond the infinite. High praise indeed since Noé’s most revered film-maker is Kubrick and 2001 his favorite film. Toward the end the visual pyrotechnics are augmented with some graphic sexual material to close the Buddhist cycle of sex and death that recoils throughout the film, one shot in particular seeming to unconsciously challenge Von Triers graphic penetration shot in the opening scene of Antichrist with a retort that provoked gasps, scattered nervous applause and slack-jawed amazement with a visual that personifies the phrase ‘extreme close-up’. Enter The Void explores the contours of reality and screen representation, seemingly probing the very nature of existence. Its final, transcendent moments summate a unique experience and achievement, albeit one not for the faint-hearted or easily offended.