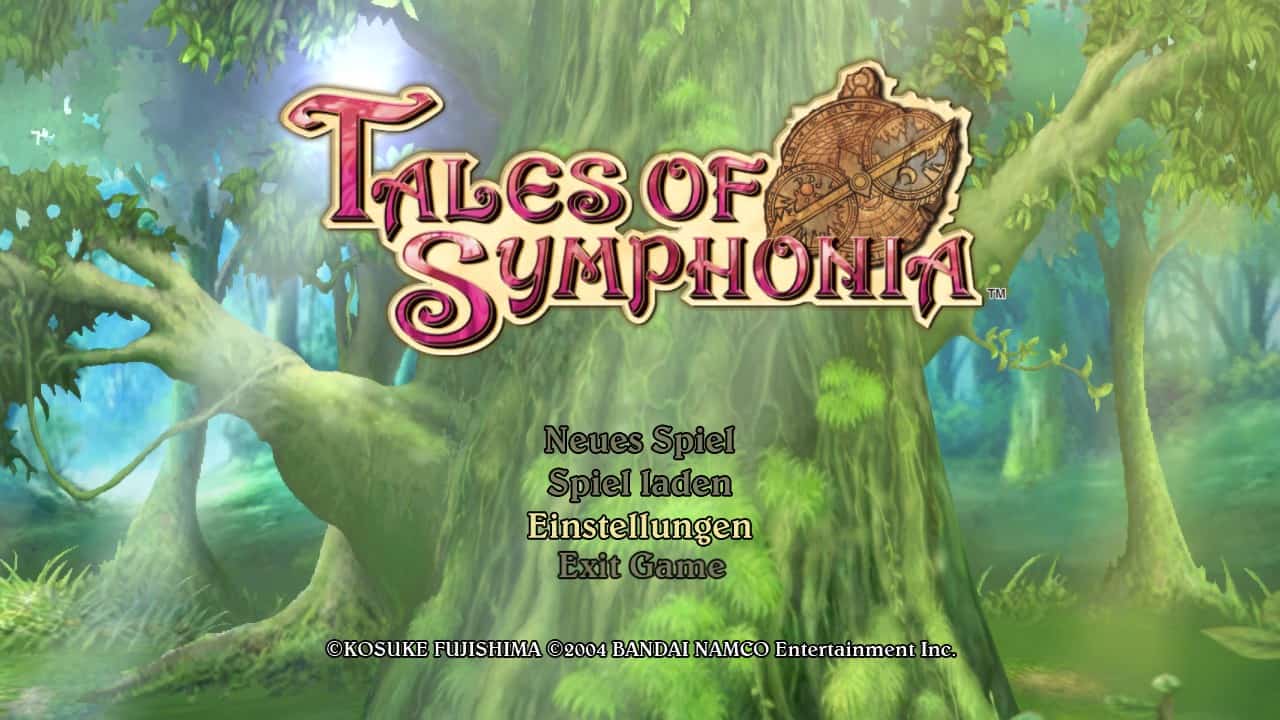 A broken German title screen is the least of this port’s issues.

Tales of Symphonia was originally released in 2003 (2004 outside of Japan) on the GameCube. At the time, it was regarded as a great addition to the purple box’s library and a good JRPG that was fun to play both alone and with friends. The story was regarded as very much “been there, done that” (and in all honesty, it’s Final Fantasy X if everyone was an idiot), but enjoyable if you can look past the clichés.

However, despite the critical and fan response, the game was not particularly successful. Namco wasn’t impressed with the sales figures, even if, ironically, it remained the best selling entry to the Tales series in North America until 2011’s (2013 outside of Japan) Tales of Xillia. It wasn’t long before the game was ported to the PlayStation 2.

The PS2 version of the game was never released outside of Japan. I have no idea why this is. The Tales series has had a very inconsistent localization record, with four entries to the main series still without North American releases and it being annoyingly common for regions outside of Japan to have to wait a few years for localization. At the end of the day, the lack of western release of the PS2 version of Symphonia isn’t all that surprising.

Unsurprisingly, some technical compromises had to be made for the less powerful PS2. The GameCube version ran at a full 60 fps, while the PS2 version had lower quality models and textures, as well as a locked 30 fps frame rate.

However, despite Namco’s disappointment with the sales numbers and only one version of the game being released outside of Japan, the game’s popularity among Tales fans endured. To this day, I would call it the most popular Tales game. Naturally, with how HD remasters are just as common as new releases nowadays, Symphonia, as well as it’s sequel, Dawn of a New World, was a natural choice for a 2013 HD remaster on the PS3 as Tales of Symphonia Chronicles. And that’s where the problems begin.

For some reason, Namco chose to port the PS2 version of Symphonia instead of the superior GameCube version. This is a completely illogical decision. It’s not like the GameCube version was published by Nintendo like the GBA version of Tales of Phantasia, so it’s not a licensing issue. I cannot for the life of me figure out why Namco would base the PS3 version on the PS2 version. 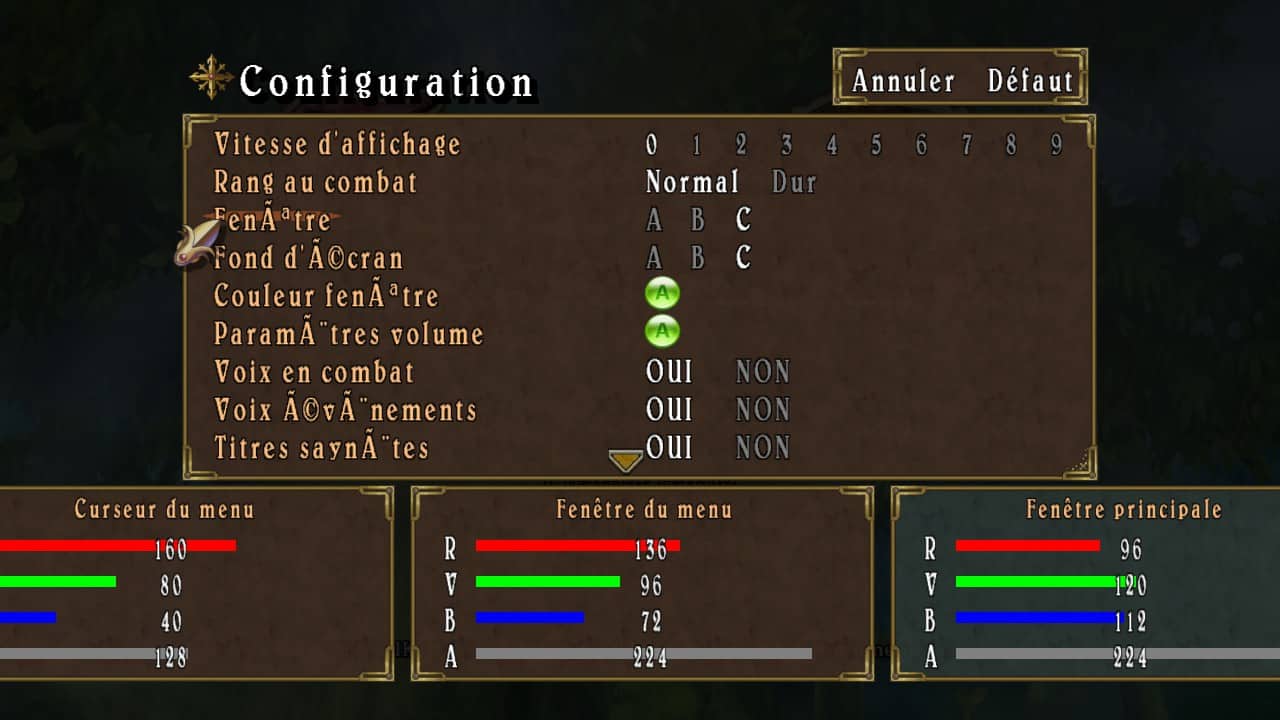 The French language is clearly unreadable in places.

This means that the PS3 version of the game is a port of a port. And not only that, but it’s not a very good port. It’s still locked at 30 fps, and the character models are clearly inferior when compared to those of the GameCube version, even if the HD textures do mean that the game looks better than it otherwise. However, the icing on the cake is that it only runs at 720p. A 2003 GameCube game runs at 30 fps and 720p on the PlayStation 3.

It’s one thing to fail to get a PlayStation 4 or Xbox One game to run at 60 fps due to over-ambition. It’s disappointing, but ultimately acceptable when Destiny only runs at 30 fps or when Metal Gear Solid V runs at a lower resolution on XB1 than on PS4. It’s a whole other thing to fail to get a 2003 GameCube game running at 1080p and 60 fps on a console that is multitudes more powerful than the original hardware.

This means, two ports and a decade later, the GameCube version is still the best playing version and, if run on a relatively powerful PC through the Dolphin emulator, potentially the best looking version of the game.

However, the game at the very least is still playable and enjoyable. While 60 fps would be nice and should be expected, especially with an HD remaster, the frame rate is consistent with no slowdown at all. It’s a competent, if very lazy and unoptimized, port.

However, if the PS3 port is disappointing and lazy, the PC port is downright insulting.

I at least understand the logic of porting the already HD PS3 port. If you’re going to release the game on PC, you might as well use the most recent version of the game, especially since the remastering work has already been done. However, it doesn’t excuse the utter incompetence of the port.

A thread on NeoGAF lists many of the issues. NeoGAF user Charimanchuck explains a surprising number of issues, some of which show that Namco just didn’t care.

Among these issues, the game is locked at 720p. While 720p was pretty much standard on the PS3, this isn’t the PS3. It is also locked at 30 fps. On the PS3, this was lazy. On the PC, this is just plain negligent. There are no graphics options besides resolution, as well.

Users are reporting random crashes. On a port of a 2003 GameCube game.

The game only allows users to keep six save slots. I don’t know if this is how the GameCube and PS2 versions were, but it is again something that is inexplicable on a PC game.

There are typos in the interface text and, presumably, dialog. This is also the third localized version of the game. Furthermore, the interface still partially uses icons for the PS3 controller.

The game uses the dirt cheap VMProtect DRM software (that apparently creates a new .exe file for the game every time it runs), despite Steam already being DRM. On top of that, not only is the GameCube version already easier to pirate anyway, VMProtect has already been cracked.

Steam reviews are “mixed” with only 47% of reviews being positive as of this writing.

Steam users are reporting many of the same issues. One review mentioned that their crashes appear to be caused by trying to upscale the game to 1080p. The same review reports audio issues with crackling during dialog.

A few reviews even report difficulty getting the game to recognize a gamepad. 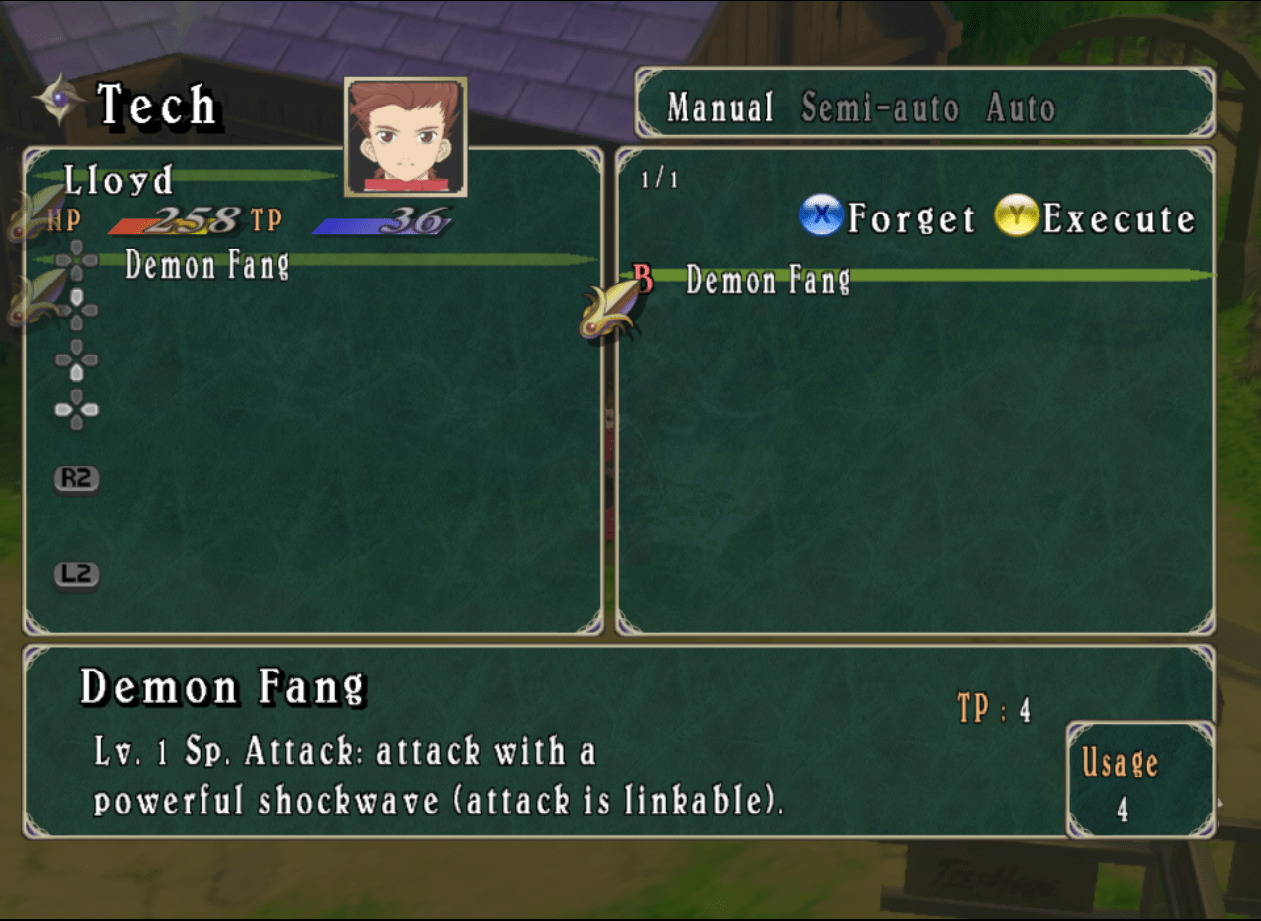 Despite hyperbole from a few Steam users, the game does appear to be playable for the most part. However, being playable isn’t the same thing as acceptable. This port is atrocious. Even if we accept that the PS3 version couldn’t run at 1080p or 60 fps for some reason or another, any such limitations that could cause these issues don’t exist on PC.

But the biggest reason this port is inexcusable is that there already existed a way to play Tales of Symphonia on PC at 30 fps and 1080p. It may not be the official way to play it, but despite getting an actual PC version, the GameCube version emulated in Dolphin is still the definitive way to play this game.

Dolphin runs the game at the native 60 fps of the GameCube original and can greatly enhance the visuals to the point where it can run well above the SD resolution the GameCube was limited to, plus allowing the game to play in widescreen with high anti-aliasing and lighting improvements. It is utterly unbelievable that Namco has released arguably the worst version of Tales of Symphonia on PC in 2016.