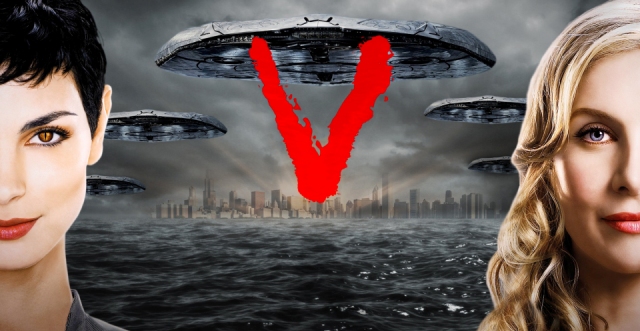 A reimagining of the Kenneth Johnson science fiction series of the same name which told the tale of the arrival of “friendly” aliens known as the Visitors, who appear human and peaceful when in reality, they have a secret agenda to enslave humanity and seize their resources for themselves. The Visitors come in highly advanced space ships and make promises to share their alien technology in return for a few choice Earth resources. The Visitors are quick to take control of their media presence and get a stronghold on the hearts and minds of the nation. Only a small group of humans are aware of the truth behind the Visitors and it is up to them to reveal and battle the threat.

Specific to this rebooted version of the series is the presence of a sleeper cell of Alien Visitors who have done advance reconnaissance and secured themselves in places of influence to better enact their takeover plans. Also the Visitors have a ruling Queen hierarchy of power with the high commander Anna as their leader. Among the Visitors there is also a rebel group of Visitors known as the Fifth Column, who oppose Anna and her cold and heartless, tyrannical ways. 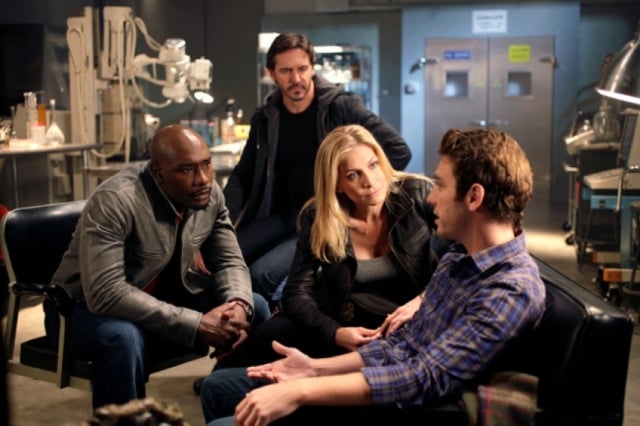 Kenneth Johnson, the creator of the original V miniseries from 1983, campaigned to revive his version of the series for many years but he was unable to acquire the rights from Warner Bros. Television, who decided to go ahead with a reimagining of the series instead. The new series began development with Scott Peters, who had made a name for himself by creating the large ensemble sci-fi drama The 4400. During post-production on the pilot of the reimagined V, further episode production was delayed due to a dispute with Johnson (who wanted his name taken off the project), which was eventually resolved in the studio’s favor, and production continued. In November of 2009, the first pod of episodes aired before the series went on hiatus until March, with the studio claiming this unconventional approach would make the series more of an event.

During the hiatus, production problems continued which prompted the studio to change up the creative team, bringing in Scott Rosenbaum (Chuck) to take over as the showrunner for the remainder of the series. The direction of the show took a sharp turn towards more mission-based narratives with a tinge of humor added, thanks to the inclusion of a new character, Charles Mesure’s Kyle Hobbes. The first season had been picked up for a full thirteen episode run, but the order was cut by one episode before the show went on the bubble for renewal. Fortunately ABC decided to pick up V for a thirteen episode second season just before the airing of the season finale. The second season premiered at mid-season and returned with low ratings that did not improve, prompting the studio to cut the season order by three episodes. Two months after the season two finale, the series was canceled.

The ways studios work sometimes can be very frustrating, especially when they own a property that has a lot of potential but that they are unable to do justice to, either because they don’t know how to or they don’t care. It shows that they do not have a sense for their audience and only want to put out a product. It’s impossible to know whether the Kenneth Johnson version of the show would’ve been successful (though he was one of the key factors in the original’s success and when he was removed from the show, it was promptly canceled). It just may be that he is the missing piece to what makes the series work. That is not to say that this remake doesn’t work; the concept is strong enough to be set in a modern day and go in a different direction and the early Scott Peters episodes are a fine example of an updated version of the show. There is a sense of awe that comes with the alien motherships’ arrival on Earth and an epic grandeur that draws from V-inspired science fiction films like Independence Day. The overall tone and imagery also takes a lot from real-life events like 9/11, grounding the reality of the situation. All of this works in the pilot well enough, but the rest of the series does not live up to the iconography of the original.

The new series does make some very interesting choices with its alien agenda and the overall culture of the aliens. The aliens are militant, cold, and calculated in their takeover plan, with sleeper cells on Earth before their arrival. This plays on the fear of terrorist threats that has been part of the American consciousness ever since 9/11. There is also an explanation of how Anna keeps her flock in line, through an aura of mind-numbing pleasure known as “The Bliss” that she expels to her followers, a distinct departure from the original. The way Anna presents herself in media appears to evoke the 2008 Obama campaign with promises of Hope, Change, and Universal Healthcare that make the series appear more like an allegory based on Republican fears of the Obama administration, claiming that they control the media and feed the public lies and false promises to attempt to dupe the masses. This allegory does not go further than the first four episodes however, as the plot threads that instill the comparison were dropped when Scott Rosenbaum stepped in as showrunner.

This updated version of the series does very little to explore its character, as each can be defined in two words: Father Jack Landry- Religious conscience, Erica Evans- FBI mother, Ryan Nichols- Alien ally, Chad Decker- Media controller, Tyler Evans- Alien supporter, Anna- Alien Queen. This simplicity is actually one of the series’ strong points, as the characters’ motivations are clear and very easy to follow. These general character types make for a very soapy narrative, which can be fun for those who don’t take the material too seriously.

Although the writing is at times silly, with dialogue that is difficult keep a straight face through, there are surprises, over the top spectacle moments, and dramatic turns that make the series very watchable. Particularly during the last episodes, V (2009) began to heat up and liven as things really got bonkers. The best aspect of the series overall is its cast, with Morena Baccarin giving it her all and playing up Anna’s evil side, until an entertaining turn causes her to develop human emotion.* Scott Wolf and Elizabeth Mitchell also have their moments to shine. Mitchell’s arc became more interesting in the second season, as she began to compromise her ethics and became more like Anna. Another highlight is the inclusion of original series V cast members, who were incorporated fairly late and not nearly enough. 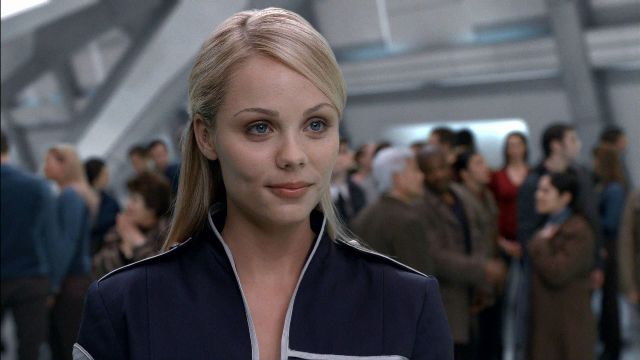 One of the weakest aspects of the series is the show’s poor production values. The VFX team did the best that they could with what must’ve been a very low television budget, but a good deal of the sets look like cheesy screensavers. There were also moments where the show would make nods to the original series, such as when Anna ate a rat**, which looked fairly awkward (though to be fair, the original series’ version of the scene was not that much better). The reptilian makeup was creepy and did look fairly good, but the CGI transformations were not as effective.

When the series really began to work the most was towards the end, when the writers went all out with crazy twists; they even ended the show by killing two series regulars in spectacular fashion. They also added in an evil twin for Laura Vandervoort, always a fun move, and it would’ve been great to see this explored further, had there been a season three. Unfortunately the series did not go that far, not necessarily because of the poor quality of the series, but perhaps because of the studio’s inability to instill confidence in their product and allow the audience time to find the show. V had potential and it went in a very strange direction, but it found its footing late and audiences just didn’t show up. This may not be the best version of what this series could be, but it is at times a very enjoyable one. 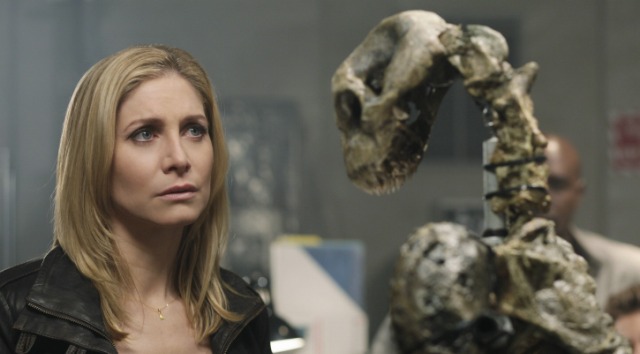 There might not be another show that is more fitting to commemorate Mother’s Day with than this series, which happens to be all about mothers and what they are willing to do to protect their children or in this case, an entire race. The themes of motherhood are built into the genetics of this series, particularly with Anna’s stronghold and issues with both her daughter and her own mother. Another reason to feature this series is because it is not often remembered well, perhaps because it does not live up to the original series, as most would’ve thought it should. There are probably plenty of reasons as to why this series is not favorably considered by critics—perhaps it’s too soapy or too cookie cutter to be a true revival of the ideas and themes of the original series—but if one disassociates this show from the original series, there is a good chance that audiences will find that there is something here that is worth revisiting.

After developing V (2009), Scott Peters went on to become a TV director for shows such as Beauty and the Beast, Burn Notice, and Reign.

Scott Rosenbaum followed his work on this series by executive producing and writing episodes for the FOX crime drama Gang Related.

Morena Baccarin followed her role as Anna with a guest spots on The Good Wife and The Mentalist and feature roles on seasons one of Homeland and Gotham.

Elizabeth Mitchell went on to star on Revolution, appear on Once Upon A Time, and feature in the main cast of season three of NBC crime drama Crossing Lines.

There are DVDs and Blurays of seasons one and two available with special features that include, for the season one set: featurettes “The Actors’ Journey from Human to V”, “Breaking Story: The World of V”, “An Alien in Human Skin: The Makeup Effects of V”, “VFX: The Visual Effects of V”, deleted scenes on selected episodes, and one audio commentary. For the season two set, there are deleted scenes on selected episodes. The Bluray also has exclusive featurettes “A Visual Masterpiece for the small screen”, “Arc of the Story: Mining the human emotion”, and a gag reel. 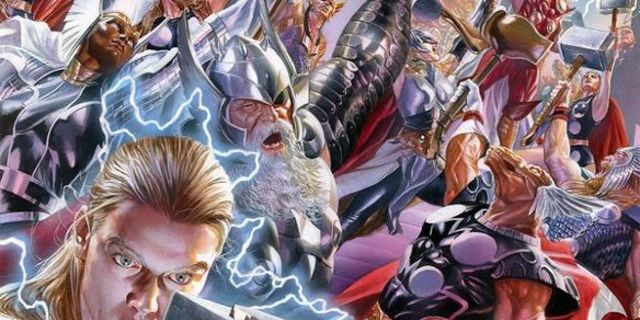 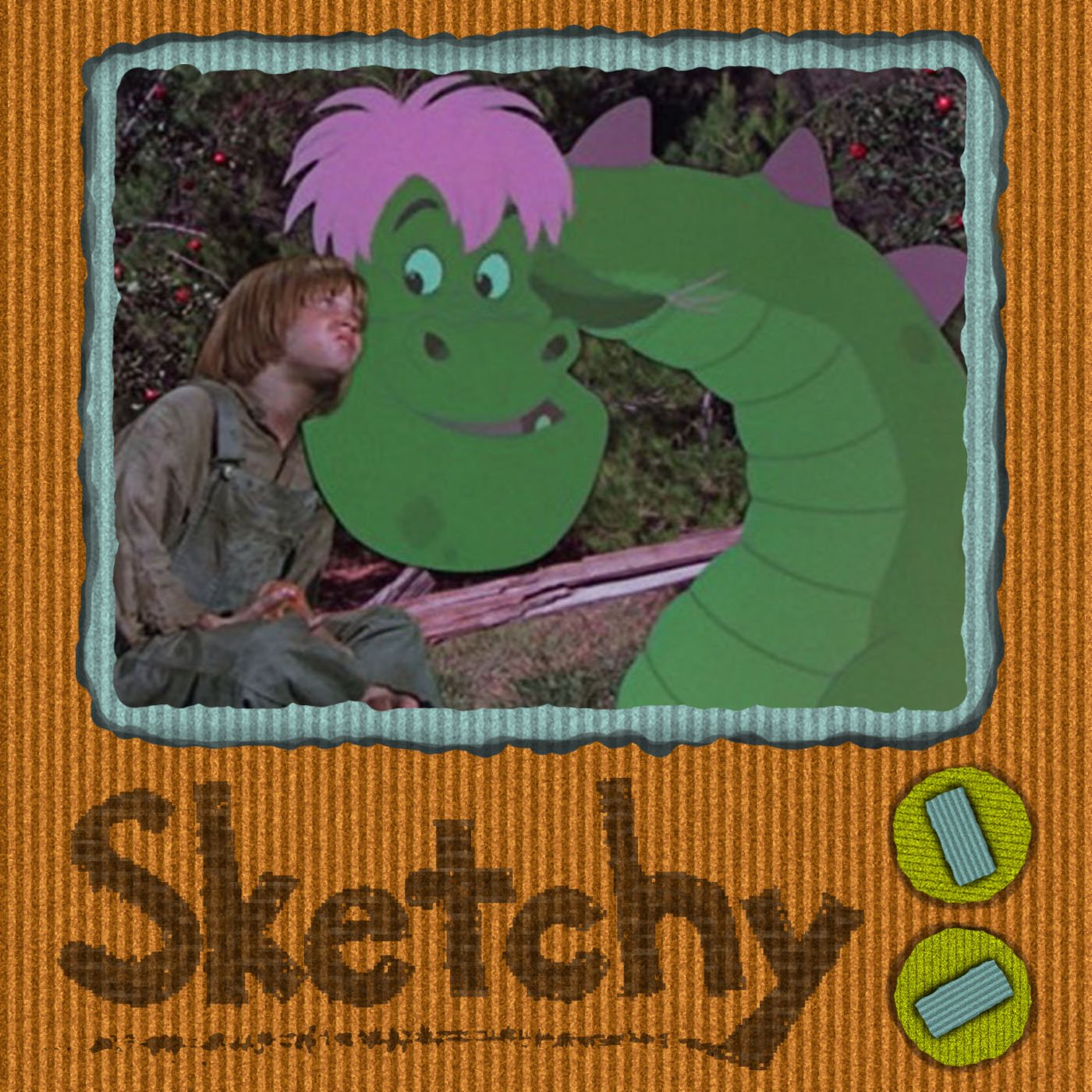