With the recent conclusion of the 73rd Golden Globe Awards and the announcing of the 2016 Oscar nominations, awards season in Hollywood is officially upon us. Now’s the time for filmgoers to binge on all, or as many of the Oscar frontrunners as possible before February 28th. Some of us get as much, if not more enjoyment out of emotionally attaching ourselves to potential nominees and winners than the actual film-going experience. Our investment in these films is such a not-so-quiet reverence of the work itself, playing favorites is one of our most cherished annual pastimes. Who we align ourselves with isn’t a complicated process. While we can side with a film for a whole host of reasons, odds are if a particular auteur’s newest offering is in the running, our selection is made for us.

If you frequently pay attention to Rotten Tomatoes scores, maybe it surprises you that Tarantino’s The Hateful Eight is potentially in the running for Best Picture. Or maybe it doesn’t surprise you, because after all, it’s Tarantino. It’s Tarantino’s eighth film, and with a directorial career as storied as his, there is always at least a modicum of discussion of what his magnum opus is with each successive release. The debate is likely to keep heating up as he gets ever closer to his tenth and final picture, whatever that may be.

Now, I admit that it is really easy to be held prisoner of the moment, and perhaps I qualify, but if there’s any film in Tarantino’s catalogue that deserve the ‘magnum opus’ title, it’s The Hateful Eight. Sure, there are plenty of moments and aesthetics that one can readily recognize as Tarantino-esque, but there’s so much more that makes this particular entry stand out in the Tarantino canon. Tarantino has built a career out of a simple formula: pay homage to a multitude of genres by defying all sorts of expectations, genre and otherwise. The fact that he often deviates from a formula of deviation in The Hateful Eight is not only fairly pretentious, but also marks itself as a highly important work of its creator.

With The Hateful Eight, Tarantino finds himself in a setting that, while not exactly familiar due to his previous filmography, is closer to his heart than all others. Though he had yet to visit the Old West is his other films, the Western, especially the Sergio Leone spaghetti Westerns of the ‘60s, has undeniably influenced his vision of highly different settings and genres. Western flavors became incredibly prevalent in his films starting with Kill Bill Vol. 1, which fit perfectly because of the similarities shared between Westerns and Japanese samurai films. Inglorious Basterds certainly had its moments, and his ‘Southern’ Django Unchained was perhaps his most overt Western-style film at that time.

Tarantino’s love of the American West is unquestioned, but the West he’s depicting in The Hateful Eight isn’t typically what anyone might conjure up when thinking of Westerns of old. The heavily snowy Wyoming setting is one of those basic genre convention deviations anyone would come to expect from Tarantino at this point. In fact, Tarantino’s Wyoming recalls the wintry landscapes of the Pacific Northwest in Robert Altman’s 1971 revisionist Western McCabe & Mrs. Miller, shot in rainy West Vancouver and Squamish, British Columbia.

Not only is the setting typically atypical, but what proceeds from the first frame isn’t much of a Western either, aside from a few key aesthetics. Outlaws, gunslingers and the conflicts that occur between them are a dime a dozen for the genre, but while those boxes have been checked, the murder mystery they find themselves trapped in is anything but all those other showdowns we’ve come to expect in the genre. Nevertheless, along with the snow covering the plains, the mixing and ultimate subversion of genres is simply the Tarantino we’ve come know, and quite possibly love, depending on your views of him. There is much more to this film that ensures it is nowhere near standard Tarantino. 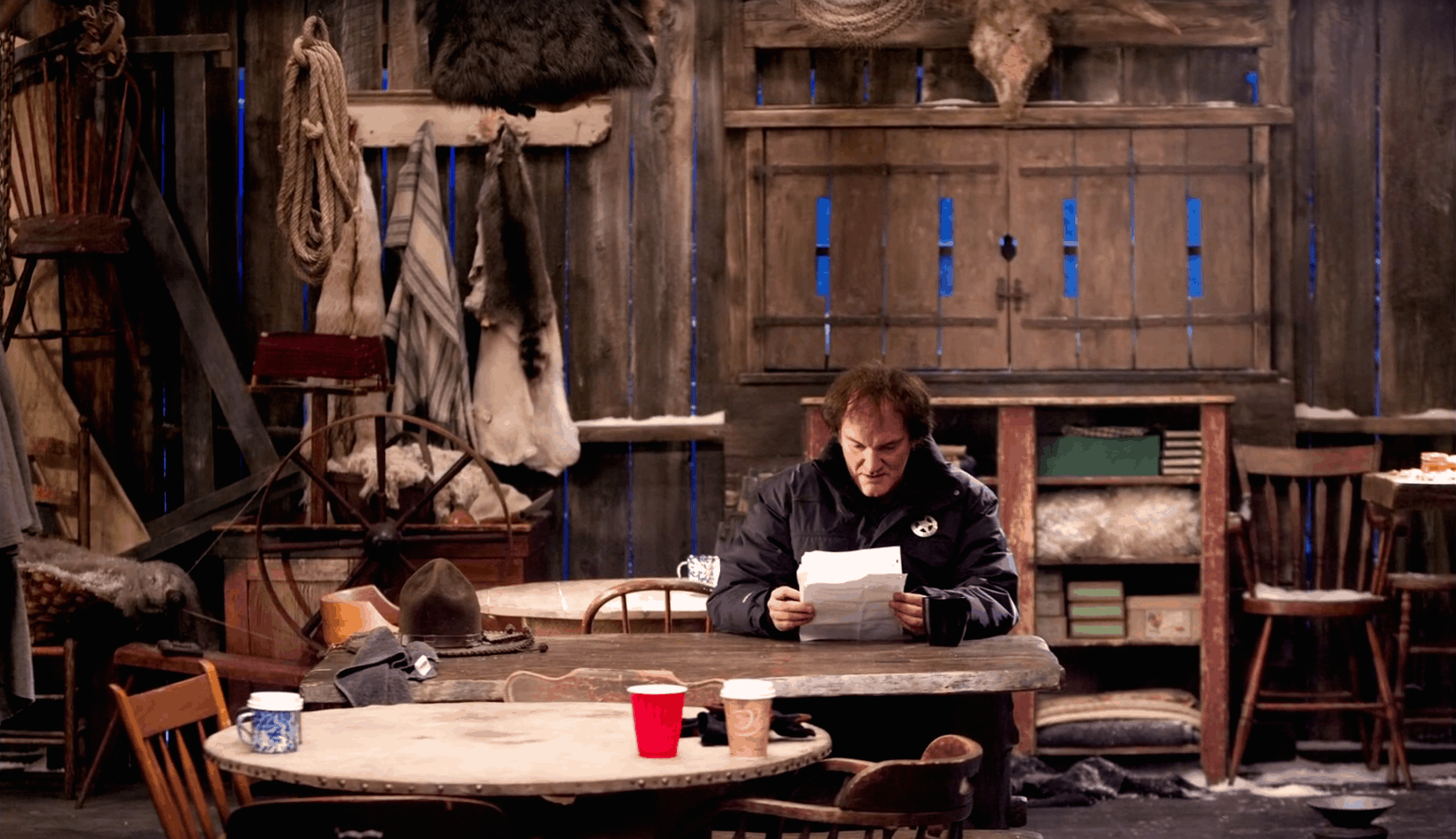 First of all, largely due to its murder mystery aspects, the film is quite the slow burn for a majority of its lengthy runtime. Clocking in at 187 minutes – the longest of any Tarantino film to date – the kneejerk reaction would be to point to its length as one of the key culprits. While its being overlong is up for debate, similarly lengthy pictures of his have been briskly paced with the help of intense, stylized violence and his popular brand of dialogue. The first two hours or so of the film are quite methodical, leaving the remaining hour to pick up the pace as soon as the first character(s) bite the dust.

Then there’s the issue of a rather peculiar score and the man who created it. Now, if you watched the Golden Globes this past Sunday, you probably saw or at least heard about Tarantino’s eccentric reverence of Ennio Morricone, the one responsible for The Hateful Eight’s original score, on behalf of his victory. This was Morricone’s first Globe in his history with Westerns. Having garnered notoriety for his collaborations with famed spaghetti Western director Sergio Leone, one might expect to hear at least a few of the typical Western music trappings. Instead, the opening selection “Neve,” sets a brooding, ominous tone befitting of the setting and the nature of the plot; in other words, absolutely not something you’d hear in Once Upon a Time in the West. In fact, the only song on the film’s official soundtrack that contains any traces of a Western score is the White Stripes song “Apple Blossom.”

Almost exceedingly different from most, if not all of Tarantino’s previous films – especially since Kill Bill Vol. 1 – is how he depicts violence in The Hateful Eight. Sure, all of the violence taking place in the last hour or so of this film is on a similar level as other Tarantino pictures in terms of sheer excessiveness, but the violence in The Hateful Eight takes on a much less playful tone. Anyone with the slightest bit of familiarity with Tarantino’s style knows of his penchant for stylized, graphic violence. His aestheticizing violence in films like Kill Bill Vol. 1, Inglorious Basterds and Django Unchained harkens back to bygone era of grindhouse cinema with such reverence that it’s hard not to enjoy all of the gunshots and dismemberment.

This time around, Tarantino’s gritty portrayal of the American West lends an uncompromising meanness to the violence. It’s certainly brutal – on par with Django Unchained in terms of gore – and rough around the edges. In fact, one of the most notable differences between The Hateful Eight and the films that came before it is the hue of red used for the stage blood. The blood in the three films mentioned in the paragraph above took on a brighter red, with Django’s being especially cartoonish. The darker, more realistic color of The Hateful Eight adds to the nastiness present throughout. Overall, in spite of the unrealistic bloodletting Tarantino was responsible for here, it seems that Tarantino took a page out Sam Peckinpah’s playbook in his depiction of the West. In a 1969 interview with Roger Ebert with regards to The Wild Bunch, Peckinpah – another of Tarantino’s obvious influences – said, “We wanted to show violence in real terms. Dying is not fun and games.” Boy, did two particular deaths in The Hateful Eight make that perfectly clear.

More important than any of Tarantino’s deviations from his own formula, however, is how he addresses issues of race in such a timely manner. Unless you’ve been living under a rock for the last year and a half, then you would realize that between Ferguson, Baltimore and most recently Charleston, race relations in the United States are as volatile as they’ve ever been. You’d be daft to buy for even a second that we live in a post-racial society, and these tensions are perfectly reflected by Tarantino’s vision of post-Civil War America.

For example, in one scene, Samuel L. Jackson’s Major Marquis Warren tells Kurt Russell’s John ‘The Hangman’ Ruth that “The only time black folks are safe, is when white folks is disarmed.” For a number of reasons, that line resonates like a real gut punch of a reality check. Living in a post-Civil War environment, John Ruth reflects those individuals in contemporary society who believe these problems were no longer an issue long after the end of racial segregation, and it’s characters like Marquis Warren who need to remind him of the elephant, or perhaps in this case elephants considering the number of white characters who wear their racism on their sleeves, in the room.

Since Tarantino typically directs a new movie every three years or so, there’s still plenty of time for him to wow his audiences twice more and wrap up a nearly three-decade career. Every Tarantino fan might anticipate both of those films with baited breath, but certainly no one is in a hurry for that day to come. Judging by its current Rotten Tomatoes score, The Hateful Eight seems to have divided opinion more than most Tarantino features, but it’s hard to deny its significance in his overall body of work. Maybe this writer’s opinion will change in six years, but for now, the bloody crown belongs to those colorful inhabitants of Minnie’s Haberdashery.