Released 75 years ago, Alfred Hitchcock’s Suspicion (1941), his fourth film to be made in the United States, was a departure from his previous films. Unlike The Man Who Knew Too Much (1934), The 39 Steps (1935), or The Lady Vanishes (1938), Suspicion eschews the globetrotting and spying that made those films so exhilarating. It’s an intimate affair, a chamber drama (or chamber suspense film) primarily led by Cary Grant and Joan Fontaine, only occasionally breached by other supporting actors. Hitchcock had rarely worked on such a minimal scale before; even in Rebecca (1940); the mansion Manderlay was practically its own character. The isolation of Grant and Fontaine’s marriage is suffocating and without precedent in Hitchcock’s filmography. Though flawed due to Production Code restrictions, Suspicion remains one of Hitchcock’s most fascinating experiments.

Joan Fontaine plays Lina McLaidlaw, a woman presumably more interested in books than men (a woman wearing glasses in a film from the 1940s is never very interested in men). While on a train, Johnnie Aysgarth (Cary Grant) joins her in her first class compartment, only to be confronted about his third class ticket by a steward. Lina assumes he must be a bum – until she sees his picture in a magazine and realizes he’s a high society playboy. The scene expertly sets up Johnnie’s central conflict: he’s grown accustomed to the luxuries that accompany wealth, but has none of the wealth necessary to sustain them.

Johnnie and Lina’s courtship is swift and seemingly romantic. Cary Grant, perhaps the most charming actor of all time, leaves no scene without at least one dimpled smile. Even Lina’s crass nickname, “Monkeyface,” sounds affectionate when he uses it. But the film also alerts us that all may not be right with Johnnie. When he first embraces Lina on a picturesque cliff, it looks more like he’s about to shove her off than hug her. His sheepish grins also become more frequent as the lies begin to mount; Johnnie has no real money to his name, so his strategy to pay for the extravagances he desires is to borrow from his friends, switching to another one as soon as he is refused. Every time Lina discovers one of Johnnie’s lies, he regretfully cops to it, only to deceive again. 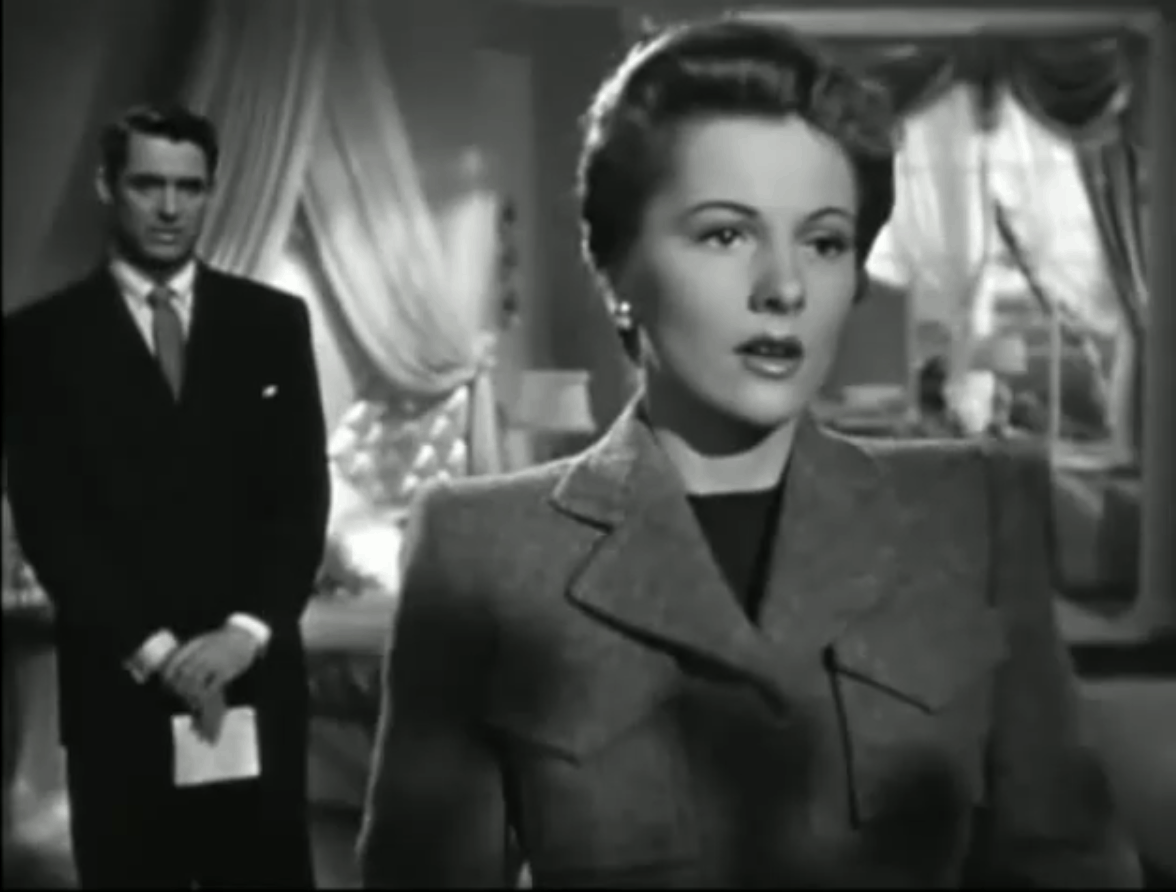 As his lies progress, Johnnie reveals his hope that Lina’s income and inheritance from her wealthy family will be able to support his lifestyle and gambling. Her income is not enough to support them, but it awakens a deeper suspicion in her. When Johnnie goes on a trip with a friend, she worries that he may try to murder him to escape his debts, and a later scene where she discovers a life insurance policy he has taken out on her leads her to suspect the worst. The lies and the suspicions only escalate.

Suspicion is a fascinating accomplishment for Hitchcock. Never one to be particularly concerned with verisimilitude, he nonetheless painted a picture of a toxic relationship that rings true in that Lina is never able to leave Johnnie, despite all the evidence of his lies (and perhaps his general disinterest in her own desires). When Lina tells Johnnie “I couldn’t stop loving you if I tried,” it brings to mind countless women trapped in toxic and abusive relationships. Cary Grant’s charm effectively shames her every time Lina even voices the smallest doubt about his claims and motivations.

Suspicion also contains one of the most remarkable examples of Hitchcock’s genius for visual storytelling. While playing something resembling Scrabble with Johnnie and his friend Beaky (Nigel Bruce), Lina ends up with letters spelling “MUDDER.” As Johnnie discusses leaving on a trip to the cliffs with Beaky, Lina substitutes a letter for “MURDER.” The camera switches to a close-up of Johnnie as Beaky muses allowed that he needs an extra “ER” to spell “MURDERER.” Lina’s imagination drifts to two figures on a cliff, as one pushes another over. Back at the game, Beaky laughs at a joke, just as he falls to his death in the premonition. Beaky’s laughter, superimposed over his falling body, takes on the character of a hysterical scream. The way Hitchcock, through visuals and editing, is able to show Lina’s growing suspicions without ever having her voice them is remarkable, and far more frightening than if she expressed her fears in a more generic fashion.

Despite its strengths, Suspicion falls victims to the whims of the Production Code at the end. In the original ending, Lina learns that Johnnie plans to poison her, but does nothing to avoid it. She is willing takes the poison, but only after writing a letter exposing Johnnie that he will later unwittingly mail. However, the morality code of the time stipulated that crimes could not go unpunished, requiring Hitchcock to use an ending that makes Lina look like a hysterical fool who needlessly mistrusted Johnnie the whole time. It brings to mind Rear Window (1954), in which Jimmy Stewart and Grace Kelly’s theories about a crime were constantly shot down, except that they were ultimately proven right. Lina has no such satisfaction at the end of Suspicion, but viewers can take satisfaction in the skillful way Hitchcock depicts this toxic marriage.