The 30th annual Vancouver International Film Festival (VIFF) is starting to finally announce their roster of films with an outstanding line-up of documentaries that celebrate the power of cinema and the arts across the Dance, Music, Theatre and the Visual Arts mediums.  Legendary filmmakers Wim Wenders , Frederick Wiseman, and Mike Figgis are among the talent presenting films at the festival this year which runs from September 29-October 14th.  Here is a taste of what to expect so far: 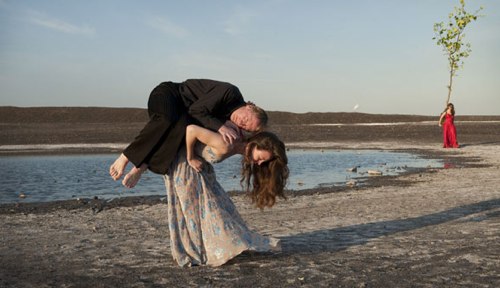 One German master more than does justice to another as Wim Wenders fashions a kinetic and gorgeous tribute to the singular German choreographer and dancer Pina Bausch. “Entertainment that will send culture vultures swooning… the film lets the artist’s work speak for itself via big, juicy slabs of performance.” — Variety

Legendary documentarian Frederick Wiseman (La Danse) continues his behind-the-scenes look at the Parisian dance world with his most entertaining and eye-popping film to date. In the can’t-miss Crazy Horse, Wiseman follows the gruelling rehearsals and preparations for Désirs, a new show at the world’s greatest and most chic nude cabaret club.

Six ballet dancers struggle and sacrifice as they endure an arduous year of preparation for the prestigious Youth America Grand Prix. Bess Kargman’s documentary captures the high stakes drama that unfolds as these young talents vie to achieve their ultimate goal. Be warned: Ballet is not for sissies.

A richly textured essay film on landscape, art, history, life and loss, Grant Gee’s much-anticipated new film offers a unique exploration of the work of internationally acclaimed writer W.G. Sebald via a walk through East Anglia tracking his most influential book, The Rings of Saturn. The first film about Sebald internationally, marking 10 years since his untimely death, it features contributions from major writers, artists and filmmakers.

Staff Benda Bilili, a band made up of formerly homeless, paraplegic street musicians from Kinshasa, has found great success in Europe. Renaud Barret and Florent de La Tullaye trace the band’s amazing story. “The music itself plays out as an exuberant blend of blues and African rumba. It’s the noise of the discarded: picked up, brushed down and made precious again.” — The Observer

While diminutive in stature, late jazz pianist Michel Petrucciani was a monumental talent. Afflicted by brittle bone disease, Petrucciani constantly risked injury with his frenetic playing style. Yet, as Michael Radford’s candid tribute reveals, the hedonistic musician was as powerless to resist his muse as he was his many vices.

The Girls in the Band

A must see! Director Judy Chaikin’s bebop documentary uncovers the startling history of female jazz musicians and all-woman big band music. From the 1940s to the swinging sounds of the contemporary DIVA Jazz Orchestra, the story of these incredibly talented pioneers roars with spirit and sound.

Spain lost one of its great singers and flamenco one of its most brilliant innovators when Enrique Morente died suddenly last December at the peak of his career, only a week after the completion of Emilio R. Barrachina’s soulful testament to this singer, experimentalist and composer’s life and art. Of interest to everyone but a must-see (and hear!) for lovers of flamenco!

By the end of a gruelling year on the road, idiosyncratic singer/songwriter/multi-instrumentalist Andrew Bird is left hobbling on crutches and ravaged by fever. Xan Aranda’s sweat-stained tour doc depicts an artist pushing both his creative and physical limits.

In 2004, Devendra Banhart, Joanna Newsom and Vetiver toured together, sharing their singular strains of “freak folk” in intimate venues. Kevin Barker’s charmingly lo-fi documentary offers an insider’s view of this “significant moment for culture” and also serves as a testament to communal creativity.

As the Stuttgart Opera mounts an ambitious production of Wagner’s Pasifal, documentarian Vadim Jendreyko supplies a riveting study of the storied company’s creative process. While the singers and orchestra’s rehearsals pulse with the expected intensity, the Herculean efforts of prop masters, set designers, wardrobe artists and technicians prove equally dramatic.

Alan Bennett and the Habit of Art

One of the UK’s national treasures, author, playwright and Beyond the Fringe founding member Alan Bennett scored a huge hit with his play The Habit of Art, about a fictional meeting between composer Benjamin Britten and poet W.H. Auden. Adam Low directs this revealing and entertaining behind-the-scenes look at the man and his art. Screens with Alan Bennett: The Southbank Show.

A bonbon for buffs of all things Broadway, [Dori Berinstein’s documentary] is a celebration and a lament—a celebration of Channing’s seven decades as musical comedy star, and a lament that there’s really no one like her anymore, a performer who eclipsed most of the roles she played by force of personality, and defined the word “trouper.” — Variety.

Reinhard Wulf follows noted visual artist Mark Lewis to the nowhere land of Toronto, where Lewis is making the short Mid day Mid summer, Corner of Yonge and Dundas, and travels with Lewis to the locations of his other Ontario-shot works. A fascinating portrait of an artist at work. Screens with Lewis’ latest piece, Black Mirror at the National Gallery.

Vikram Jayanti (The Agony and the Ecstasy of Phil Spector) turns his cameras on venerable entertainer and painter Rolf Harris as he realizes his dream project—capturing on canvas moments from A Midsummer Night’s Dream. Aided by models like Lily Cole, Lizzy Jagger and Dervla Kirwan, Harris reveals himself to be much more than just a children’s performer.