The Alamo Drafthouse collectible art boutique Mondo recently announced a “Director’s Series” of highly stylized posters, beginning with the work of renowned filmmaker Guillermo del Toro. Mondo is known for its beautiful poster art for such as the Rolling Roadshow or Fantastic Fest and famous movie franchises and now they are expanding. The posters for all of del Toro’s films, except for Mimic, will soon be available at Mondo’s official site and they’ve just revealed the first two which you can see below.

The series was announced by Entertainment Weekly, who spoke to Alamo CEO Tim League about the project.

We’ve had a relationship with Guillermo for a while. He lived here after he made Cronos and became a fixture, if you will, at the theater. Justin Ishmael, the head of Mondo, pitched him on the idea. Guillermo decided to not just approve the series but also serve as the point for approving the actual design. He’s said, ‘Yes, I like that,’ or ‘No, that doesn’t look too much like Ron Perlman,’ or whatever.

There is yet no word yet on which directors will follow.

Below are the prints. Blade II by Mike Sutfin goes on sale Thursday, along with the Greedo print. They’re 24 x 36 in size and the yellow regular has an edition size of 175 while the red variant has only 50. They’ll cost $35 and $50 respectively.

Hellboy II by Ken Taylor will go on sale some time in the future, followed by the original Hellboy, Cronos, The Devil’s Backbone and Pan’s Labyrinth. 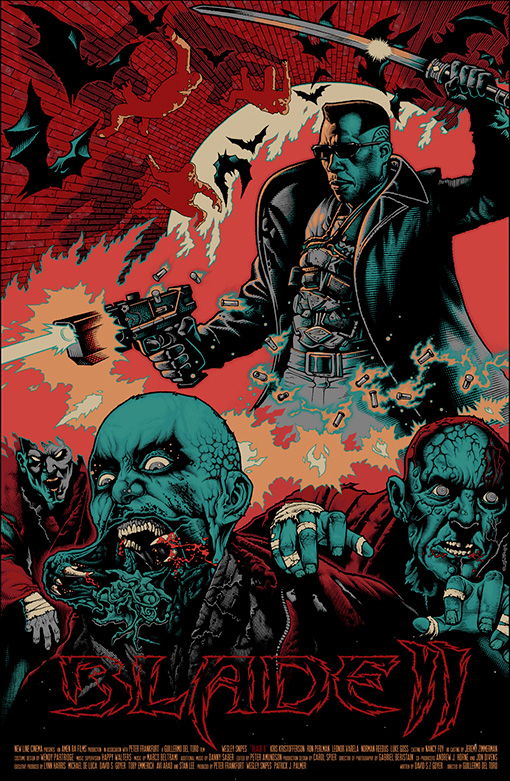