Don’t ever let them tell you they don’t make movies like they used to. With the final film on my countdown plus the fifty special mentions, I would argue they make them better than they used to. 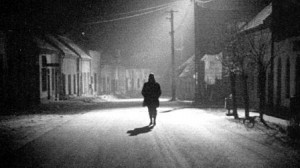 Bela Tarr is one of the few genuinely visionary filmmakers but a highly acquired taste and so Tarr’s reputation remains quasi-legendary. As a metaphysical horror story, Werckmeister Harmonies deserves to be Tarr’s breakthrough with a cult audience strictly due to its brooding atmosphere. Though never explained the film title refers to the 17th-century German organist-composer Andreas Werckmeister, esteemed for his influential structure and harmony of music. Harmonies is strung together like a magnificent symphony working subliminally on the viewer’s emotions over large expanses of time even when the viewer is unaware of what’s going on. Any attempt to make sense of Tarr’s movies in strict narrative terms is doomed and so this will be a tough watch for many. But it’s also a film packed with memorable images. Shot by a team of seven cinematographers, the film is a technical triumph. Yet one of the key components to Werckmeister Harmonies is its minimalist style, a style that went on to influence Gus Can Sant’s Gerry and Elephant. This comes through in Tarr’s very long takes. Sometimes a scene will run for ten minutes without an edit. Dialogue is very sparse, and there are often long stretches were nobody says a word. In terms of technique, Werckmeister resembles Stanley Kubrick’s work, with its classically composed images, and occasionally the early films of David Lynch such as Eraserhead and The Elephant Man, with its stark black-and-white photography. Werckmeister Harmonies is a work of bravura filmmaking. Simply exquisite it invokes a feeling of nostalgia and sadness unlike any other film. The mournful beauty of Mihaly Vig’s score will stick with you for hours to come. 6- Songs From The Second Floor

10- Virgin Stripped Bare By Her Bachelors

13- Flight of the Red Balloon 39- Me You and Everyone We Know