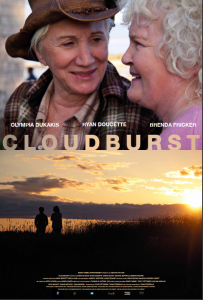 The story of two gay lovers battling against social stigma has become an old, tired genre, so it’s only appropriate that in Thom Fitzgerald’s lesbian road trip film, Cloudburst, the two leading ladies share a combined age of about 140. Initially humorous and deeply affecting, this road trip runs out of gas half way, and instead, relies on artificial melodrama to take it to its final destination.

The film stars Olympia Dukakis and Brenda Fricker as Stella and Dot, two women who have been clandestinely living together in Maine for 31 years. When Dot is hospitalized following a fall at her home, her granddaughter resolves to place her in a nursing home where she can be properly looked after. Stella, not wanting to lose her, breaks Dot out of the home and, together, they head for Nova Scotia, where gay and lesbian marriage is legal. The result is an updated, if paradoxically aged, rendition of Thelma and Louise. In its first half, Cloudburst has all the right ingredients for a classic Apatow-esque film. With likeable characters, provocative motifs, and fiery dialogue, the film has the makings of a great road trip comedy. One such ingredient, in particular, is the virtually tangible chemistry between Dukakis and Fricker. The seemingly endless amount of playful bickering and unrestrained criticizing, coupled with their unspoken, yet obvious affection for each other, convincingly portrays a relationship weathered by 31 years.

Initially, the film successfully balances the delicate equilibrium between established genre conventions and their modern, revisionist interpretations. Think, for example, how the film pairs the traditional, meek elder woman in Dot with the arrogant, hot-tempered Stella, whose brand of inventive expletives would make Stifler and Jonah Hill’s character in Superbad blush. Or consider how big city ideals are embodied in small town sensibilities. The reason Cloudburst disappoints is because, although the central premise is straightforward and purposed, the film itself often goes off on tangents that don’t add dimension or nuance to the narrative.

It is well established that the comedy road trip, where characters travel from point A to point B while encountering various challenges, is a traditional metaphor for self-discovery. The people at the start of the trip, thanks to those aforementioned speed bumps, are completely different people at the end of it. Films like Planes, Trains and Automobiles and The Motorcycle Diaries are perfect examples. This is not so with Cloudburst. From the beginning to the end, none of the characters involved have some sort of drastic epiphany that revolutionizes their outlook on life. The character arc is less an arc than a straight line. Most of the ‘obstacles’ they encounter don’t serve as a catalyst for their personal evolution at all. In one instance, after picking up a male hitchhiker, the trio is forced to split up, with Stella having to hitchhike herself. Once picked up, Stella engages in a hyperbolic spiel about her admiration for the female genitalia to a complete stranger, while Dot and the male hitchhiker discuss the artistic merit of pissing in a bucket. At the end, they meet back together. No lessons learned, minimal character development. Although humorous, one has to ask, why was it written for them to split up in the first place? The question, in fact, answers itself. It’s because it’s funny. The gimmick of old women saying filthy things has yet to lose its novelty, a novelty which the film continually mines for repeated laughs.

All of this could’ve been forgiven if the film stuck to its decidedly unconventional way of telling an unconventional story, but in the end, it still falls into convention. The film’s inevitable attempt at pathos and realization feels forced and out of place because the film never sets up the possibility that the characters could foster situations where it could realistically happen. By the end, the careful equilibrium that the film creates self-destructs.

Being the opening film at the Canadian Film Festival, Cloudburst was perhaps chosen as the introductory film because of the implied foreshadowing of the title’s etymology. But far from being a sudden, vociferous start to the festival, Cloudburst provides a pedestrian, lukewarm premiere.