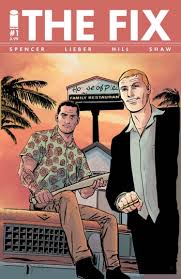 From the creators of The Superior Foes of Spider-Man, comes a story of the crooked cops, scheming mobsters, and corrupt politicians that run things—and the sex toy that can bring them all down. Oh, and the hero is a drug-sniffing beagle named Pretzels. Bad people do bad things to each other in this frenetic, outrageous, sometimes off-putting new caper! If you liked classic crime comics like CRIMINAL and 100 Bullets we apologize in advance for letting you down! – From Image Comics’ website

The Fix is an easy sell without any need of a blurb of plot, characters, or even preview art pages. If you have read and loved the slick humour embedded within the brilliantly hilarious Superior Foes of Spider-Man, seeing Nick Spencer and Steve Lieber working on the same book again should be enough to warrant a buy. The Fix is in good hands and is quite evident from the opening pages.

The Fix begins with Roy and Mac, two admittedly unsympathetic characters (as confirmed by the continuing narration), robbing a retirement centre amidst an intense g 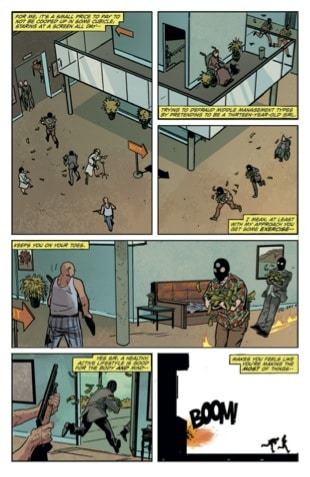 ame of Bingo in the search for a bundle of cash that one of the residents has secretly stashed in their room. Spencer and Lieber continue their flow of unexpected environments littered with laugh out loud dialogue and moments akin to Superior Foes. Though both characters are desperate, womanizing, and downright maniacal with their money-grabbing schemes (this is only the beginning of a potential rich list of bizarre, perhaps more degrading methods of getting “rich” quick) they do not faze for a moment to have some fun. For example, Mac wants to reinforce that one of the residents has received a bingo amongst all the tension and for others to show some respect.

From this first sequence of events, not much is known about Roy and Mac except for that they appear to be another pair of no-good criminals. Wrong…well, partly incorrect. Roy and Mac are cops. They owe somebody money; specifically a stressed out, freshly turned father named Josh (whose smile that appears alongside the language and acts he commits as eerily reminiscent to The Walking Dead’s Negan). A narration appears frequently amongst the first issue and never feels like an overbearing choice due in thanks to Nick Spencer’s sharp, funny, flowing script and the placements made by letterer Nic J. Shaw. The narration reveals why Roy became the person he is in the present time. Stemming from originally cheering for television villains and all their ‘against-the-system’ glory to realizing (after witnessing an attempted bank robbery, only to see the criminals get shot and killed by a police officer) that the true rule-breaking comes from within one of the most respected institutions: the police. 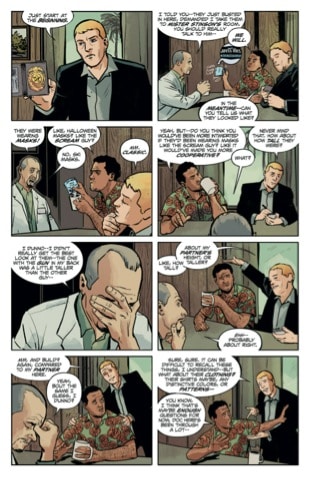 Steve Lieber’s line work is similar to someone like Michael Walsh but a bit more expressive, especially through his use of more than just faces to get across what is being said. Lieber uses the human form in a very organic way through facial expressions, hand movements, shoulder shrugging, mannequin humping, etc. to give a real sense of energy that matches up quite nicely with Spencer’s rapid fire dialogue. His art adds even more to the humour beyond the word balloons that is perfectly encapsulated within the sequence in which Roy and Mac are trying to escape from the retirement centre. A three-panel set up with one longer frame and two smaller ones to the right, captures a Loony Tunes-esque moment. Roy and Mac clearly run right past an exit sign, moving in the opposite direction in the larger frame. They go around a stairwell in the middle of the three-panel frames only to double back to where they were first situated in the first frame. Benny Hill would be proud.

Ryan Hill’s colours are fairly vibrant and bright for most of the issue, giving off a real neo-noir look to the title. Hill’s muted browns during the flashback sequences heighten the splashes of red during the violent frames; something he continues to really accentuate once things get really out of control and the action is kicked up a notch in other moments. With the combination of Lieber and Hill’s visual style, Spencer’s energetic script and Shaw’s lettering and designs, The Fix is like the comic book infant of The Big Short and Kiss Kiss Bang.

The Fix #1 has a lot going on in its first issue, revealing the dilemma that Roy and Mac have gotten themselves into amongst all the mayhem through flashbacks of the past, to characters like Donovan (whom puts a capital D in debauchery), Josh and Internal Affairs officer Sheryl Malone, it is easily understood that there is little room for purity in this day and age. The humourous approach to The Fix may not be for everyone (one would run out of a bar of soap to clean these characters’ mouths before the half way point) but the dark, edgy, slanderous language works with the fact that nearly everyone involved has at least one hand in someone else’s pocket. Though the creative team is tackling a subject matter with a tongue firmly in cheek, it is rather fitting and timely to question the morality of those deemed decent, upstanding individuals, and perhaps the language attributed to those upholding the law is in real need of a proper fix.