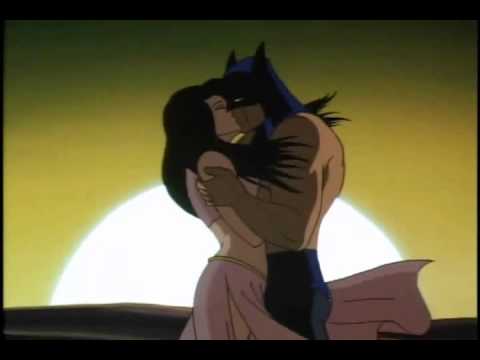 For a dark vigilante of the night, Batman sure does get around.  Over the 77-year existence of the character, Batman has gone through a litany of women with diverse personalities and Bond-Girl names.  It seems like every writer wants to create a new woman for Batman to fall in love with.  Steve Englehart created the sweet Silver St. Cloud, Doug Moench created the independent Vesper Fairchild, and Grant Morrison created the devious Jezebel Jet.  For however many countless lovers Bruce Wayne has courted, they’ve all been very diverse and fully fleshed out women.

However, what always winds up happening is that Bruce falls for these women harder than he anticipated, which causes an internal conflict between balancing his love life with his pathological need to continue being Batman.  Ultimately, Bruce Wayne always ends up sacrificing his own personal happiness in favor of the vow he made to fight crime.  Because he can’t be both Batman and Bruce Wayne, Wayne’s love life will always takes the backseat.

But who is the best love interest of Batman’s history?

It’s clear that even the writers have their own opinion on this matter.  Jeph Loeb always envisioned Batman with Catwoman, while Scott Snyder’s Batman had a soft spot for Julie Madison.  While an argument could be made for any woman to be the true love of Bruce Wayne’s life, it’s Talia al Ghul who is Batman’s greatest love interest.  Not only is she the greatest love of Batman, but she’s also one of the best female characters in all of comics.

So what exactly separates Talia al Ghul from someone like Catwoman, Vicki Vale, or even Zatanna?  For one, Batman and Talia actually love each other.  Whereas Batman and Catwoman’s relationship is based more on seduction and “The Chase”, Batman and Talia have always been portrayed as being sincerely in love.  Talia always refers to him as “Beloved”, while in the quasi-canonical Son of the Demon, Batman was willing to join the league of assassins in order to be with her.  Time and time again, we’ve seen Bruce Wayne end relationships because of the burden of being Batman, but for Talia, Bruce Wayne was going to give up Gotham City, and join his nemesis, Ra’s al Ghul, just for the chance at happiness with Talia.  Even though he was still dressed up as Batman, Bruce Wayne was essentially giving up his mission to rid the streets of crime.  This is something that he’d never even contemplate for Catwoman or any other woman for that matter.

Even when they do argue, Bruce and Talia sound like a married couple who have been married for decades but are too stubborn to actually listen to each other.  The things that they argue about are really just mundane things glossed up for a superhero comic. Except when Batman and Talia get into an argument, it involves terrorist organizations, an international cell of Batmen, and half-a-billion-dollar bounties.  They fight about custody over their son Damian, Bruce not wanting to join the family business, and where to live…things that every married couple fights about.  No matter how homicidal Talia is, and how many other women Bruce Wayne is dating, they will always be a family.  The two are kinda sorta even married to each other, as they at one point both consented to be married.  How many other women can say that they’re married to Batman?

On top of this, Talia also made Batman a father.  She took a billionaire playboy/masked vigilante and turned him into a dad.  You have to assume that someone with as many dalliances as concussions and no desire for long term relationships would be pretty responsible when it comes to contraceptives.  After all, Shondra Kinsolving and Rachel Caspian never had any pregnancy scares.  This can only imply that Batman knowingly disregarded any sort of contraceptive while having sex with Talia because he was trying to get her pregnant.  Although Grant Morrison, the creator of Batman’s son, accidentally retconned it so that Talia date-raped Batman, he admitted that this was a mistake on his part, as he had misremembered the events of Son of the Demon.  Damian Wayne was in fact born under mutual consent.  In simpler terms, the only woman who Bruce Wayne wanted to procreate with was Talia al Ghul.

Another reason why Talia is the perfect love interest for Batman is because she understands the dichotomy between Bruce Wayne and Batman and appeals to both egos.  Batman’s relationship with Catwoman is remarkably different from Bruce Wayne’s relationship with Selina Kyle.  Julie Madison, Vicki Vale, and Silver St. Cloud were all in love with Bruce Wayne and not Batman, while Batwoman only knew and loved Batman.  Talia accepts and loves both Batman and Bruce Wayne, and likewise Talia is loved by both Batman and Bruce Wayne.  Neither persona can ever let her go, or cut her out of their lives, as has been done to every other love interest.  She doesn’t care that Bruce Wayne is Batman, nor does she care that he’s not Batman all the time; to Talia, there is no distinction between personas.  Talia just wants him to be with her.

Even when she waged her war against Batman and created Leviathan, it was all because he rejected her offer to be a family with their son.  Had he followed her after the Gibraltar incident back in Batman #658, Talia wouldn’t have gone off the deep end like she did.  He left her dejected, and as a result, Talia went to prove that old adage about scorned women true.  If she didn’t care about Batman would she really have formed a terrorist organization just to get revenge on him for rejecting her affections, however devious they might be?  And remember, this was also the same Talia who killed Jezebel Jet for her part in handing Bruce over to the Black Glove.  Clearly she has feelings for Bruce Wayne stronger than any other woman ever has.

Batman, for all his stoicism, can’t get over Talia either.  He secretly loves their cat and mouse games because it reveals to him that there is no one on the planet.  The whole purpose of Leviathan was to create a labyrinthine, Scooby Doo inspired mystery worthy of Batman’s skills.  And aside from the whole death of his son bit, Batman loved rising to the challenge to uncover the mystery behind this new terrorist organization.  It gave him a purpose, and unlike Superman or Flash, Batman needs his foes and their mysteries to give him one.  He can’t exist without it. Through Leviathan, Talia gave him the ultimate purpose of trying to choose between saving the world and saving their son.  If Batman didn’t love Talia, he wouldn’t play their games or participate in their lover’s quarrels.  It’s because Batman loves Talia that he goes out of his way to rescue her from her father’s staged kidnappings.

As all lovers should do, Batman and Talia reveal truths about each other to one another.  Talia knows Bruce more intimately than anyone else and is able to antagonize him by dangling the faintest hopes of a happy ending in front of his eyes.  She knows that Bruce wants to be with her, but that he can’t give up being Batman for her, so she berates him for his masochistic tendencies.  Conversely, Bruce knows that Talia isn’t really too serious with carrying on the legacy of Ra’s al Ghul, but that she really does it just to spite him.  He knows that she just wants his attention and for him to love her, yet he withholds his affections until Talia reforms.  He loves the games she plays because it shows that she cares, that’s why he never turns her in and lets her get away. 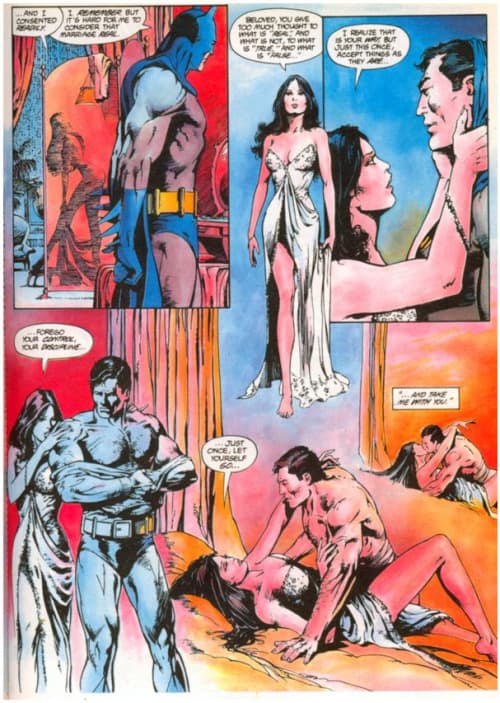 Nothing’s crazier than love, and these are two crazy people in love.  But oddly enough, it’s one of the best romances in mainstream comics.  Whereas Catwoman, the closest rival for Batman’s love, is more like his mistress, Talia is superficially Batman’s wife.  She is his equal in every way, someone who can stay one step ahead of the world’s greatest detective.  Batman is to Talia what Nick Carraway was to Jordan Baker, an esoteric and aloof enigma.  She wants Batman to love her, but is unwilling to work for that love.  On the other hand, Batman has often rejected her idealistic notions and will never explicitly state his true feelings for her, partly because he knows that is what she wants to hear.  They somehow manage to bring out the best and worst qualities in one another and finding that special someone who can do that is a rarity in life.

The Joker once said that “The Joker must have the Batman.  Nay the Joker deserves the Batman”.  The same rings true for Talia al Ghul.  Talia must have the Batman, and the Batman deserves Talia.  Like two missing puzzle pieces they fit into each other’s lives perfectly.  The reason why they will never be together, however, is because they are so entrenched in their parents’ shadows that they can’t reach one another.  At least they’ll always have that one night in the desert–and Damian–at least until Talia decides to kill him again.