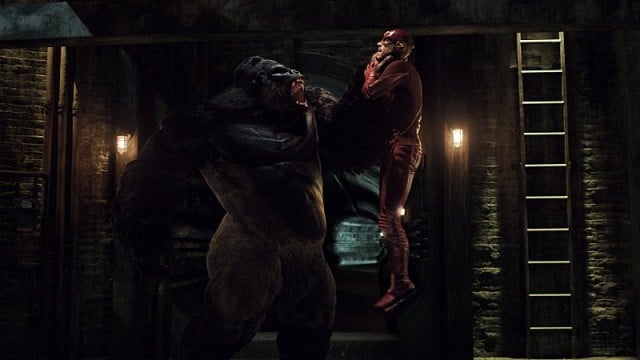 This week on The Flash, Harrison Wells is still holding Eddie Thawne prisoner. Iris knows a secret, but doesn’t know how to tell Barry the truth. Meanwhile, a bank-robber is causing a serious headache for the police, but there is something off about him.

A Gorilla Grodd episode has been on the wish-list since the pilot, where a broken cage read ‘Grodd.’ Was this simply a little poke at fans, or actual foreshadowing of things to come? At the time, it honestly felt like wishful thinking, but here we are, at an episode where Flash fights a giant telepathic gorilla in the sewers.

Things start out simple enough. Iris narrates that she is faced with a dilemma: approach Barry and let him know that she knows his secret, or wait for her trusted best friend to open up to her. It is clear which way is the right way, and how much Barry has hurt her by keeping this from her for so long.

In the meantime, Eobard monologues to Eddie while holding him captive. In an oddly delightful way, Eobard enjoys gloating over Eddie, who he deems a lesser member of the Thawne legacy, going as far as to show him the future newspaper, with the byline showing Iris having married Barry, to break Eddie’s spirits. It is clearly working, but one can’t help but wonder what the end-game is for all this. Why go on about the delicacy of the time-stream while, at the same time, being the one responsible for ripping it apart? This is alluding to something bigger, but the question is what, and there is no sign of an answer yet.

The first major development comes from a very Deathstroke-esque figure robbing an armored car with some major artillery. Barry is unable to stop him, due to getting some weird flashes (no pun intended) of some kind of medical experiment, which debilitates him. After Barry and Joe are able to thwart a second attempt to score the gold, it turns out it was General Eiling the whole time! Well, crisis of the week solved, on to figuring out what Eobard is up to.

Or it is, until the gang gets Eiling into a containment cell, only to discover that he is a zombie. The following sequence of a mind-controlled Eiling spouting Grodd gibberish to Barry is the kind of nonsense that Clancy Brown does best. If anything, this is the sole highlight of the episode, to hear Brown belch out, “I…am…GRODD…fear me…” 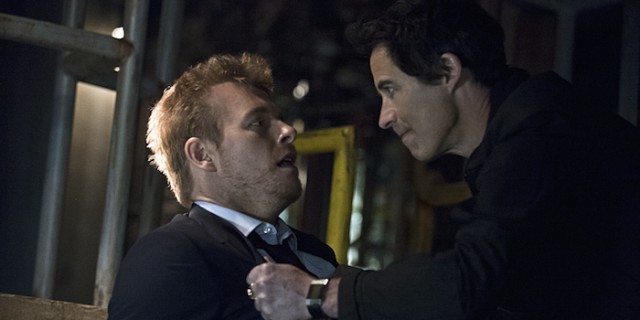 As far as Gorilla Grodd goes, he is one of the better villains that has shown up, ranking with Captain Cold and Trickster. Grodd is a direct translation of his comic-book counterpart. He is a giant telepathic gorilla and is presented as such. It really works, with the weirdness being embraced as part of a world where a man can run super fast and a time-traveler can murder scientists. The special effects on Grodd look good, mainly because they keep him cloaked most of the time in shadows, but if that is what it takes, then so be it.

Grodd is even one of the more effective bad-guys, having a power that seems overwhelming, even when fighting a hero with speed. His ability to control minds is used to cause one unsettling scene, namely the one where he has Joe nearly shoot himself while Joe begs him not to. It is a moment of odd terror, one that The Flash usually doesn’t do. It doesn’t last long, as the first thing that Joe does after Grodd releases him is offer Grodd a banana. Because that is what you do when face-to-face with a psychic gorilla.

This week also lays to rest, finally, the curse of Iris. She knows, oh thank god, she finally knows. No more tip-toeing, no more hearing endless excuses from Barry or Joe about why they have to keep her safe, blah, blah, blah. She knows and is rightfully mad at everyone, especially Joe for not trusting her enough to think that she could know and keep herself safe, and Barry for not being a good enough friend and telling her. To some people, Iris may come off as mean, but she is laying down the law this episode in a way that needed to happen. It is so satisfying to have her also be the one that saves Barry in her first episode as part of the Flash support team. Thank you to the writers for proving that having Iris know about the Flash makes her more useful.

“Grodd Lives” is a fun episode, one that takes a breather from the overall Eobard plot to focus more on the family relationship of Joe, Iris, and Barry, and the episode is all the better for it. It is an incredibly cheesy episode, what with a giant mind-controlling Gorilla and a bellowing Clancy Brown, but it is the kind of cheesy that makes The Flash such an enjoyable show. 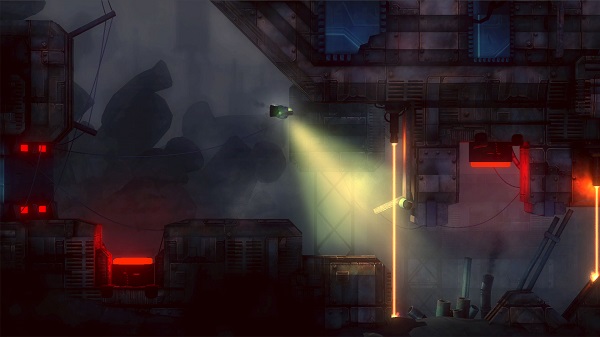 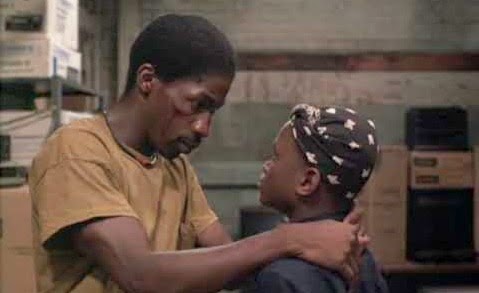