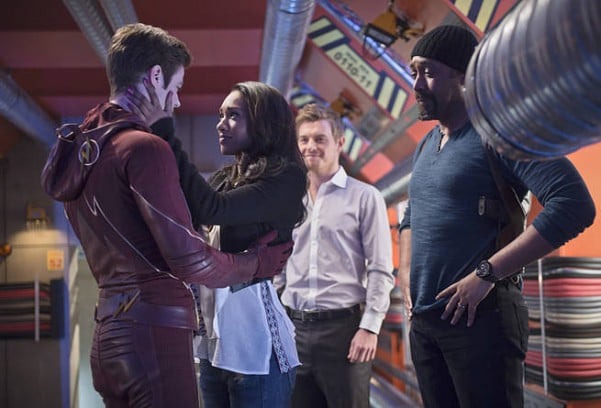 This is the moment Barry has worked for his entire life; the chance to prove his father’s innocence.  He has captured Eobard Thawne and finally can get some answers for that fateful night his mother was murdered. But the Reverse-Flash offers Barry an alternative.  He can use the particle accelerator to travel back and save his mother, while also allowing Thawne a chance to return to his time in the future.  Will Barry change the future in order to save his mother and free his dad?

“Fast Enough” sets the stage by giving Barry the chance to have what he always wanted; answers to what happened the night his mother was killed.  He has dedicated his entire life to proving his father’s innocence, and right in front of him is the man responsible for everything, including Barry being hit by lightning and becoming the fastest man alive.

The moral question at the forefront of this episode is if someone should have the ability to change history.  Barry can go back in time and save his mother, keeping his father from ever going to prison, but at what cost?  Would he lose his connection to Joe and Iris?  Would he ever met Cisco and Caitlin?  Would he even become the Flash?

What is most interesting about this episode is how it is structured around Barry coming to one decision.  There is no supervillain on the loose, no grand battle on the horizon, there’s just the question of whether it is right to change the past.  This works better than most of the other episodes of the entire season.  It is in no rush to get Barry to the point where he goes back in time, and instead lets the drama play out amongst the cast.  This is where the show lets its stars shine.

As Barry meets with each individual person, it showcases each actor, and they all get a chance to really sell the emotional weight of his decision.  Each scene between Grant Gustin and the rest of the cast is heart-breaking, especially with the realization that every connection they have could be severed and made non-existent in the course of saving Barry’s mother.  This painful revelation really makes the final conversation between Joe and Barry the most resonant. 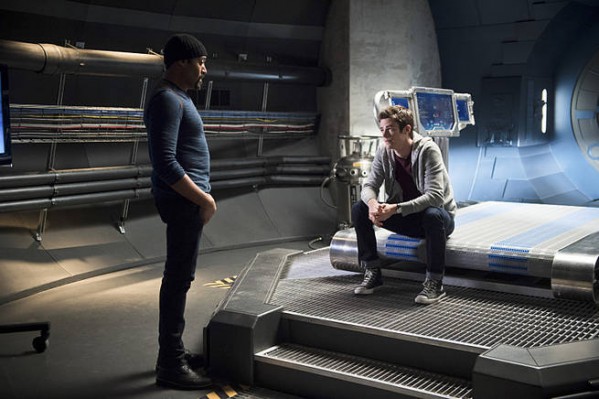 Jesse L. Martin is the highlight of this first season of The Flash.  His consistent performances on a weekly basis as Joe, being the moral compass as well as the primary father figure, have been delightful.  It is heartbreaking to see him willing to sacrifice all of his love and being Barry’s dad so that Barry can have a life free of the turmoil caused by Eobard.

Grant Gustin also gets to show just how much his Barry has evolved through the whole of the season.  The first half of this season stressed Gustin’s ability to play the lighthearted nice guy, giving Barry a truly heroic side that was just the right level of goofy to set him apart from the darker, more serious heroes in other shows and media.  But the last half of the season, and especially this episode, shows that Barry tearing at the seams.  Gustin’s performance gets at Barry’s struggle, showing how young and unsure he is of his power and what to do with it.  His shining moment comes when he watches his mother die and has to stand by and do nothing as it happens.  Seeing the pain and torment on his face as he slowly closes the door, and is unable to block out the sound of his mother’s murder, is brutal.

That brutality doesn’t end, but instead, it continues to build, as it is revealed that Barry didn’t come back to save his mother, but to comfort her in her final moments, assuring her that he will be okay after she is gone.  Barry has to accept that things are the way they are, and that he is not the one who gets to decide what gets to change, even if that means losing his mother forever.

We are defined by the choices we make.  This version of Barry is made up of the influences of people like Joe and Iris on his life.  That is what makes him the Flash, and that is what gives him the moral compass that he has to be a hero.  This entire season has been Barry fighting people who were all, like himself, given superpowers, and the primary difference between him and them is how that power is used.  In the end, this is the ultimate test for Barry, to have to sacrifice what he wants most in the world for the sake of others. 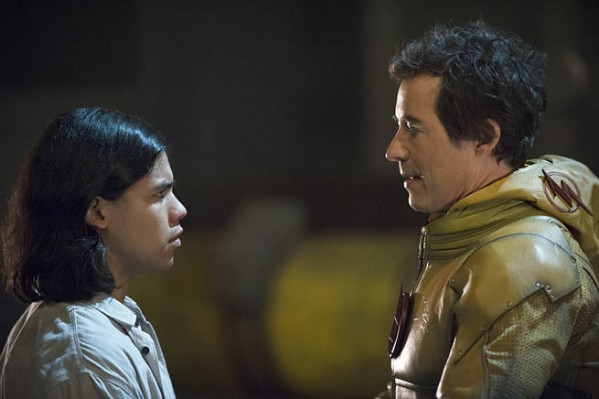 Even more surprising is the true heroic sacrifice of the episode not just being Barry’s refusal to alter history.  Eddie has been having a rough time of late.  Eobard’s musing over his place in history sunk in and caused him to retreat from life, concerned that nothing he does will matter.  He can’t have Iris, and he will never matter in the grand scheme.  During a conversation with Dr. Stein about coincidence, however, he realizes that he has the most control over his life, and the spark of life returns to him. He is able to regain his drive, which leads him back to Iris, and eventually to the particle accelerator.

In a moment similar to the ending of Looper, Eddie makes the brash decision to end his life, erasing Eobard from existence.  It’s a satisfying ending to the arc that Eddie has been building to. When Eddie’s family connection to Reverse-Flash was revealed, many fans expected Eddie to resent Barry and his team, and plant the seeds for the future Eobard to hate Barry.  The past few weeks seemed to support this theory, so by subverting the fan’s expectations, the writers add power to Eddie’s final act of redemption.

The episode is capped off with the time-traveling wormhole erupting into a singularity, threatening to consume the entire world.  While it is never stated outright, there is a reason to assume that Eddie erasing Eobard created a paradox, since they would have never been brought together without Eobard. This wormhole could be destroying a timeline that should never exist.  The finale ends with Barry being the hero once more by doing what he does best, running.

“Fast Enough” is a brilliant cap on a fantastic first season for The Flash.  It quickly set itself apart from its sister show Arrow by having a lead hero who is more light-hearted than the stern and brooding Oliver Queen.  The writers have built an entire universe inside the show that is set to explode in the upcoming season, and in the spin-off series Legends of Tomorrow.  While the time-travel can be difficult to wrap one’s head around, the show depends more on the drama of the characters than on the sense of the plot.  “Fast Enough” works and gives season 1 of The Flash a great finish.  Until Season 2, may the Speed Force be with you! 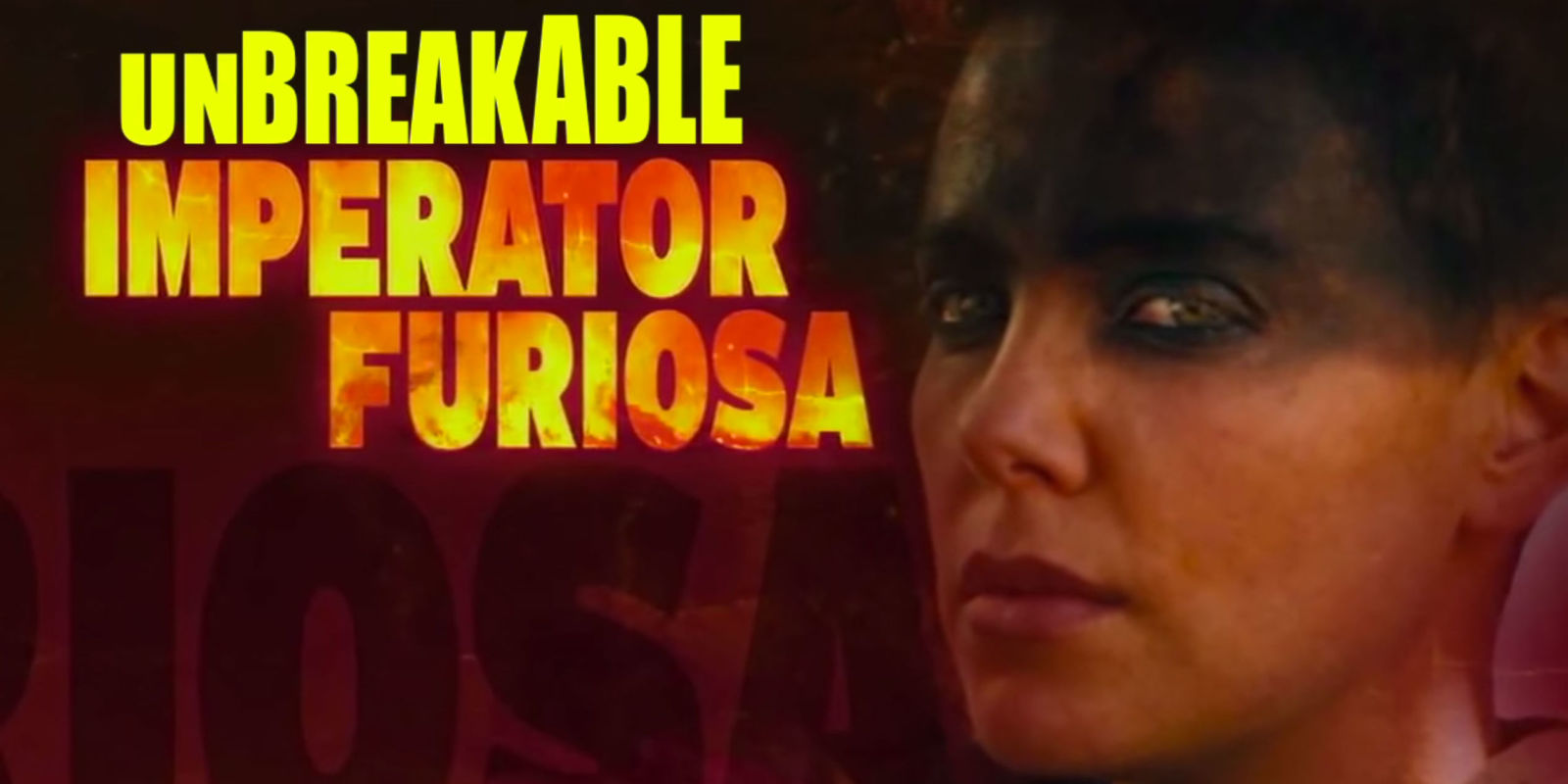