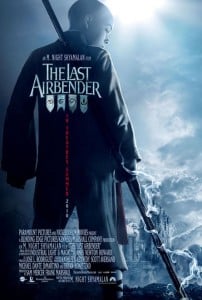 M. Night Shyamalan has had a tough time of it. Since his breakthrough classic The Sixth Sense in 1999, he hasn’t been able to find the right balance to please both critics and the public alike. Signs was his last film to be shown some respect, but for some obscure reason critics just love to tear each of his releases apart and his last two films in particular; The Lady in the Water and Happening, were some of the most unfairly lambasted movies in recent memory.

It’s infuriating to see such an assured, passionate, inventive, talented, and consistent writer / director pulled apart so unfairly. So when the first reviews for his latest film emerged as even more scathing than usual, it was hard to believe them anymore.

Sadly, it would seem that for once the critics have gotten it partly right. Somewhat as a reply to all the unrelenting criticism, here Shyamalan tackles a film that is unlike anything he’s done before. Adapting the much-heralded anime-inspired US kids’ TV show Avatar : The Last Airbender (no points for guessing why the original title was dropped), he set himself the challenge of working from someone else’s story for the first time, dealing with mammoth Lord of the Rings style special effects for the first time, an entire cast of children, and, unlike his other films, a huge budget which in return would expect a huge opening weekend. It was a lot of pressure and you have to admire his zeal to step so fully out of his element.

That said, the movie is a mess. The problems are numerous, but largely fall on the shoulders of being too enamored with the concept of the original TV show and not the character and charm of it. Billed as the first in a trilogy and framed as such, Shyamalan is desperate to fit in the entire first series of the show into just 103 minutes. This leaves the film with no time to breathe and very little room for the audience to warm to the characters. The set-up blisters by at such a pace as to seem like a sketch for the real thing and never feels comfortable with itself until the final reel. The script is clunky and isn’t helped by some below average acting from almost all of the children. Only Dev Patel (Slumdog Millionnaire) emanates any real charisma as the exiled fire Prince Zuko. The lead, Noah Ringer, is sincere and well-trained enough to make his now iconic character Aang work in the live-action realm, but there’s little of the fun and humour that perforates the original show. It’s an immense shame as the mythology and storyline is classic, epic, fantasy entertainment and it’s certainly an enjoyable film to a degree simply due to the great source material, but it fails to ever capture the spirit and verve that Shyamalan was so obviously aiming for. To its credit it has some gorgeous effects and set pieces and the fight scenes are thrilling and entertaining in parts. The ending picks up the pace massively, and by the time the finale has built to its crescendo it’s exhilarating and moving, due mostly to the gorgeous rising score by Shyamalan regular James Newton Howard. In these final moments, they manage to capture the tingling excitement that this sort of fantasy epic needs in order to survive amongst the droves of similarly themed titles out there, and you might just leave the cinema moderately excited about the hopeful promise of the next installments.

Sadly, at the end of the day, Shyamalan hasn’t done himself any favours, which is a real shame. The immediate backlash toward this film was so harsh that Universal immediately decided to drop his name from Devil, the first in a line of genre films he is producing. Regardless of how successful his latest movie is or isn’t, it’s a disgrace that he’s become such a target when he’s one of the most interesting and consistent auteurs working in Hollywood today.